An international team of researchers has put together a brilliant 3D video map of the nearby universe out to a distance of 300 million light-years. This map shows our immediate intergalactic neighborhood through a series of dynamic rotated, panned and zoomed 3D representations.

It's the most detailed map ever created of our local vicinity. The map also shows the distribution of dark matter and energy. We can’t visually see this, but scientists can deduce its presence by its effect on the motions of galaxies and stars. Dark matter constitutes about 80% of the total matter in the universe. The properties of the local universe were determined by analyzing redshift surveys and measurements of odd-ball velocities.

The observable universe is over 93 billion light-years in diameter, and this cosmography of the local universe represents about 0.32% of the "whole thing". Our Milky Way is situated within a supercluster of 100,000 galaxies.

The video was announced last week at the conference "Cosmic Flows: Observations and Simulations" in Marseille, France. The findings are set to be published in the Astronomical Journal, but can also be read at arXiv: “Cosmography of the Local Universe.” Cosmic Flows project is an effort to map both visible and dark matter densities around our galaxy up to a distance of 300 million light-years. 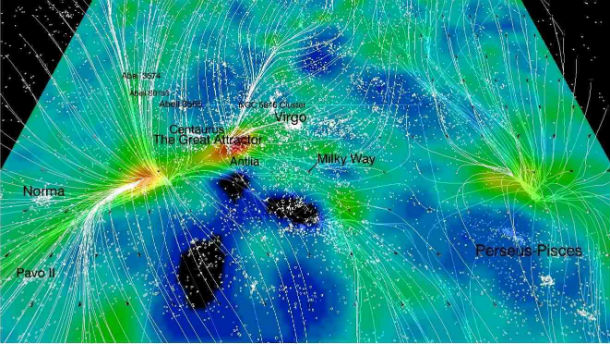 Featured image: A map showing all galaxies in the nearby universe. Each galaxy is color-coded to signify distance, with blue representing the closest and red signifying the most distant — up to 300 million light-years away. (Credit: University of Hawaii)