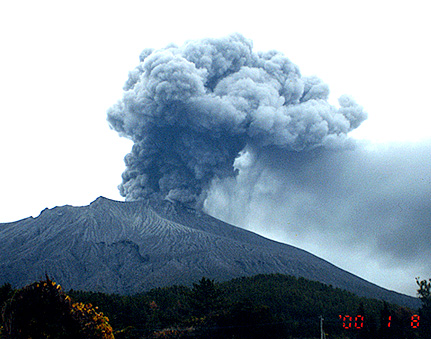 For several days Sakura-jima volcano in Japan has been relatively calm and inactive. That period is now over as the volcano already erupted at least three times on May 30, 2013.
A new cycle of increased explosion frequency seems to have started, and those cycles usually last a few days (VD). Sakura-jima is well known for producing violent explosions.

Tokyo VAAC detected multiple plume emissions on May 30, 2013, but they only reached low altitudes, posing no direct threat to aviation.

JMA reported that during May 20-24 Sakura-jima's Showa Crater had eight explosions, ejecting tephra that fell at most 1.3 km from the crater. Crater incandescence was occasionally detected at night. Based on information from JMA, the Tokyo VAAC reported that during May 23-26 explosions produced plumes that rose to altitudes of 1.8-2.4 km and drifted E, SW, and W. On May 24 a pilot observed an ash plume that rose to an altitude of 3 km (WR – GVP)

You can observe today's eruptions at Sakura-jima in the video below:

Sakura-jima, one of Japan's most active volcanoes, is a post-caldera cone of the Aira caldera at the northern half of Kagoshima Bay. Eruption of the voluminous Ito pyroclastic flow accompanied formation of the 17 x 23 km wide Aira caldera about 22,000 years ago.

The smaller Wakamiko caldera was formed during the early Holocene in the NE corner of the Aira caldera, along with several post-caldera cones.

The construction of Sakura-jima began about 13,000 years ago on the southern rim of Aira caldera and built an island that was finally joined to the Osumi Peninsula during the major explosive and effusive eruption of 1914. Activity at the Kita-dake summit cone ended about 4850 years ago, after which eruptions took place at Minami-dake.