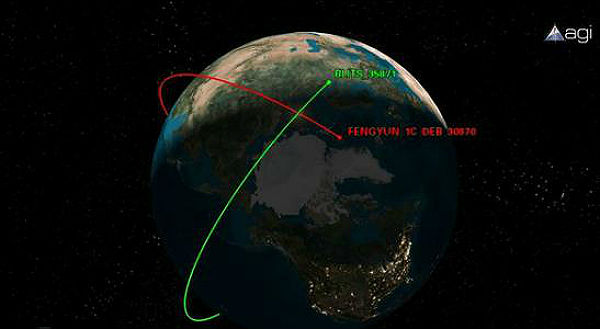 On February 4, 2013 Dr. Vasiliy Yurasov and Dr. Andrey Nazarenko, working with the Institute for Precision Instrument Engineering (IPIE) in Moscow, reported to CSSI a significant change in the orbit for their BLITS satellite. IPIE had detected a sudden decrease of 120 m in the semi-major axis of its orbit and a change in its spin velocity and attitude. Prior to the event, BLITS had a spin axis perpendicular to the orbit plane and had a stable spin period of 5.6 sec.

Drs. Yurasov and Nazarenko’s analysis, based on optical and photometric analysis (since they are no longer able to perform laser tracking), estimated that the change occurred on January 22, 2013 at approximately 07:57 UTC. They assume these changes might have been the result of a collision with another object in orbit. They were also able to determine a new spin period of 2.1 sec.

CSSI reviewed the SOCRATES archives to determine whether there were any close approaches around the reported time. Using the SOCRATES archive generated January 22, 2013 CSSI discovered that only one close approach occurred for BLITS – piece of  Chinese weather satellite FENGYUN 1C which was deliberately destroyed almost six years ago. The Joint Space Operations Center (JSpOC) released the first TLE for debris associated with BLITS (NORAD Catalog Number 39119) via the Space Track web site on 2013 March 3, further confirming CSSI’s analysis.

On January 11, 2007, the intentional destruction of the Chinese weather satellite Fengyun-1C as part of an anti-satellite missile test created a significant field of space debris. Two years later, a defunct Russian military satellite struck an operational American Iridium satellite over northern Siberia, blowing even more trash into space.
This video, below, shows the distribution of space debris created by the Chinese anti-satellite test in January 2007 over a time frame of more than 1 year.

Over 21,000 pieces of space trash larger than 10 centimeters and  half a million bits of junk between 1 cm and 10 cm are estimated to circle the planet. There are also millions of pieces of debris smaller than a 1 cm. In Low Earth-orbit, objects travel at 7 kilometers per hour (4mps). Any such object is capable of creating new pieces of potentially threatening debris if it collides with another object.

Satellite telecommunication and weather satellites orbit in geosynchronous Earth orbit, over 22,000 miles (36,000 km) high, and can remain aloft for millions of years.

The following video shows an SM-3 missile launched from the USS Lake Erie hitting a wayward satellite on February 20, 2008. 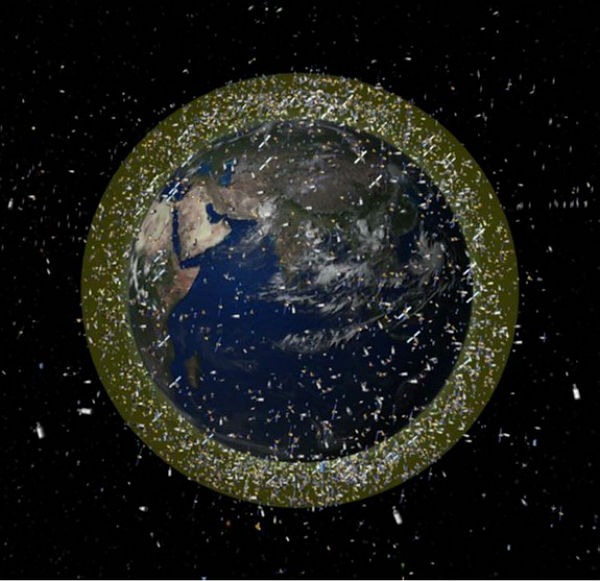 This computer illustration depicts the density of space junk around Earth in low-Earth orbit. (Credit: ESA) 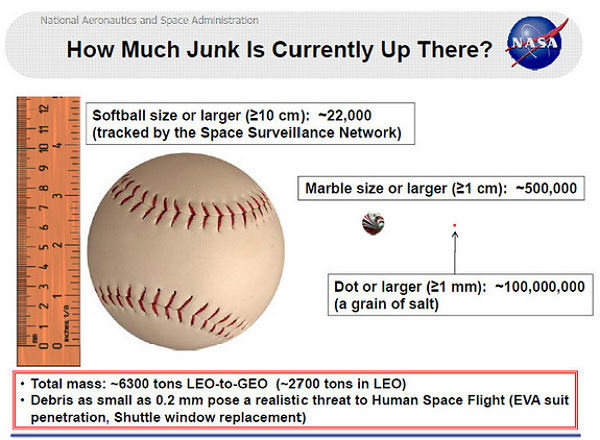 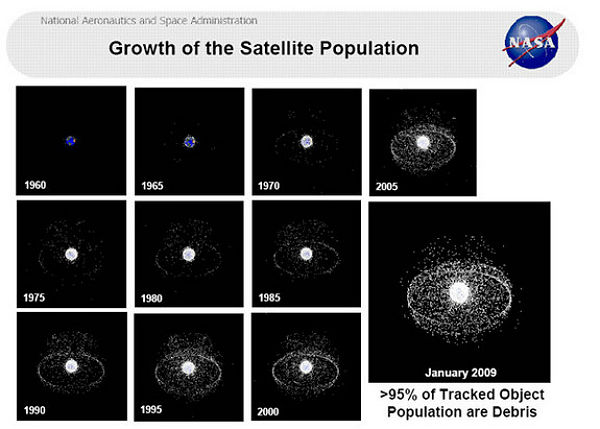 This NASA chart shows the historical growth of man-made space debris around Earth since 1960. (Credit: NASA)

NASA's Long Duration Exposure Facility spent 5.7 years in a low Earth orbit to help analyze the risk from debris. Over 20,000 impacts have been documented. More than 100 trillion artificial objects smaller than one-hundred-thousandth of an inch (1 micron) could circle the globe.