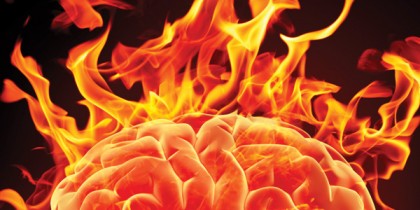 More disturbing evidences of vaccine-induced brain damage are emerging in the U.S. as primarily young women are increasingly developing a mysterious autoimmune condition known as anti-NMDA receptor encephalitis that exhibits symptoms similar to demonic possession. According to a recent report by CBS Philly, young women who develop the condition may act normally one minute, and the next minute develop extreme paranoia or an inability to control their limbs, which experts admit is a result of antibodies attacking the brain, causing swelling and inflammation.

Two young women from the New England area are cited in the story as having suffered from the condition in recent years, which resulted in both of them developing extreme and bizarre side effects such as uncontrollable seizures, drastic mood changes, paranoia, and an inability to function and communicate properly. And the one thing the two had in common was brain inflammation so severe that one prominent area doctor described it as the brain literally being “on fire.”

“One minute I’d be sobbing, crying hysterically, and the next minute I’d be laughing,” explained Susannah Cahalan of New Jersey to CBS Philly about her experience with anti-NMDA receptor encephalitis. “I had bizarre, abnormal movements (that would) leave my arms out extended, you know, in front of me. I was a relatively normal person, then the next minute I’m hallucinating and insisting that my father had kidnapped me.”

Cahalan’s experience was similar to that of Emily Gavigan, from Pennsylvania, who told reporters that she, too, suffered from extreme side effects as a result of the condition. Gavigan’s parents watched their previously healthy daughter gradually slip away from them. Like other young girls with the condition, Gavigan was initially thought to have a psychological disorder, but was later properly diagnosed as having anti-NMDA receptor encephalitis, a definitively neurological condition that most definitely has an external cause.

“I was very paranoid and manic,” explained Gavigan. “There was something wrong. I thought trucks were following me.”

Evidence points to vaccines, lack of proper nutrients as cause of Anti-NMDA Receptor Encephalitis

The mainstream media, of course, continually refers to anti-NMDA receptor encephalitis as a “mysterious” condition with no known cause or cure. But further investigation into the inflammatory disease exposes vaccines as a likely cause of the condition which, as it turns out, can even occur in young boys.

In a review on Anti-NMDA Receptor Encephalitis, Teresa Conrick from AgeOfAutism.com explains how a 2010 study published in the Journal of Neurology identified a link between the condition and vaccines. Not surprisingly, symptoms of anti-NMDA receptor encephalitis were observed to appear not long after children received routine vaccinations and booster shots, suggesting a likely connection.

“We report about a 15-year-old female patient who was diagnosed with anti-NMDA receptor encephalitis after receiving a booster vaccination against tetanus / diphtheria / pertussis and polio (TdaP-IPV),” wrote the authors of the study in a letter to the editors.

Another potential cause of anti-NMDA receptor encephalitis is nutrient deficiency, which is widespread throughout America today. Encephalopathies in general have been linked in numerous studies to nutritional deficiencies, particularly a lack of B vitamins and trace minerals.