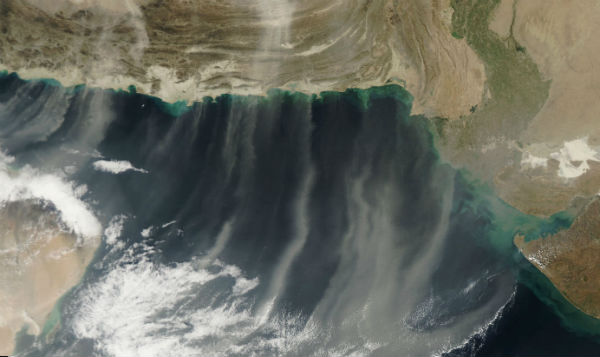 Research has shown that dust storms are increasing  in the Sahara Desert and that in parts of North Africa, annual dust production has increased tenfold in the last 50 years. Since dust storms transport large amounts of material for long distances, their increasing frequency could have serious consequences for the environment. Scientists say the deposition of dust could affect climate change, disease transmission and air pollution. One concern is that as dust deposits increase, levels of carbon dioxide in the atmosphere could change, directly affecting temperatures and rainfall.

Last week we saw sand from Saudi Arabia’s Rub al Khali Desert blew over the southern end of the Red Sea, across the Farasan Islands and towards Eritrea, plumes of dust storm over Ethiopia and Sudan, dust storm near Lake Chad, dust storm south of Aïr Mountains in Niger, haze over Eastern China and mouth of Yangtze River, smoke from agricultural fires in northern India as well as dust over the Indus River Valley in Pakistan and southwestward off Cape Monze near Karachi, and over the Arabian Sea, dust over Afghanistan and Iran.

Levels of dust and smoke in our atmosphere increased in the first day of January 2013. Bellow you can see where the majority of dust plumes were located.

A dust storm that has been blowing off the coast of Iran and Pakistan sends dust and sand particles over the mouth of the Indus River and over the Arabian Sea. Over land, the dust hangs in the air by the Pakistan-India border, partially veiling the Rann of Kutch wetlands and the Gulf of Kutch to their south. The gulf of Khambhat remained unaffected by the dust. 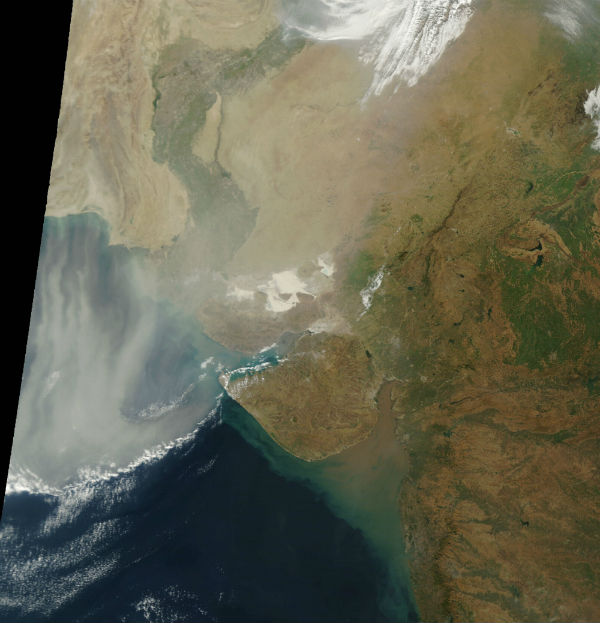 Dust from the Sahara Desert can be seen in the air near the border between Nigeria and Cameroon, over Benue River, the major tributary of the Niger River. 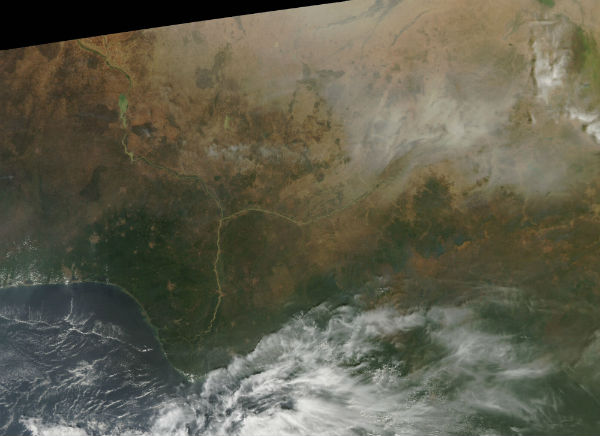 Smoke Over Bay of Bengal, India

Smoke blows over northeastern India, near the border with Bangladesh, and over the Sundarbans mangrove forest and the mouths of the Ganges River. The smoke is thickest in the lower left quadrant, while distinctive streaks caused by air currents can be seen in the air near the river mouths over the Bay of Bengal. 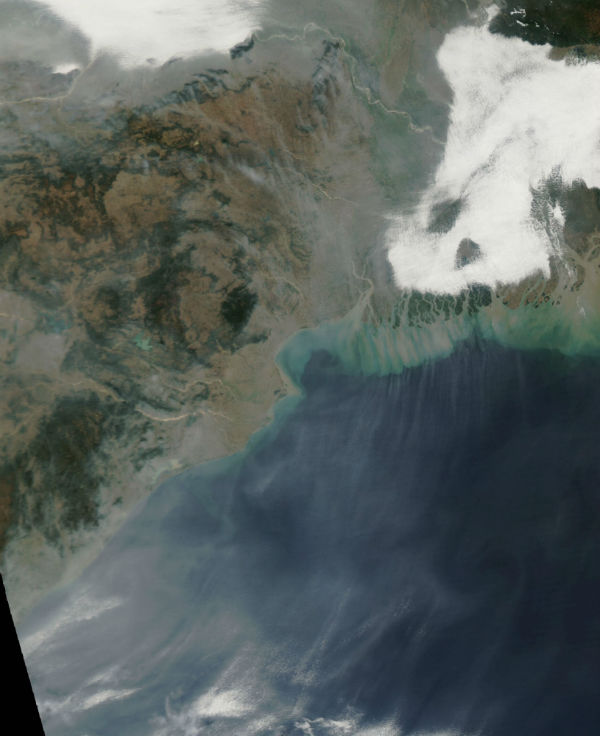 Dust blows off the coast of Western Sahara and to the northwest, towards the Canary Islands. Although thick plumes have not reached the islands, one can be seen just south of Fuerteventura (right edge). The archipelago is usually affected by large dust storms several times per yer that may last up to a week. 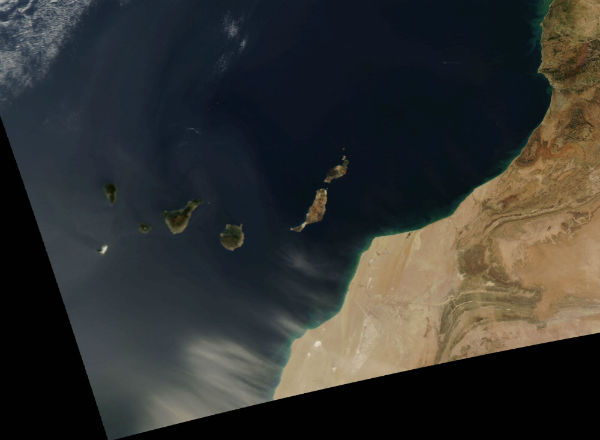 Dust blows off the coast of Western Sahara and over the Atlantic Ocean. 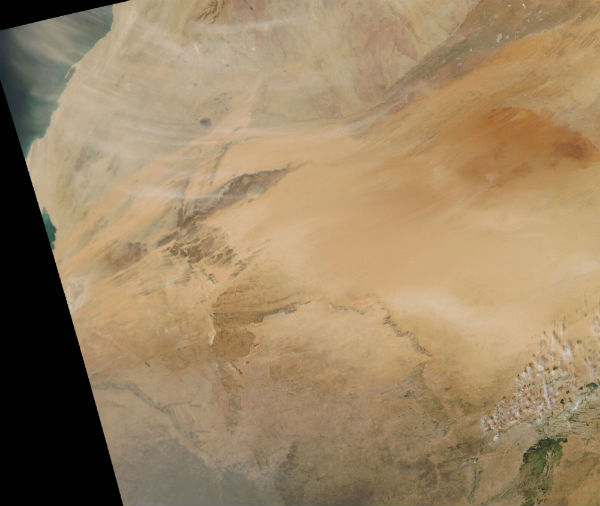 Rows of dust over Gulf of Oman

Dust blows off the coast of Iran in long, parallel rows, across the Gulf  of Oman, to the Arabian Peninsula. 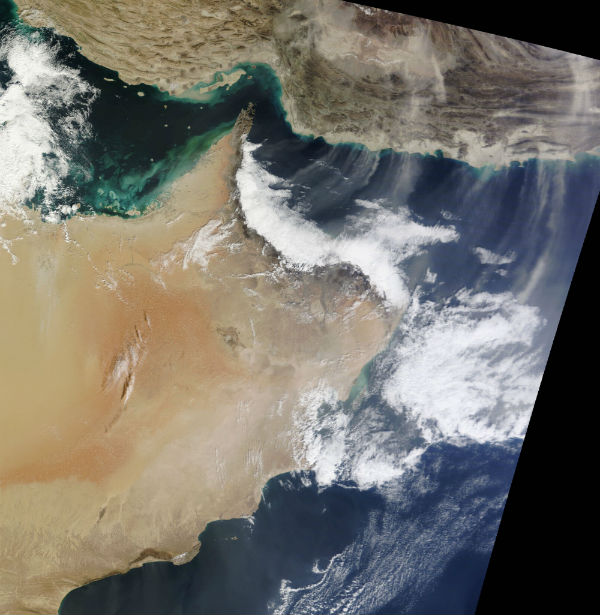 The dust remained east of the Strait of Hormuz; to the west, sediments can be seen in the Persian Gulf lining the coast of the United Arab Emirates and west of the island of Qeshm. (Credit: LANCE/MODIS/EarthSnapshots)

Featured image: Dust blows over Afghanistan (top center) and off the coasts of Iran and Pakistan. Air currents cause it to form long, parallel rows rather than an indistinct cloud. The dust reaches far over the Arabian Sea, where it is then swept westwards towards the Arabian Peninsula. (Credit: LANCE/MODIS)