A weather system in the Arabian Sea is forecast to intensify into a tropical cyclone — Nisarga — on June 2, 2020, turning severe into June 3, according to the India Meteorological Department (IMD). This will be the first tropical cyclone to form and make landfall near Mumbai or along the coast of Maharashtra during the month of June since 1891.

On Sunday, March 31, some parts of the state were already soaked by rains and thunderstorms, including Pune.

Light rains with thunder were reported in portions of the Mumbai Metropolitan Region since early Monday, June 1.

According to IMD's forecast track, the system is predicted to develop into a cyclonic storm on Tuesday, June 2, with maximum sustained winds between 60 to 70 km/h (37 to 43 mph) and gusts to 80 km/h (50 mph).

It is very likely to move north-northeastwards and pass by north Maharashtra and south Gujarat coasts between Harihareshwar and Daman between 07:00 to 12:00 UTC on Wednesday, June 3, when it will become a severe tropical cyclone with winds between 105 to 115 km/h (65 to 71 mph) and gusts to 125 km/h (78 mph). 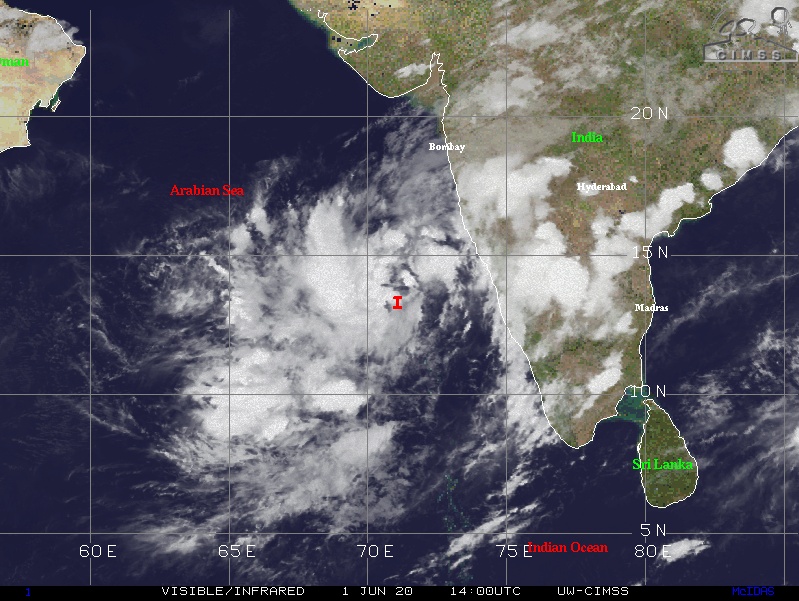 Nisarga is forecast to make landfall Wednesday evening over Palghar district, 100 km (62 miles) north of Mumbai. The IMD has issued a yellow warning ordering district administrations across a 370 km (230 miles) area between Harihareshwar in Raigad, Maharashtra, to the Union Territory of Daman, which is closer to south Gujarat, to be on high alert.

"Stronger than usual winds and rain are expected at the coast of Maharashtra on June 2 evening and in the first half of June 3. As the warning period will be shorter, disaster preparedness in coastal areas is immediately advisable," Akshay Deoaras stated, a meteorologist at the University of Reading in the UK.

Weather agency Skymet also warned of rough sea conditions between June 2 and 5, with waves forecast to be around 4 to 5 m (12 to 16 feet) high. Residents are advised to take extra precautions on Karnataka, Maharasthra, and Gujarat.

"Palghar, Thane, Mumbai, and Raigad districts are likely to be the most affected by this severe cyclonic storm. We’re expecting damages in the form of the uprooting of trees and the collapse of kutcha and pucca buildings," aid IMD director-general Mrutyunjay Mohapatra.

"A more detailed list of likely damages will be shared soon. State governments are being updated constantly, as the weather system develops."

This will be the first time since 1891 that a weather system has strengthened into a cyclone and made landfall near Mumbai or Maharashtra during the month of June.

"Only two depressions, in 1948 and 1980, have come close but never turned into a tropical cyclone during June, indicate records," said Deoaras.