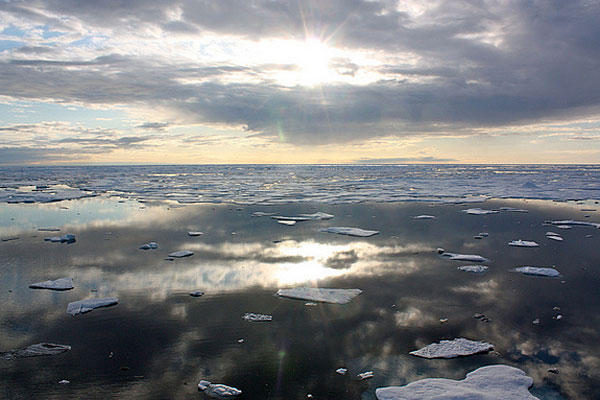 Arctic has been experiencing a shift in the general patterns of high and low pressures recently, as well as the direction and speed of the winds. These changes may explain some of the dramatic sea ice loss experienced in the Arctic regions. Wind speed and direction are driven by differences in atmospheric pressure. Generally, air moves from areas of high to low pressure – the greater the pressure difference between two areas, the faster the air moves.

According to a new NOAA-led study published on October 10,2012 in Geophysical Research Letters, changes in summer Arctic wind patterns contribute not only to an unprecedented loss of Arctic sea ice, but could also bring  shifts in North American and European weather. As Arctic warms at twice the global rate, scientists expect more extreme weather events like heatwaves, floodings or heavy snowfall across the temperate latitudes of the northern hemisphere, where billions of people live. 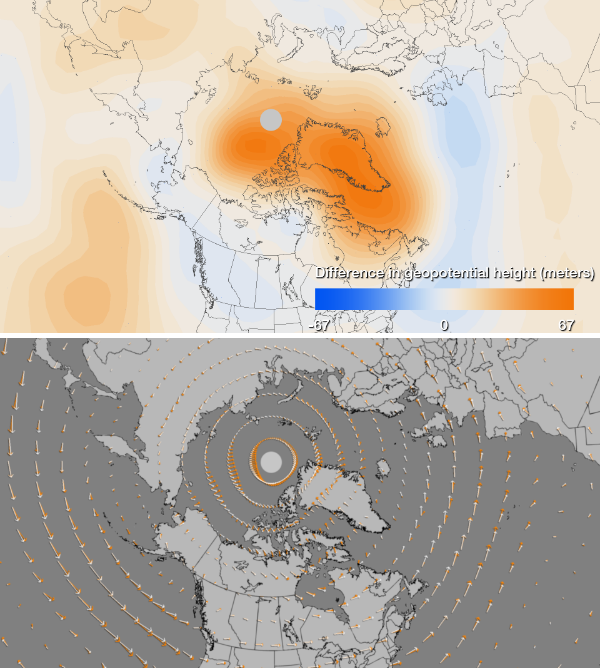 A research team led by a NOAA research oceanographer James Overland, Ph.D., of NOAA’s Pacific Marine Environmental Laboratory in Seattle, Washington, uncovered a change in the summer Arctic wind pattern over the past six years. They point that this shift demonstrates a physical connection between reduced Arctic sea ice in the summer, loss of Greenland ice, and potentially, weather in North American and Europe.

The team examined the wind patterns in the subarctic in the early summer between 2007 and 2012 as compared to the average for 1981 to 2010. The new study show that the previously normal west-to-east flowing upper-level winds have been replaced by a north-south undulating wave-like pattern. This new wind pattern transports warmer air into the Arctic and pushes Arctic air farther south. This may influence persistent weather conditions in the mid-latitudes. Higher pressure over the North American continent and Greenland is driving these changes in the early summer wind patterns.

Warmer air and sea temperatures caused by global warming are rapidly changing Arctic environment but this new shift provides additional evidence that changes in the Arctic are also part of an “Arctic amplification” through which multiple specific physical processes interact to accelerate temperature change, ice variability, and ecological impacts. The effects of Arctic amplification will increase as more summer ice retreats over coming decades. Enhanced warming of the Arctic affects the jet stream by slowing its west-to-east winds and by promoting larger north-south meanders in the flow. 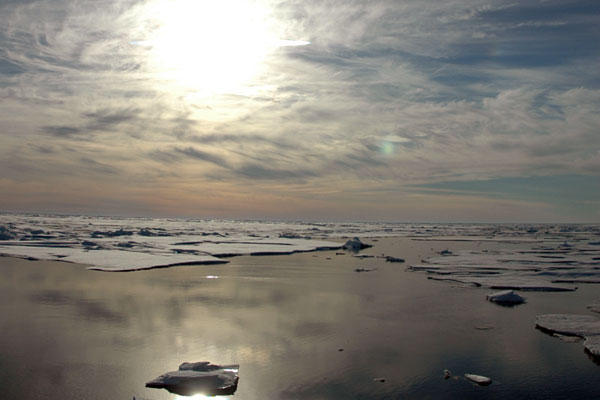 Since 2007, the summer winds were found to blow through the Bering Strait, across the North Pole, more consistently from the south, out toward the Atlantic Ocean. These winds transfer additional heat from the south toward the North Pole and push sea ice across the Arctic and out into the Atlantic Ocean, contributing to record losses of summer sea ice. The 2012 Arctic summer sea ice minimum is the lowest on record.

The study, entitled “The Recent Shift in Early Summer Arctic Atmospheric Circulation,” was co-authored by scientists from Rutgers University in New Jersey,  the University of Sheffield in the United Kingdom, and the Joint Institute for the Study of the Atmosphere and Ocean, a partnership of NOAA and the University of Washington. It can be found online.