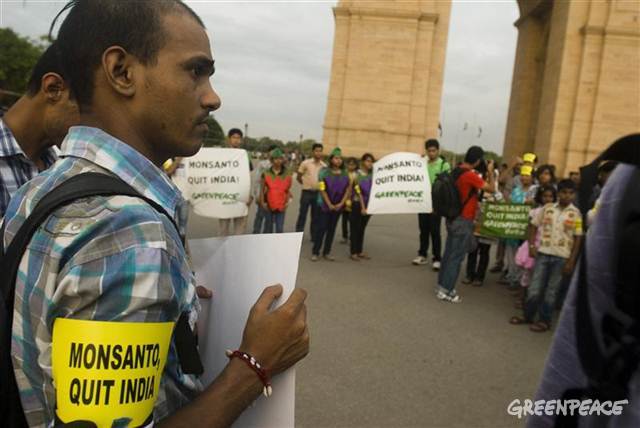 India, the world’s second-most populous country and one of its poorest, has apparently had enough of agribusiness giant Monsanto.

According to a recent story in Science magazine:

Sounding what some regard as the death knell for the development of genetically modified food crops in India, a high-profile parliamentary panel last week recommended that GM crop “field trials under any garb should be discontinued forthwith,” and that agricultural GM research should “only be done under strict containment.” If implemented, the report’s recommendations would paralyze research and erode India’s food security, warns India’s chief of crop research.

Even more damning is this: Following the release of the report, the panel’s chair, Basudeb Acharia, said in no uncertain terms: “India should not go in for GM food crops.”

According to the author of the piece, Pallava Bagla, the panel’s recommendation has been looked upon by some “as the death knell of the development of genetically modified food crops in India,” a development that, despite the country’s burgeoning population, would nonetheless be a sound policy decision, given what we know about the ill effects of GM foods.

Consider that, from a public policy perspective, it’s fair to ponder just how much India will save in healthcare costs alone for its citizens – health expenditures that would have been caused by GM foods but that would never materialize if the country abandons such foods altogether.

As you might have guessed, not everyone is pleased, or agrees with, the panel’s recommendation. Swapan Dutta, a rice geneticist and deputy director of the Indian Council of Agricultural Research, suggested that if the panel’s recommendation is implemented, it would paralyze research and threaten the country’s food security. He added that “hope for GM research in India is lost.”

But this development is not a new one to those who have been following India’s souring relationship with Monsanto over the past few years.

“The Indian government has been sending mixed signals about its commitment to agricultural GM technology,” writes Sayer Ji, founder of the scientific health food website GreenMedInfo.com.

For example, Indian Prime Minister Manmohan Singh has voiced his support recently for GM crops, telling Science magazine, “In due course of time we must make use of genetic engineering technologies to increase the productivity of our agriculture.”

Also, in 2002, the government approved Bt-toxin carrying cotton as the first GM commercial crop in India, a decision that has led to more than 1,100 varieties of GM cotton in the country now, accounting for some 93 percent of total cotton production.

“But,” Ji points out, “Singh’s own ministers are not towing the party line.” He says the Science article notes that “in 2010, former environment minister Jairam Ramesh imposed a moratorium on the commercialization of Bt brinjal, a traditional Indian eggplant, even after the ministry’s scientific advisory panel had given the GM variety approval.”

History of grief between India and Monsanto

The article further points out in its June issue that environmental minister Jayanthi Natarajan was quoted as saying, “Genetically modified foods have no place in ensuring India’s food security.”

Indian officials generally admit that utilizing GM foods has managed to allow the country to produce much higher yields of economically important crops, such as cotton. But, they argue, perhaps the biggest driver of the panel’s decision is Monsanto’s trademarking of its seeds; controlling the seeds, they believe, is compromising India’s food safety and security.

The panel’s recommendation is just the latest snafu between India and Monsanto.

A year ago, India sued the agribusiness giant for “biopiracy,” accusing the company of stealing India’s indigenous plants in order to re-engineer them into patented varieties.

Indian officials complained then that Monsanto and other agri-giants were attempting to exploit the country’s crops for their own personal gain.