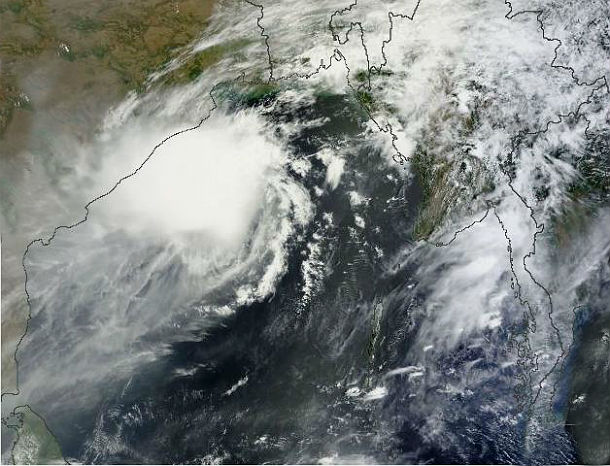 Tropical Cyclone Mahasen (01B) is now centered several hundred miles south of Kolkata, India, and will impact areas from northeastern India to Bangladesh and Myanmar over the next few days. The system is about to enter  into an area of warm sea surface temperatures and lower wind shear which will intensified the cyclone and give it opportunity to become even better organized. Landfall is expected to occur on May 16, 2013 with most forecast models putting the path between Chittagong (Bangladesh) and Maungdaw (Myanmar). 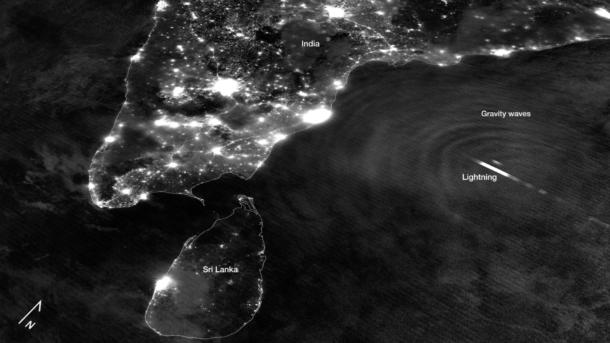 On May 13, 2013 the Suomi NPP satellite caught an interesting glimpse of the storm as it moved off the eastern coast of India. The VIIRS Day-Night Band was able to resolve lightning flashes towards the center of the storm, along with mesopheric gravity waves emanating outwards like ripples in a pond. These gravity waves are of particular interest to air traffic controllers so assist in identifying areas of turbulence. (Credit: NOAA/NASA/VIIRS)

TC Mahasen will bring life-threatening conditions to millions of people from northeastern India and into Bangladesh and Myanmar. Due the low elevations of this region (mostly shallower than 200 meters), flooding, mudslides and storm surge present the greatest threats. These areas have been hit by some of the deadliest cyclones across the globe. 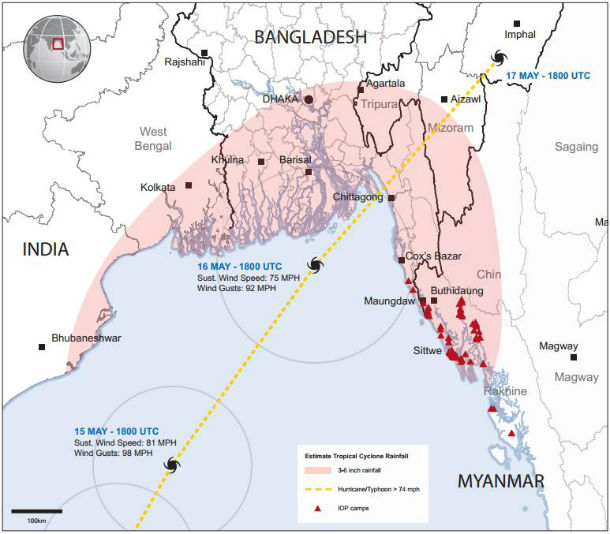 The highest impact, surge and rainfall predictions are for the Chittagong and Cox’s Bazaar areas of Bangladesh but there are serious concerns for Rakhine State where there are more than 140,000 IDPs. (Credit: OCHA/ReliefWeb)

Torrential rains caused floods and landslides across Sri Lanka, which are responsible for seven reported deaths. Several overcrowded boats carrying hundreds of evacuees capsized off the coast of western Myanmar after the lead boat crashed into rocks and more than 50 people are feared dead. Myanmar state television reported Monday that 5,158 people were relocated from low-lying camps in Rakhine state to safer shelters. But far more people are considered vulnerable. 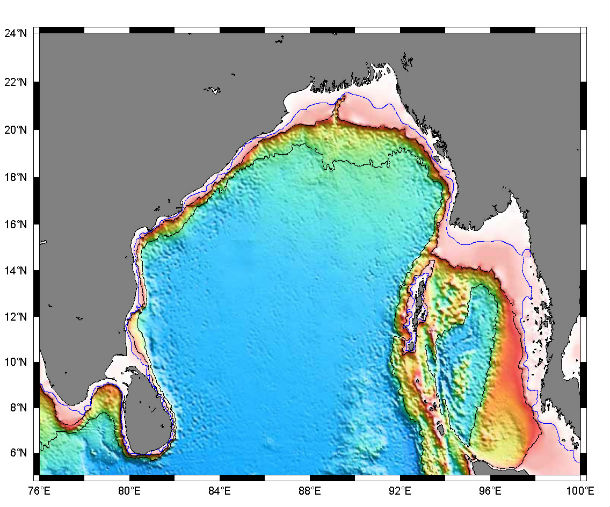 Bathymetry of the Bay of Bengal (Credit: Geomap/MGDS) 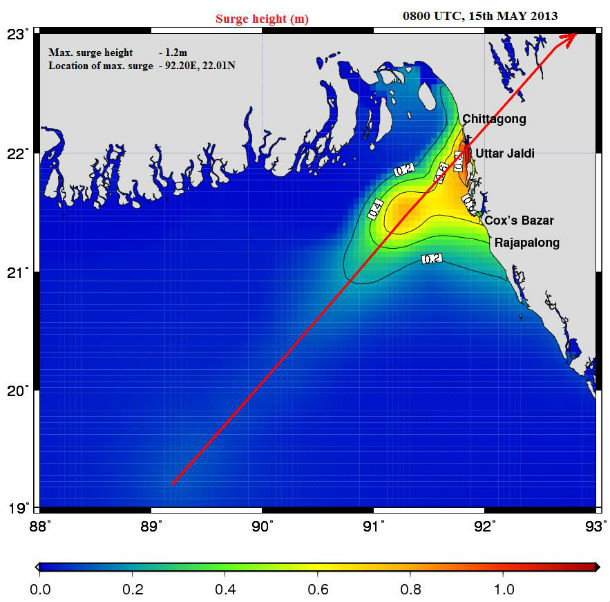 According to latest report by Joint Typhoon Warning Center (JTWC), TC Mahasen is located approximately 246 nm southward of Calcutta, India. The system is moving north-northeastward at speed of 12 knots. Upper level analysis indicates an anticyclone to the east of the system continues to move into better vertical alignment with the low level circulation center, leading to a decrease in vertical wind shear to low levels (10 knots).

The storm is forecast to track northeastward along the poleward oriented subtropical ridge until westerly flow advects the system overland. Dissipation is expected to begin upon making landfall after the next 24 hours and will be fully dissipated after 36 hours. 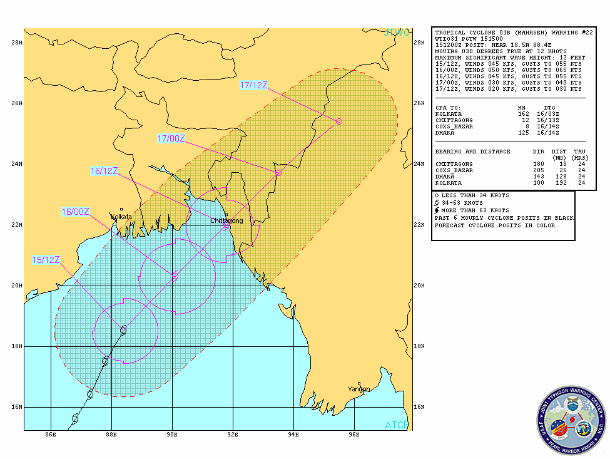 Myanmar's Meteorology and Hidrology Department reports that cyclone is moving towards between Bangladesh and Northern Rakhine coasts. Isolated heavy rainfalls are likely in Sagaing, Mandalay, Magway, Bago, Yangon and Ayeyarwady Regions, Kachin, Chin and Rakhine states. Frequent squalls with rough seas will be experienced Deltaic, Gulf of Mottama, off and along Rakhine coasts. 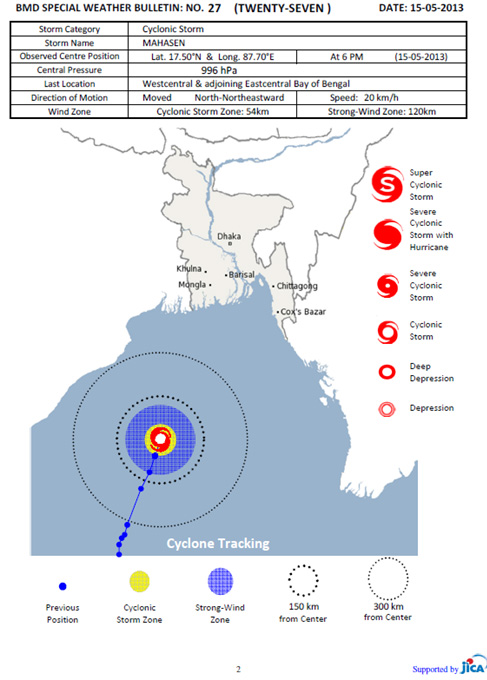 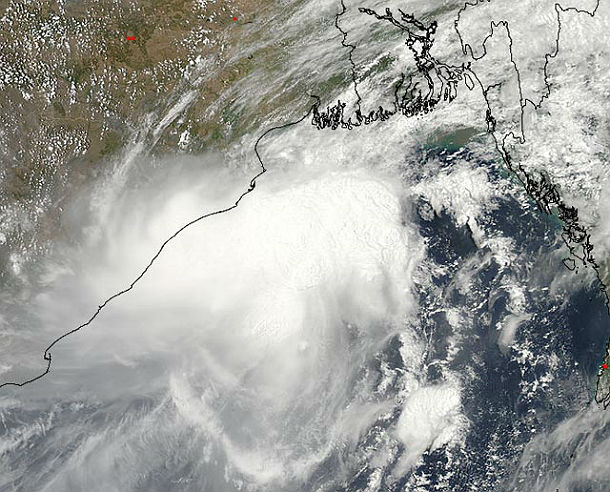 Tropical Cyclone Mahasen captured by MODIS satellite at 07:45 UTC on May 15, 2013. The storm appears disorganized due to wind shear keeping the heavy thunderstorms to the west of the center. (NASA image courtesy Jeff Schmaltz, LANCE/EOSDIS MODIS Rapid Response Team at NASA GSFC) 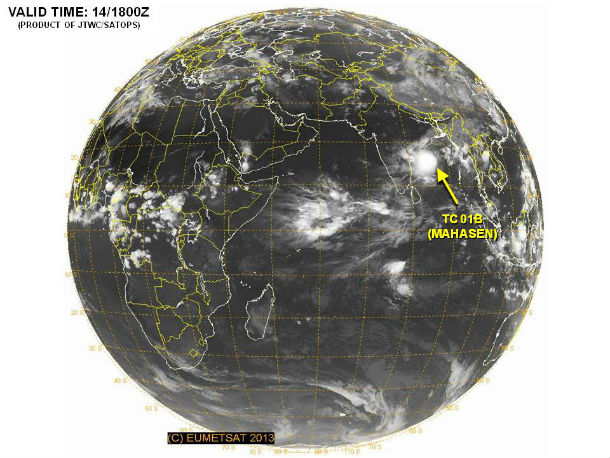