Scientist claim that true polar wander is happening now. True polar wander is a solid-body rotation of a planet with respect to its spin axis, causing the geographic locations of the North and South Poles to change, or "wander". Cases of true polar wander have occurred several times in the course of the Earth's history. The speed of rotation is limited to about 1° per million years. If an object of sufficient weight on Earth formed far from Earth’s equator, the force of Earth’s rotation would gradually pull the object away from the axis around which Earth spins, creating an imbalance.

Scientists at Princeton explain that if the volcanoes, land and other masses that exist within the spinning Earth ever became sufficiently imbalanced, the planet would tilt and rotate itself until this extra weight was relocated to a point along the equator. True polar wander would cause a movement of Earth’s land masses, but  in order to correct an imbalance of weight with respect to Earth’s spin. 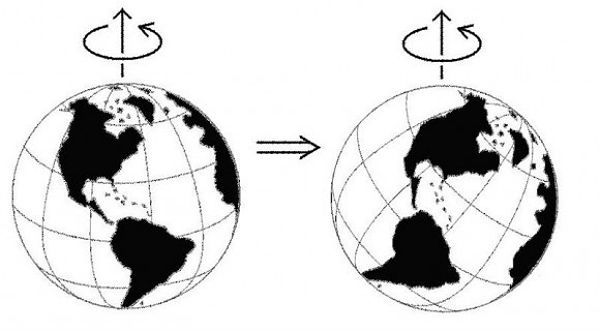 Polar wander should not be confused with precession or nutation, which is where the axis of rotation moves caused by the gravitational attraction of the Moon and Sun, and occurs all the time and at a much faster rate than polar wander. And, it does not result in changes of latitude. Sometimes referred to as 'precession of the equinoxes', 'lunisolar precession', or 'precession of the equator' - identify the rotation of the Earth's axis which shifts between a tilt of 22.1° and 24.5° and back again, taking approximately 41,000 years to complete a full rotation. Currently, the Earth's tilt is at 23.44° which is roughly halfway between its extreme values.

True polar wander is not a geomagnetic reversal, which is repeating pattern reversal of the magnetic field of the Earth. It is estimated that Earth's magnetic field reverses every few thousand years at low latitudes and every 10,000 years at high latitudes. It is believed we are far enough along the cycle that many living today will witness the bouncing back and forth of magnetic north and it swings reaching latitudes below 30°.

The Earth’s magnetic field is not stable - it changes in magnitude, direction, and polarity through time. Currently the magnetic poles are only about 12 degrees off from the true poles of the Earth. However, 500 million years ago, the magnetic poles were much further away. Since then they have migrated to their current position in a long sweeping arc. This movement is relative to the Earth’s axis of spin and is caused by changes in the convection of the Earth’s mantle. 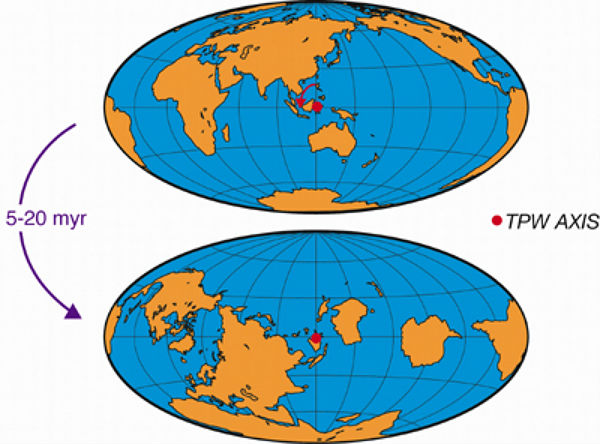 In 1971, geophysicist W. Jason Morgan proposed the hypothesis of mantle plumes. In this hypothesis, convection in the mantle transports heat from the core to the Earth's surface in thermal diapirs. In this concept, two largely independent convective processes occur in the mantle: the broad convective flow associated with plate tectonics, which is driven primarily by the sinking of cold plates of lithosphere back into the mantle asthenosphere, and mantle plumes, which carry heat upward in narrow, rising columns, driven by heat exchange across the core-mantle boundary. The latter type of convection is postulated to be independent of plate motions. 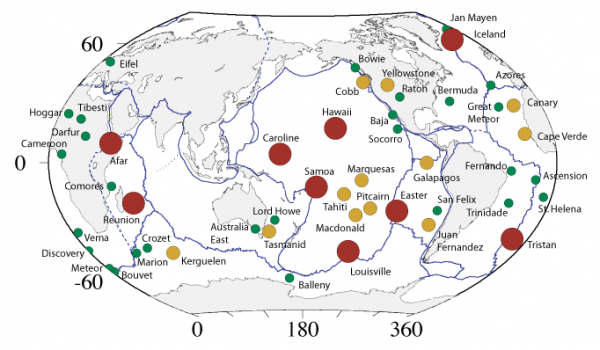 According to plate tectonics theory, the Earth's surface is broken into a number of shifting slabs  or plates (which average about 80 km in thickness) that move relative to one another above a hotter, deeper, more mobile zone (at average rates about 12 cm per year). Most of the world's active volcanoes are located along or near the boundaries between shifting plates (plate-boundary volcanoes) but some active volcanoes are not associated with plate boundaries (intra-plate volcanoes). They form roughly linear chains in the interior of some oceanic plates. The peripheral areas of the Pacific Ocean Basin, containing the boundaries of several plates, are dotted by many active volcanoes that form the so-called "Ring of Fire."

Scientists need a stable frame of reference to which observations of relative motion might be compared to if they want to know when, in which direction and at what rate the Earth’s solid exterior might be rotating due to true polar wander. Volcanic hotspots may answered those questions. 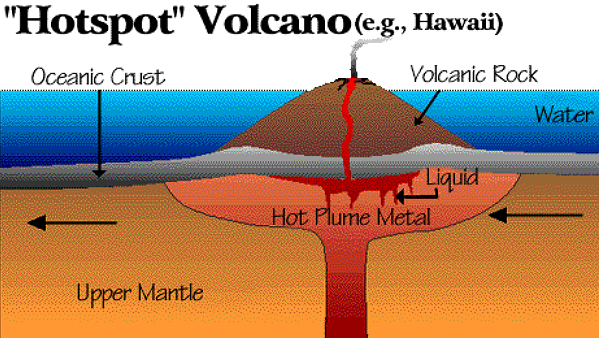 Hotspot is a point on the earth's crust that sits above a convection cell in the mantle.  The hotspot remains in one place and the plates above the hotspots are drifting (at a rate of approximately five inches per year).  When the plate moves enough, the channels of magma connecting the plume to the volcano break and the volcano becomes extinct and allows for the process to begin again and again forming a chain of volcanoes. Trails of these extinct volcanoes help scientists to monitor the movement of the plates. Active hotspot volcanoes also show us changes in the direction of Earth’s magnetic poles from series of eruptions with alternating magnetic orientation.

More than a hundred hotspots beneath the Earth's crust have been active during the past 10 million years. Most of these are located under plate interiors and other occur near diverging plate boundaries. Some are concentrated near the mid-oceanic ridge system, such as beneath Iceland, the Azores, and the Galapagos Islands. It is estimated that hotspot volcanism will affect every part of the earth's surface on an average of every 500 million to 800 million years.

Group of scientists from Germany and Norway used hotspots in Earth’s mantle as part of a computer model to identify four possible instances of true polar wander in the past. Pavel V. Doubrovine and Trond H. Torsvik of the University of Oslo, and Bernhard Steinberger of the Helmholtz Center in Potsdam, Germany, with other colleagues published their results in the Journal of Geophysical Research on October 1, 2012.

The solid Earth traveled back and forth twice by nearly 9 degrees with respect to our planet’s axis of rotation - from 90 to 40 million years ago.  And the Earth’s solid outer layers have been slowly rotating at a rate of 0.2 degrees every million years for the past 40 million years. 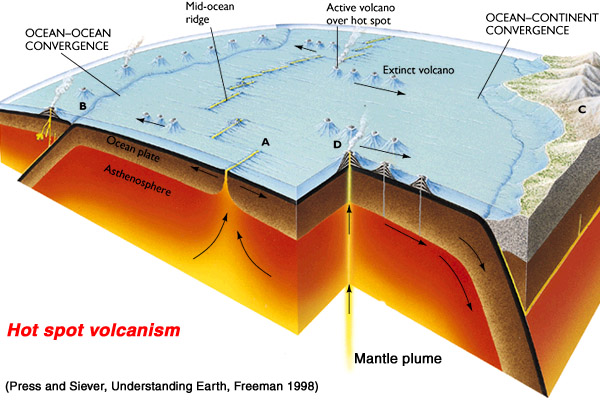 Featured image: Northeast end of the actively spreading fissure between Pu`u `Ō `ō and Napau craters on March 5. Lava is just breaking the surface in the foreground crack. (Credit: HVO/USGS)

Absolute plate motions in a reference frame defined by moving hot spots in the Pacific, Atlantic and Indian oceans

Plates vs Plumes: A Geological Controversy

About hotspots and mantle plumes

Surigae rapidly intensifies into the first Super Typhoon of 2021

Typhoon "Surigae" rapidly intensified on April 16 and 17, 2021, into the first Super Typhoon of the year. Surigae -- known in the Philippines as Bising -- is expected to become a powerful Category 5 typhoon over the next 12 hours, without making landfall...

La Soufrière volcano on the Caribbean island of Saint Vincent began erupting on April 9, 2021, spewing ash at least 7.6 km (25 000 feet) above sea level. The volcano continued to erupt over the next several days, with multiple violent explosions, allowing...

Elevated seismicity and deformation at the summit of Mauna Loa volcano, Hawaii

While the largest volcano on Earth -- Mauna Loa is not erupting, rates of deformation and seismicity at the summit remain slightly elevated and above long-term background levels. Other Mauna Loa monitoring data streams show no significant change in deformation rates...