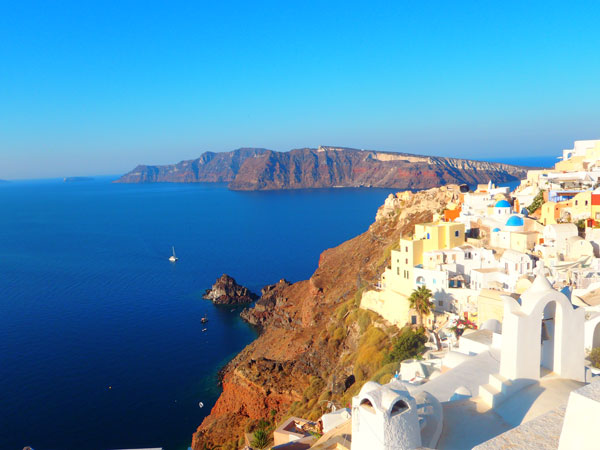 Scientists have discovered that the Greek Santorini island group has been inflating, slowly rising and moving outward, around a point just north of the Kameni islands. Despite being dormant for over half a century, satellites have detected slight movements. Satellite data confirm that the islands have risen as much as 14 cm since January 2011. The scientists used radar data from ESA’s Envisat satellite from March to December 2011 and from the German TerraSAR-X mission from July 2011 to April 2012 to map the underground movement. They also used GPS receivers and an island-wide network of triangulation stations to ensure accurate measurement. New study points that the total amount of vertical movement is now approaching 8–14 cm at some points on the Kameni islands, and the whole caldera is around 14 cm wider now than it was at the beginning of 2011.

During the first months of this year, Santorini saw a drop in the speed of deformation, accompanied by a reduction in seismic activity. According to Prof. Kosmas Stylianidis, Head of the Special Scientific Committee for the Monitoring of Santorini Volcano, the volcano presents a very limited activity during the last months, much lower than that of 2011. 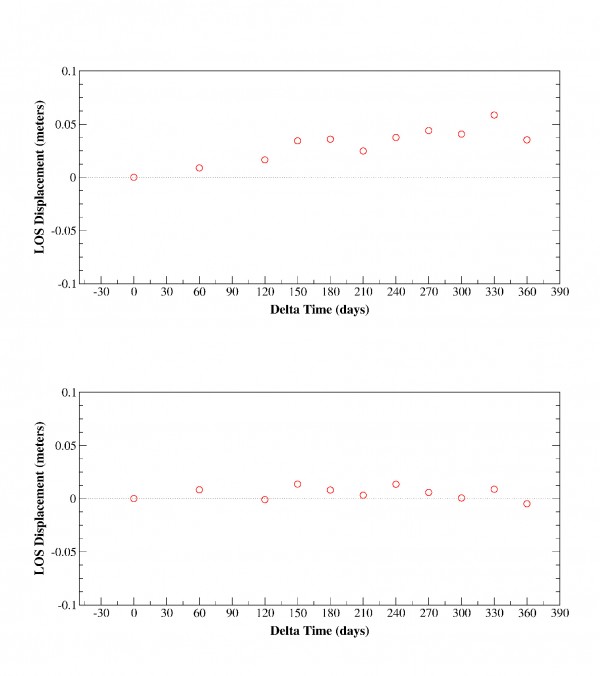 January 2011 started with a series of small earthquakes beneath the islands, mostly to weak to be felt by the local residents. By the April 2011 residents start to feel weak ground shaking. The scientific team believes that molten rock has accumulated in a magma chamber at a depth of about 4 km. This chamber increased by 10–20 million cubic metres (8–15 times the size of London’s Olympic Stadium) from January 2011 to April 2012. As it grew, Earth’s surface deformed in response. But the satellite data show that the amount of molten rock that has arrived beneath Santorini over the 12-month period is the equivalent of 10–20 years’ growth of the volcano.

Satellite Radar Interferometry (InSAR) and Global Positioning System (GPS) measurements of surface deformation at Santorini show that 10–20 million m3 of magma have been intruded beneath the volcano since January 2011. This volume is equivalent to 10–50% of the volumes of recorded dome-forming eruptions. 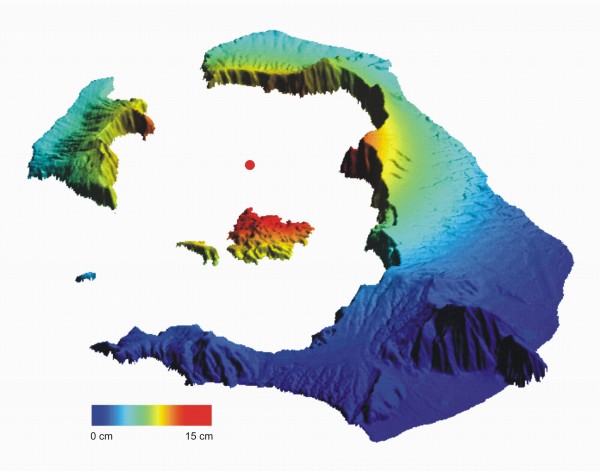 The changes in the GPS  and the uplift on the radar images show that molten rock was being injected at such a shallow level beneath the volcano. However, scientists stressed that the recent movement doesn’t indicate that an eruption is about to happen. In fact, the rate of earthquake activity has dropped off in the past few months. Similar results of ground deformation on the islands have been observed by a Greek team from the Harokopio University of Athens using the same type of satellite data. Another US–Greek team also had similar observations while using ground-based GPS instruments. 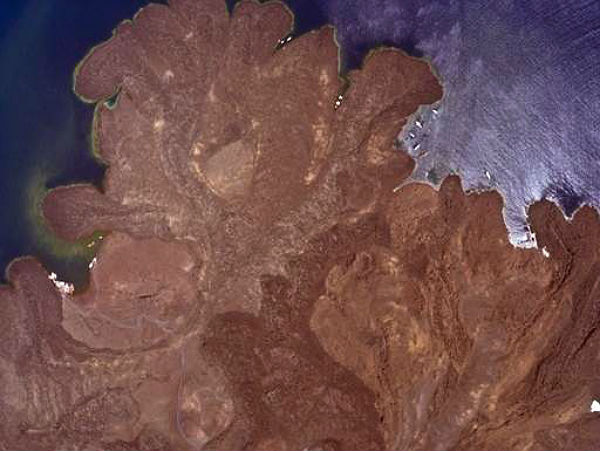 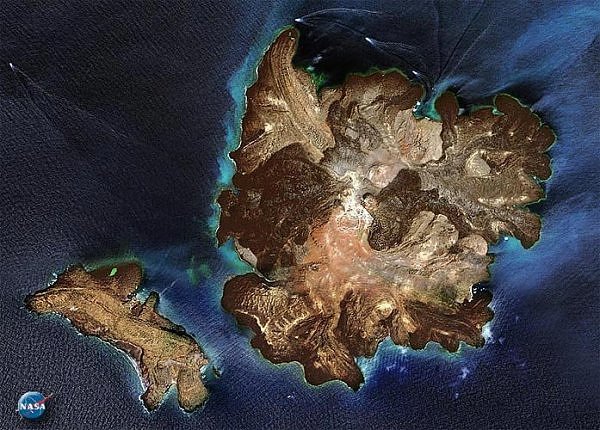 Although at present dormant, Santorini has been active several times in historic time. During the past time span elapsed since its last major explosive eruption (in about 1640 BC) numerous minor and medium-sized, mainly effusive eruptions have built the dark-colored lava shields of Nea and Palea Kameni inside the caldera. Their first appearance was witnessed and reported by Greek and Roman writers. The last eruption occurred in 1950. At present, only fumarolic activity, mainly inside the recently active craters, which are easily visited on a daily basis by hundreds of tourists during the summer season from May to October. 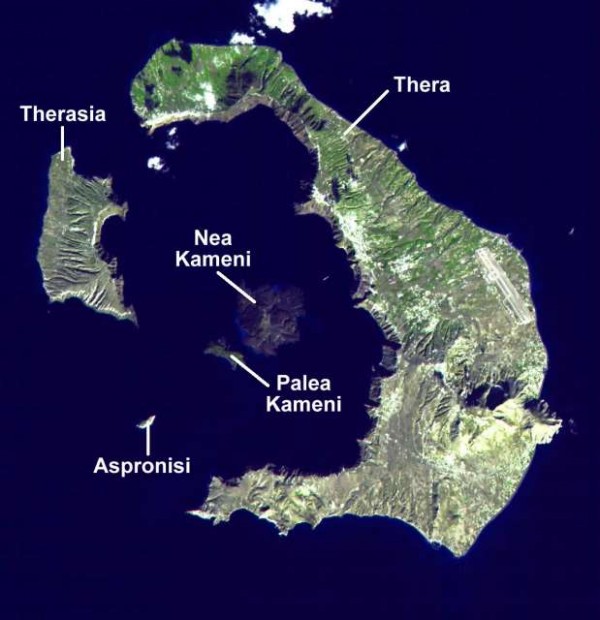 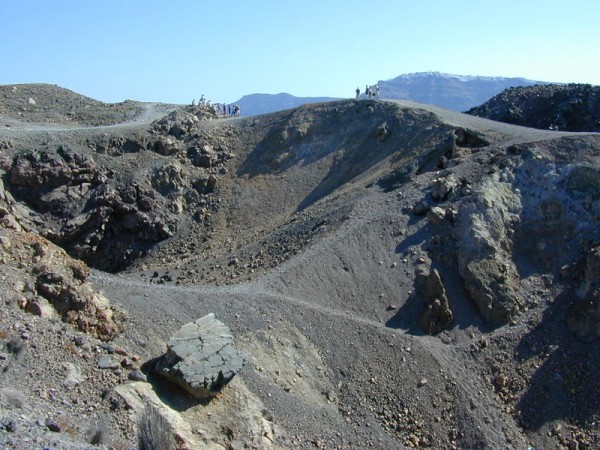 The Santorini volcano’s last major explosive eruption 3600 years ago formed a large caldera, which is now flooded by the sea. The Kameni islands, which lie in the middle of Santorini’s large flooded crater, form the top of this youngest part of the volcano. The last eruption of the Kameni islands was in 1950 and the next 60 years, Santorini was mostly quiet. Santorini has shown different behaviour patterns for the past 2000 years. However, small eruptions of lava every few tens or hundreds of years were slowly building a new volcanic edifice from the sea floor. 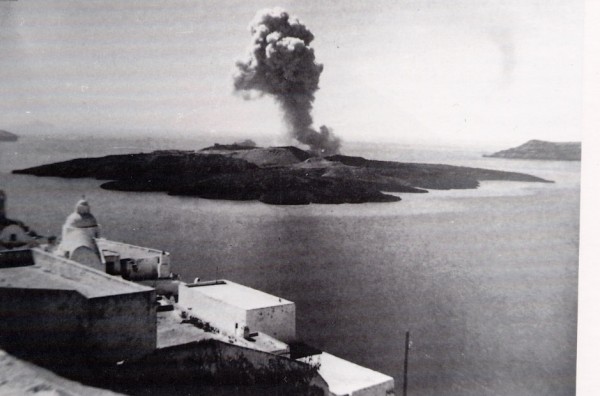 Volcanism in the area of Santorini (it was then only a small, non-volcanic island) started about 2 million years ago with the extrusion of dacitic lavas from vents in the area of the present-day Akrotiri peninsula and continued to produce different kinds of lavas and pyroclasts (Friedrich, 1994). However, the most characteristic type of activity over the last 200.000 years has been the cyclic construction of shield volcanoes interrupted by large explosive and destructive events like the Minoan eruption.

The creation and evolution of Santorini volcanic field 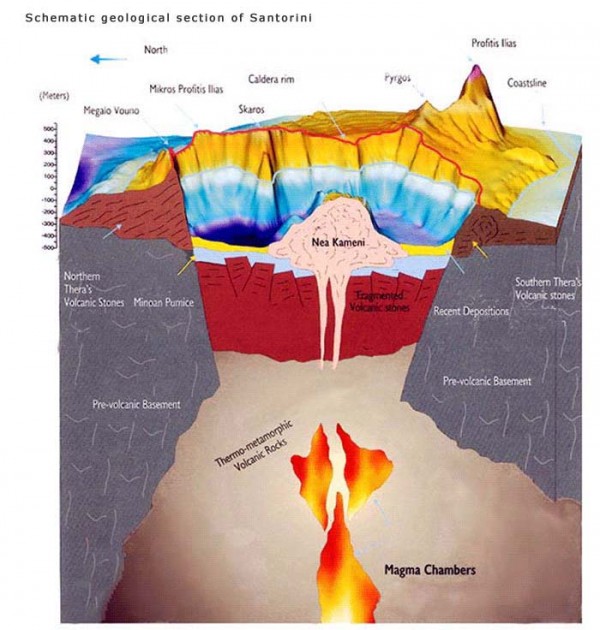 Many historians believe the explosive eruption of Santorini in the Aegean Sea in 1500BC caused a tsunami that brought widespread devastation to the eastern Mediterranean and Crete. In about 1600 B.C., roughly three centuries before the Trojan War, the Santorini volcano, 200 times as powerful as the Mount St. Helens explosion, sent waves hundreds of feet high across the Mediterranean, devastating Crete, capital of the Minoan empire, its fleet and its coastal cities. Fatally weakened, the empire was later conquered by the Mycenaeans of the Greek mainland, who established the model for Western culture.

Santorini is a picturesque Greek island in the south Aegean Sea and the most active volcanic centre in the South Aegean Volcanic Arc. Santorini is a complex of overlapping shield volcanoes. The island location is  36.4N, 25.4E and the elevation is 1,850 feet (564 m). It is 80 sq. km.

It is characterized by earthquakes at depths of 150-170 km that mark the subduction of the African underneath the Eurasian plate, more precisely the Aegean subplate, at a rate of up to 5 cm per year in a northeasterly direction.  The subduction zone dips at angles of 30-40E and the boundary of the two plates is indicated by the Ionian, Pliny and Strabo deep-sea trenches south of Crete. While the Pliny and Strabo trenches are predominantly of strike-slip nature, the Ionian trench is related to thrusting.

The crust of the Aegean is continental with thicknesses in the range of 20-32 km; compared with average crustal thicknesses of the mainland of Greece and Turkey, 40-50 km, a stretching factor of about two due to tectonic extension is implied. The strongest extension seems to have been in the Cretan Trough whereas the Central Aseismic Plateau (CAP) on which the Cyclades are situated forms a relatively stable strongly faulted crust block. The volcanic centers of the Aegean Arc are placed along the southern rim of the CAP. They are aligned on five 60E NE-going seismic lineaments that are interpreted as deep lithosphere rupture zones which permit mantle-derived magma ascent.

Most of the tectonic lines seen both on Santorini and on seismic profiles follow the general southwest-northeast trend. The most important one is named Kameni Line. It intersects the caldera and defines most of the known eruption centers. It aligns the Christiania islands, the Akrotiri peninsula and Palea and Nea Kameni. A parallel one, the Columbo line, perhaps identical with the Kameni line, passes through the centers of Megalo Vouno, the maar at Cape Columbo beach and the Columbo volcano. It seems that the rising magma has exploited existing deep-reaching tectonic fault zones.

The caldera and structural setting of the Santorini volcanic field (map)

Santorini and the Atlantis legend