Penn State geoscientists made analysis of small, repeating earthquakes in an Antarctic ice sheet. They point that it may  lead to an understanding of glacial movement and also shed light on stick slip earthquakes like those on the San Andreas fault or in Haiti. Glacial earthquakes can provide a simple model for the stick slip earthquakes that occur between landmasses. Between debris-laden glacial ice and bedrock, basal seismicity can develop that yields information about bed properties, stress distribution, outburst flooding and crevassing and calving.

“No one has ever seen anything with such regularity. An earthquake every 25 minutes for a year.”  Lucas K. Zoet, Penn State/Iowa State University

During the Transantarctic Mountains Seismic Experiment (from 2002 to 2003) on the David Glacier in Antarctica scientists found that the local earthquakes on the glacier (about 20,000 identified) were predominantly the same and occurred about every 25 minutes. The remarkable similarity of the waveforms  indicates that they share the same source location and source mechanisms, the researchers note in the current Nature Geoscience. Unfortunately, the seismographic instruments that were on the glacier in 2002 no longer exist, and information is coming from only one source at the moment.

David Glacier in Antarctica is a large outlet glacier that drains 4% of East Antarctica’s ice sheet into the Ross Sea. 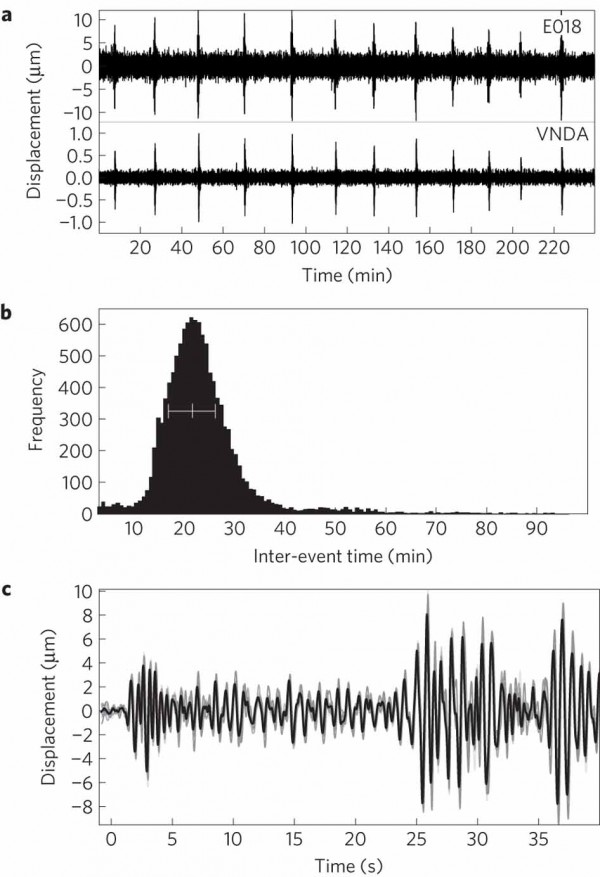 a, A representative seismic record of an ~ 220 min period from station E018 in the TAMSEIS array and station VNDA, which is part of the Global Telemetered Southern Hemisphere Network. b, A distribution of inter-event timing over the ~ 300 day period of regular repeating events, with standard deviation in white bars. c, A stack of 10 waveforms from station E018 indicating a high degree of similarity between events. (Motion of an Antarctic glacier by repeated tidally modulated earthquakes)

Scientists suggest that the same subglacial asperity repeatedly ruptures in response to steady loading from the overlying ice, which is modulated by stress from the tide at the glacier front. They suggested that part of the bedrock is poking through the ductile till layer beneath the glacier. The researchers have determined that the asperity – or hill – is about a half mile in diameter.

The glacier, passing over the hill, creates a stick slip situation (similar to the San Andreas fault). The ice sticks on the hill and stress gradually builds until the energy behind the obstruction is high enough to move the ice forward. The ice moves in a step-by-step manner rather than smoothly. 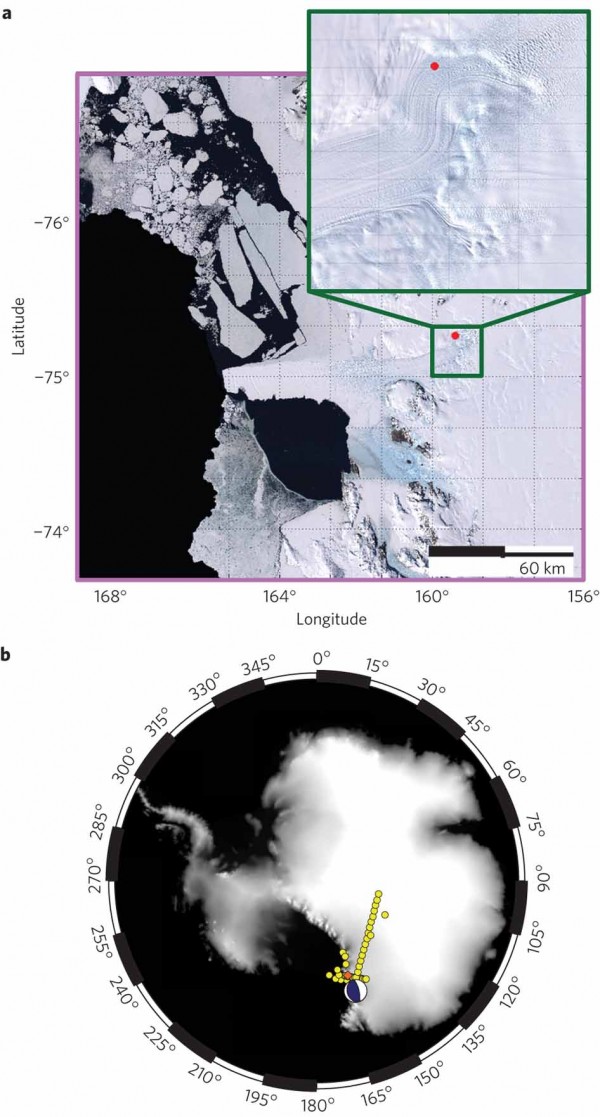 a, LIMA imagery of David Glacier with epicentre location (red dot). b, The TAMSEIS array consists of installations (yellow circles) arranged in three segments: the 16-station linear sub-array oriented East–West with 20 km spacing; the 17-station sub-array oriented north-northeast–south-southwest with 80 km spacing; and the nine irregularly spaced stations plus the GT station VNDA (orange diamond) along the Ross Sea coast. The resolved focal mechanism (blue/white circle) of a low-angle thrust fault is plotted at the location of events at David Glacier.

The edge of the ice floats out over the water and the floating ice is subject to the action of tides, like most glaciers near oceans. Tides push it back, making the time between slips slightly longer when it comes, and when it goes out, the time between slips decreases. The researchers note that the tides are acting at the ground-line, a long way from the location of the asperity and therefore the effects that shorten or lengthen the stick slip cycle are delayed.

Featured image: A small section of the Drygalski ice tongue extending from the David Glacier 80 kilometres into the Ross Sea, Antarctica (Credit: LivingTravel)