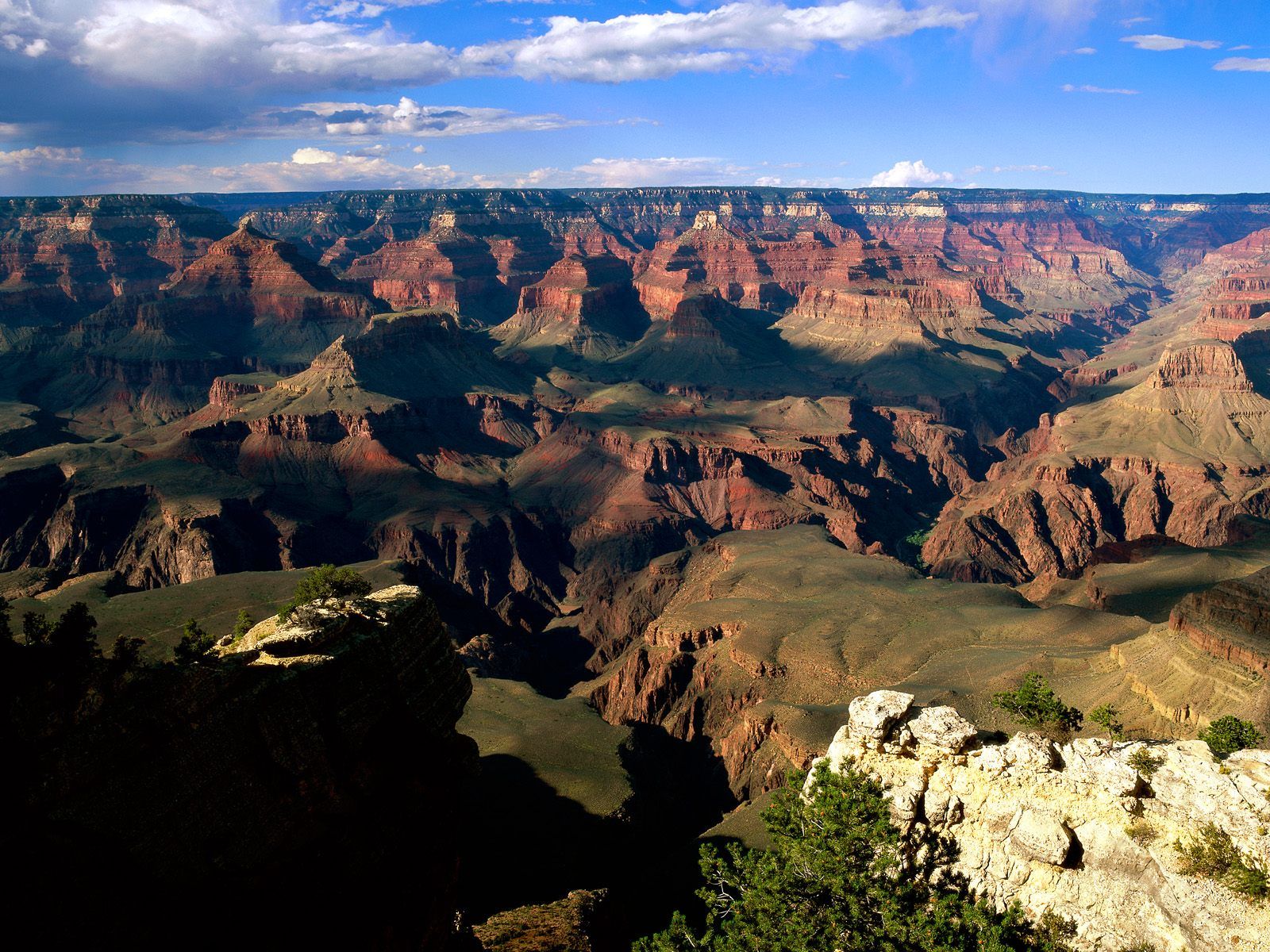 Most of Arizona has experienced low levels of recorded seismicity, with infrequent moderate and large earthquakes in the state. However, a new study published by Arizona State University researchers found nearly 1,000 earthquakes rattling the state over a three-year period, including many in regions of Arizona that were previously thought to be seismically inactive. There is perception that earthquakes in Arizona are rare, but that is because comprehensive analyses of seismicity within Arizona have not been previously possible due to a lack of seismic stations in most regions.

Jeffrey Lockridge, a graduate student in ASU’s School of Earth and Space Exploration and the project’s lead researcher, used new seismic data collected as part of the EarthScope project to develop methods to detect and locate small-magnitude earthquakes across the entire state of Arizona. (His results appear in a paper titled, “Seismicity within Arizona during the Deployment of the EarthScope USArray Transportable Array,” published in the August 2012 issue of the Bulletin of the Seismological Society of America). 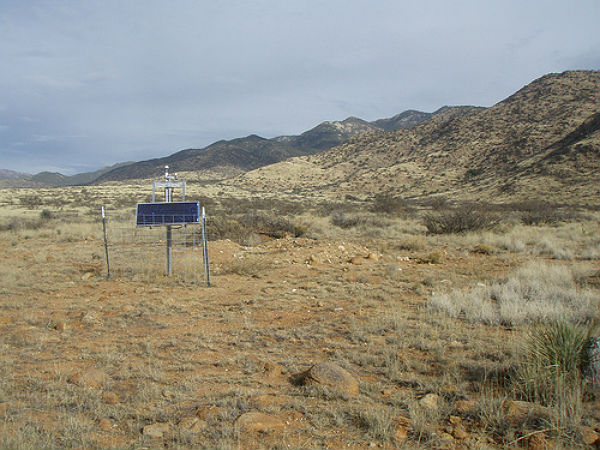 Nearly 60 USArray stations were installed in Arizona from 2006 to 2009 as part of the EarthScope project. Station 118A, seen in this photo, recorded ground motion north of Wilcox, in southeastern Arizona, from April 6, 2007 to Jan. 21, 2009. Photo by: Incorporated Research Institutions for Seismology (funded by NSF EarthScope)

EarthScope’s USArray Transportable Array was deployed within Arizona from April 2006 to March 2009 and provided the first opportunity to examine seismicity on a statewide scale. Researchers expected to find some earthquakes outside of north-central Arizona, where the most and largest events had previously been recorded, however, they found many in other areas of the state. From April 2007 through November 2008, other networks detected only 80 earthquakes within the state, yet over that same time ASU’s researchers and EarthScope project  found 884 earthquakes, or 11 times as many, which is really quite staggering.

One-thousand earthquakes over three years may sound alarmingly high, but the large number of earthquakes detected in the study is a direct result of the improved volume and quality of seismic data provided by EarthScope. About 91% of those earthquakes were in fact “microquakes” with a magnitude of 2.0 or smaller, which are not usually felt by humans. Some regions experiencing small earthquakes may produce larger earthquakes. Geologists use small magnitude earthquakes to map otherwise hidden faults beneath the surface.

Several million earthquakes are estimated to occur worldwide each year (the vast majority are too small to feel, but their motions can be measured by arrays of seismometers). 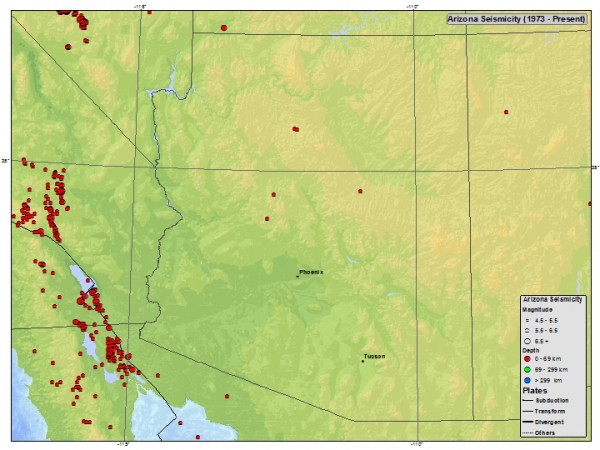 No earthquake in recorded history has caused deaths or injuries in Arizona. In the past century or more, 14 tremors of intensity V to VII have centered within its borders, of which 12 were reported after Arizona entered the Union in February 1912. All of these shocks, however, were moderate in intensity, with one intensity VII, one VI-VII, four VI, and eight V.

Probably the most famous earthquake in this region occurred in 1887 near Bavispe, Mexico, about 190 miles southeast of Tucson. The temblor caused great destruction near its epicenter. From Guaymas to Nogales, Mexico, Benson and Tucson, Arizona, and at towns as far distant as Albuquerque, New Mexico, water in tanks spilled over, buildings cracked, chimneys were toppled, and railroad cars were set in motion.

The first damaging earthquake known to have centered within Arizona’s borders occurred on January 25, 1906, the year of the great San Francisco earthquake, and of a damaging series of shocks at Socorro, New Mexico. The shock was violent at Flagstaff, about 115 miles north of Phoenix.

The cumulative terror produced by a series of 52 earthquakes, from September 10 to 23, 1910, caused a construction crew in the Coconino Forest near Flagstaff to break camp and leave the area. Boulders rolled down on their camp from nearby mountains, and the earth maintained a constant quiver. The shocks grew in intensity until September 23, when a very strong shock raged throughout northern Arizona. It was so severe north of the San Francisco Mountains that Indians fled from the region.

A tremor on August 18, 1912, caused a 50-mile-long crack in the earth north of the San Francisco Range. Houses were damaged at Williams, and the shock was strong in Coconino County, north of Flagstaff. Rockslides roared down the mountainsides, and the earth seemed to roll “like waves on the Colorado River.”

A shock that cracked walls and plaster at Wellton, located a few miles east of Yuma in southwestern Arizona, occurred January 2, 1935. Although few residents of the small town were frightened by the tremor, everyone felt the ground quiver, and homes shake. Eight days later, a slightly stronger earthquake awakened sleepers at Grand Canyon, 175 miles north of Phoenix. Many were frightened by the distinct subterranean rumble and the movement of their houses. Walls were cracked in some cases, and rockslides occurred in the mountains. Three slight foreshocks were felt by Grand Canyon residents during the first week of January, and one very minor aftershock was noted on January 15.

On January 16, 1950, a strong earthquake in Apache County left several cracks in the ground as it rumbled through the small town of Ganado. The cracks, one-half inch wide and up to 12 feet long, extended in a north-south direction near the Ganado trading post.

Yuma, situated in the southwestern-most corner of Arizona, is at high-risk from powerful earthquakes from the nearby San Andreas Fault and its splay faults, the Imperial and Algodones faults. In 1979, rupture along the Imperial fault produced a powerful, magnitude  6.4 event, sending surface waves (Love and Rayleigh waves) racing towards Yuma, 70 miles to the east.  Observers in Yuma reported the ground rising and falling before them, in a manner similar to water wave behavior in oceans and lakes.