One of the largest Sunspots of the current cycle is rotating into position for Earth directed Solar Flares. Sunspot 1520 has a Beta-Gamma-Delta magnetic configuration and may produce an X-Class flare. M1.1 flare at 05:10 UTC was followed up with a M2.0 flare at 06:27 UTC this morning.

Sunspot 1515 is now partially rotated onto the western limb. Another sunspot is forming just to the southwest of 1520 and it appears to be magnetically independent and may be assigned its own sunspot number. There will remain the chance for M-Class solar flares.

Solar activity is expected to be moderate with a chance for X-class events for the next three days (10 - 12 July). NOAA forecasters estimate an 80% chance of M-flares and a 25% chance of X-flares during the next 24 hours. 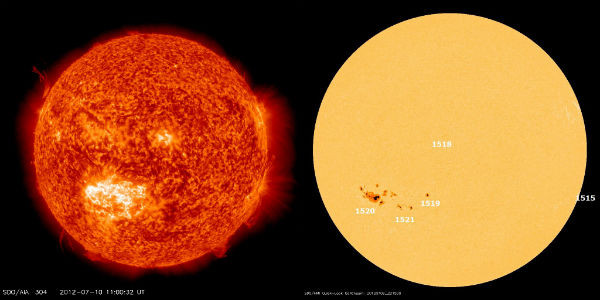 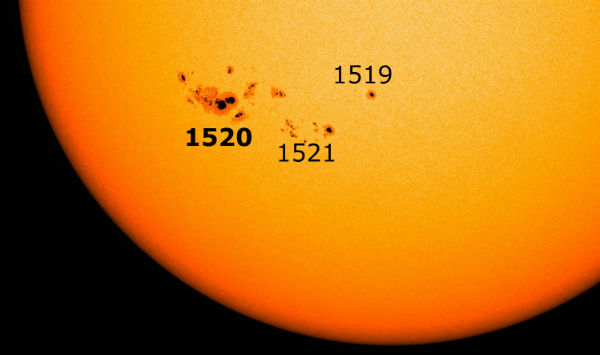 Geomagnetic Storming reaching the minor G1 level was observed within the past 24 hours. The Bz component of the Interplanetary Magnetic Field has been pointing south at times and this could help re-intensify geomagnetic activity. On July 9th, the IMF near Earth tipped south, opening a crack in our planet's magnetosphere. Solar wind poured in and ignited the lights. Solar wind conditions remain favorable for high-latitude auroras on July 10th. NOAA forecasters estimate a 25% chance of polar geomagnetic storms. A solar wind stream flowing from the Earth-facing coronal hole could reach Earth on July 10-11.