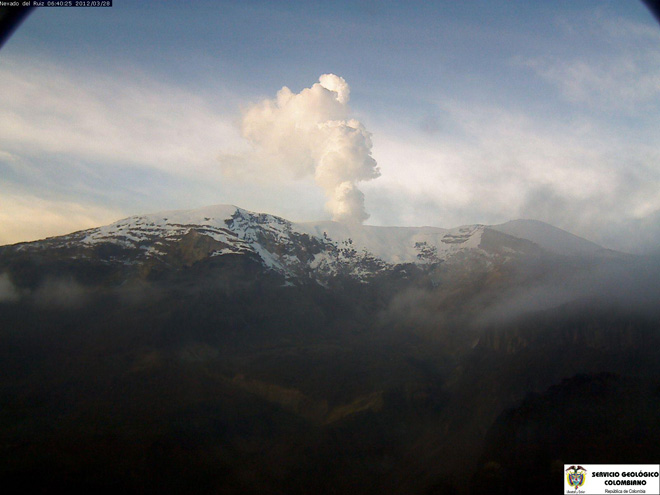 Colombian volcanologists indicated that the likelihood of an eruption at the Nevado del Ruiz volcano has increased, after an earthquake Tuesday morning in cental Colombia.

Local authorities have raised the alert level from yellow to orange following a report issued by the Manizales Volcanological and Seismological Observatory. An orange alert does not mean an eruption is imminent.

Web cameras in the area “show the emission of ash,” which “has been felt in the area surrounding the volcano,” according to Seismologic and Volcanic Observation director Gloria Patricia Cortes, who also noted the impact on city of Manizales and municipality of Villamaria.

Cortes said that relief agencies in the area are prepped for immediate action, in case of emergency. “The recommendation now is to use masks in the city of Manizales because of the persistent rain of ashes,” said Cortes, who also said that she did not expect a lava flow but did not rule out that the emission of ash could continue for some time.

According to officials, small amounts of ash could be dispersed from the volcano to remote areas depending on wind direction and strength. The volcano has been fluctuating at high activity levels for the past several months and was lowered to alert level yellow earlier this month. The last eruption of the volcano in 1985 killed an estimated 25,000 people and destroyed the town of Armero.