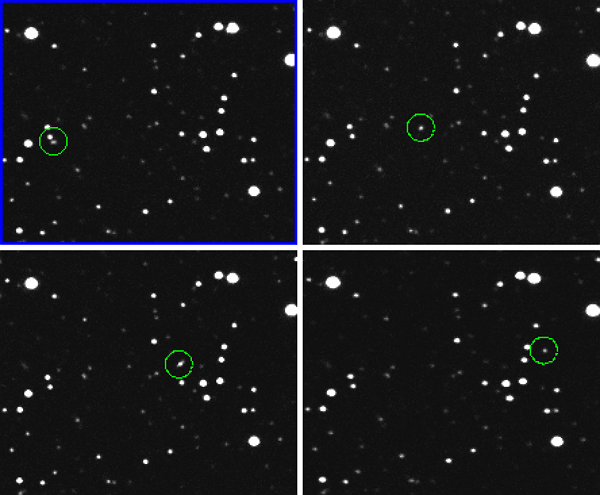 According to its absolute magnitude (H=28.8) this asteroid has an estimated size of roughly 3-10 meters, so it is a small object. There is no danger of a collision according to the asteroid’s orbit. This small asteroid would be too small to cause significant damage to our planet. It would likely disintegrate almost entirely in the atmosphere, peppering the ground below with relatively small meteorites. 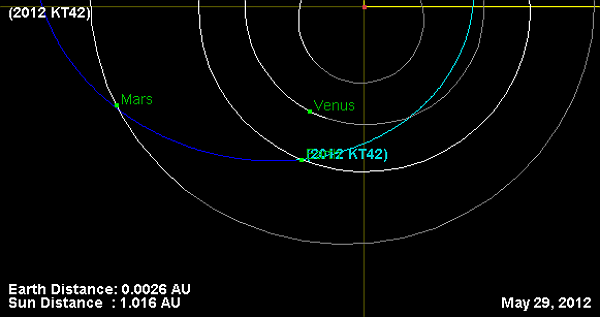 The asteroid was discovered by A. R. Gibbs of the Catalina Sky Survey in the course of Mt. Lemmon Survey with a 1.5-m reflector + CCD on May 28, 2012 at magnitude ~18.1. While there is no cause for concern, this is one of the closest approaches recorded. It ranks # 6 on the top 20 list of closest-approachers to Earth.

According to calculation made by P. Tricarico, 2012 KT42 has experienced a partial eclipse while approaching Earth on May 28, 2012 between 14:05 UTC and 21:45 UTC, before the flyby. See animation below (click on it for a bigger version). Probably the first case ever of an approaching asteroid experiencing an eclipse and a transit during the same flyby with Earth. More info about this on Tricarico’s website.