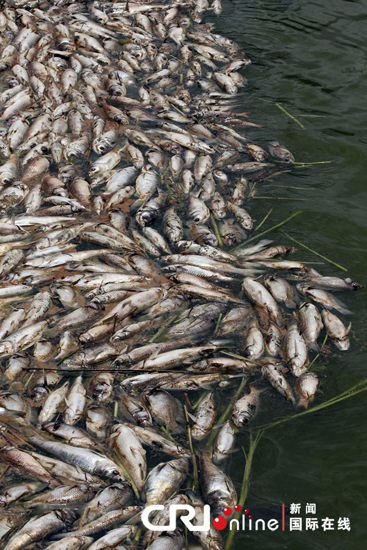 Over 50 thousand fish in a pond near an industrial area in the southern Chinese city of Shenzhen died overnight on Monday, CRI Online reports.

The dead fish are mostly concentrated in the northern corner of the pond, and half of the body of water is now covered with rotting fish.

Located in the Qiangxiaxin Village at the junction of the Guangming New District and Dongguan in Shenzhen, the fish pond is larger than two basketball courts in area.

“We have invested a total of 350 thousand yuan (about 56 thousand USD) in the form of 60 thousand fish; now it’s all over,” said Ms. Liu, the fish pond owner. “These fish have been raised for one year, and could have been sold at market three months later.”

Liu said she will not sell the dead fish at market despite suffering great financial losses as a result. She also suspects that heavy rain may have led to the pond being contaminated by toxic and harmful substances from a nearby building site in the Maike industrial area.

A manager surnamed Wen at the building site said that he is willing to cover any losses but stated that he is unaware of the presence of toxic materials at the site.