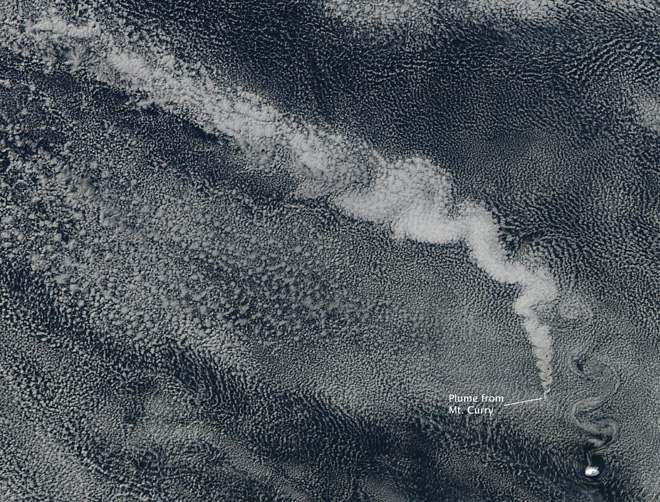 A new eruption on the remote Zavodovski Island in the South Sandwich island chain was detected by NASA’s Aqua satellite on  April 27, 2012.

The satellite picture shows a plume originating from the island’s active crater known as Mt Curry, or sometimes also referred to as Mt Asphyxia. It is possible that the plume is created by lava flows in contact with sea water, as it appears to be mainly steam.

Not much else is known about the eruption, because the island is uninhabited and extremely remote and has no monitoring on the island. Most of the information about this eruption will rely on remote sensing (satellite observations).

The South Sandwich Islands are a chain of volcanoes caused by the subduction of the Sandwich microplate under the South American Plate. Zavodovski is a largely unknown basaltic stratovolcano. The first eruption at Mt Curry was observed in 1819 and some unconfirmed reports of activity date back to 1908.

The 5-km-wide Zavodovski Island, the northernmost of the South Sandwich Islands, consists of a single 551-m-high basaltic stratovolcano with two parasitic cones on the east side. Mount Curry, the island’s summit, lies west of the center of the island, which is more eroded on that side.

Two fissures extend NE from the summit towards the east-flank craters, and a lava platform is located along the eastern coast. Zavodovski is the most frequently visited of the South Sandwich Islands. It was erupting when first seen in 1819 by the explorer Bellingshausen, and the volcano has been reported to be smoking during subsequent visits.