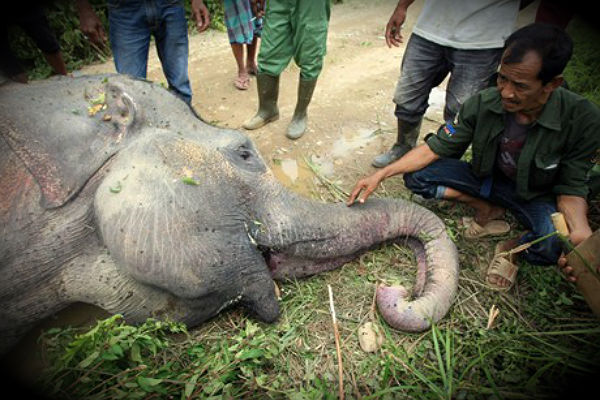 Environmental organization WWF called on the government Wednesday to investigate the death of a critically endangered Sumatran elephant allegedly poisoned at an Indonesian oil palm plantation. A ranger at the plantation in Krueng Ayon village, Sampoiniet subdistrict, Aceh Jaya district, on Sumatra island said he found the 18-year-old female elephant dying on Monday and that locals reported they had seen it walking around with a calf earlier that day according to JakartaGlobe. 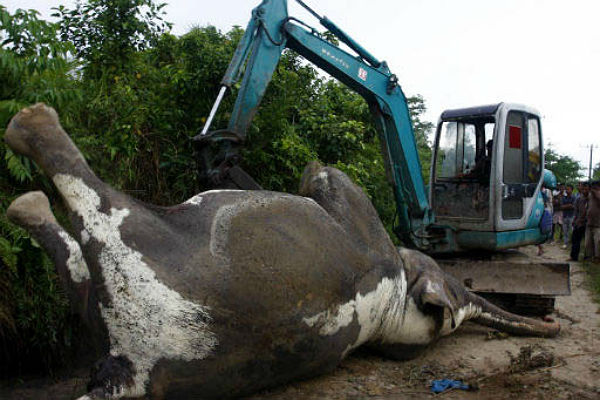 “When I found her, she was foaming at the mouth and bleeding from the rectum, which are strong signs of poisoning,” Mukhtar, the ranger  said, adding that he was unable to save her with medicine.

Mukhtar said the elephant’s calf was “crying” and “making noises” of distress as it stood by its mother dying on the ground. The conflict between animals in the jungle and humans had increased in the past decade as swathes of forest are cleared for agriculture. WWF changed the Sumatran elephant’s status from “endangered” to “critically endangered” in January, largely due to severe habitat loss driven by oil palm and paper plantations.

The Sumatran elephant is a rare and protected animal facing extinction because of illegal logging, lost habitat, and poachers.  There are less than 3,000 Sumatran elephants remaining in the wild, according to the International Union for Conservation of Nature, marking a 50 percent drop in numbers since 1985.

In its latest “red list” of threatened species, the IUCN noted that many of the remaining elephant communities were likely to disappear because they do not live in protected areas and there is a high risk of conflicts with humans. It cited studies showing that at least six herds disappeared between 2007 and 2009 in Riau province – a centre for the paper, pulp and palm oil industries. As plantations have expanded, Sumatra has experienced some of the worst deforestation rates in the world. Conservation groups said the Indonesian island has lost more than two-thirds of its natural lowland forest – the most suitable habitat for elephants – in the past 25 years. 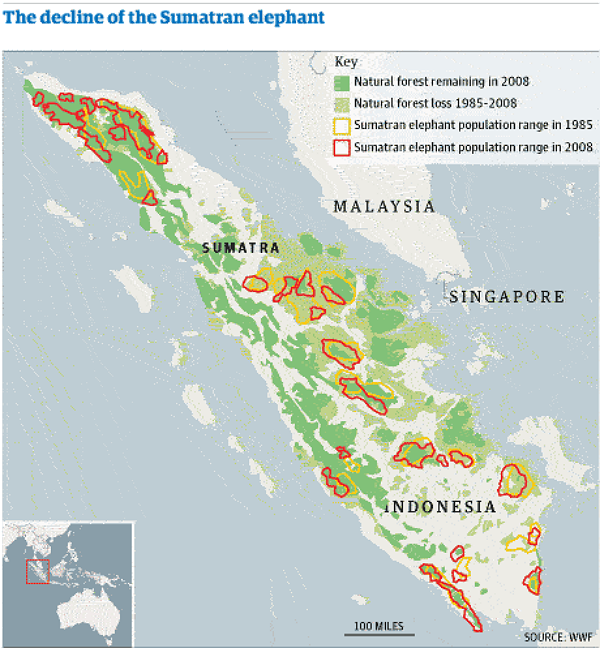 Sumatran elephants are the smallest of the Asian elephants. Males rarely develop long tusks, while those of adult females may be so short that they are hidden by the upper lip. This elephant can live up to 70 years in captivity. Sumatran elephants were once widespread on Sumatra.  Today, however, the subspecies only survives highly fragmented populations.  Within the last 25 years, the elephants have lost 70% of their habitat. According to IUCN, 85% of the animal’s remaining habitat is unprotected and likely to be converted for agriculture or other purposes.

Specific problems are associated with forest conversion to plantation development. As forests shrink, elephants are increasingly closer to fields and cultivated land, generating conflict with humans that often results in the death of the elephants by poisoning or capture, as well as economic losses to humans. (WWF)

The Javan rhino was declared extinct in Vietnam in October after the last one was found dead with a bullet in its leg and its horn sawn off. A month later, it was followed by Africa’s western black rhinoceros and warnings that the Sumatran rhino is on the brink of extinction in Indonesia.