Dust from the White Sands dune field in New Mexico rises thousands of feet from the valley floor and drifts over the snowy peaks of the Sacramento Mountains driven by southwesterly winter winds. White Sands National Monument lies in the 50 kilometer (31 mile) wide Tularosa valley, between the dark rocks and forested slopes of the Sacramento Mountains and the San Andres Mountains. The lower and warmer ridge line of the San Andres was without snow on the day this photograph was taken. The striking black lava flows of the Carrizozo lava field also occupy the valley floor . The darker tones of agriculture in the Rio Grande floodplain can be seen along the left margin of the image bellow. 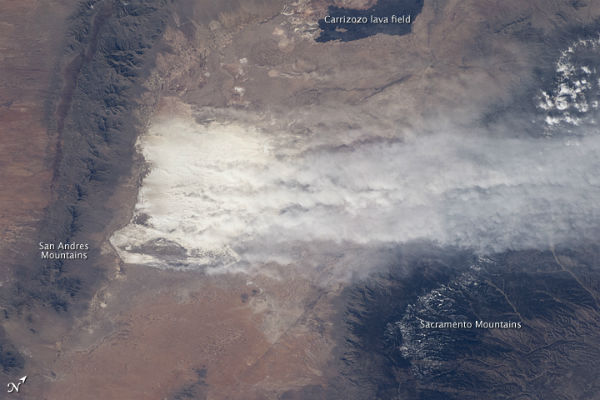 The sand dunes of this national monument are white because they are composed of gypsum, a relatively rare dune-forming mineral. The gypsum is deposited during the evaporation of mineral-rich waters in an ephemeral lake in the western part of the Monument. Erosion of the deposits, together with wind transport, provides the granular material for the dunes. The dunes’ brilliance, especially contrasted against the nearby dark mountain slopes, makes them easily identifiable to orbiting astronauts. The white speck of the dunes was even visible to astronaut crews looking back at Earth on the way to the Moon.

Astronaut photograph ISS030-E-174652 was acquired on February 28, 2012, with a Nikon D2Xs digital camera using a 70 mm lens, and is provided by the ISS Crew Earth Observations experiment and Image Science & Analysis Laboratory, Johnson Space Center. The image was taken by the Expedition 30 crew. It has been cropped and enhanced to improve contrast, and lens artifacts have been removed. The International Space Station Program supports the laboratory as part of the ISS National Lab to help astronauts take pictures of Earth that will be of the greatest value to scientists and the public, and to make those images freely available on the Internet. Additional images taken by astronauts and cosmonauts can be viewed at the NASA/JSC Gateway to Astronaut Photography of Earth. Caption by M. Justin Wilkinson, Jacobs/ESCG at NASA-JSC.