More than 6 million birds die every year as they migrate from the United States and Canada to Central and South America, according to a new study published in the open access journal PLoS ONE. The birds are killed by the 84,000 communication towers that dot North America and can rise nearly 610 meters (2,000 feet) into the sky.

Researchers found that the taller the tower the greater the threat, and the tallest 1.9 percent of towers account for 71 percent of the mortalities. The birds are generally killed not by running into the tower itself, but by getting caught in the dozens of cables that prop up the thin freestanding structures. During bad weather, the birds are pushed down by cloud cover and fly at lower altitudes. The clouds also remove navigation cues such as stars, leaving only the red lights of the towers.

“One of the things this country has been great about is saying we care about not losing species on our watch. With these towers, we are killing birds in an unnatural way. This is senseless.”  Lead author Travis Longcore of the University of Southern California

In the presence of the solid red lights, the birds are unable to get out of their spell. They circle the tower and run into the big cables holding it up. Towers with blinking red lights, on the other hand, cause fewer deaths. The authors estimate that replacing the steady-burning lights with blinking lights on the roughly 4,500 towers greater than 150 meters tall could reduce mortality by about 45 percent, or about 2.5 million birds. 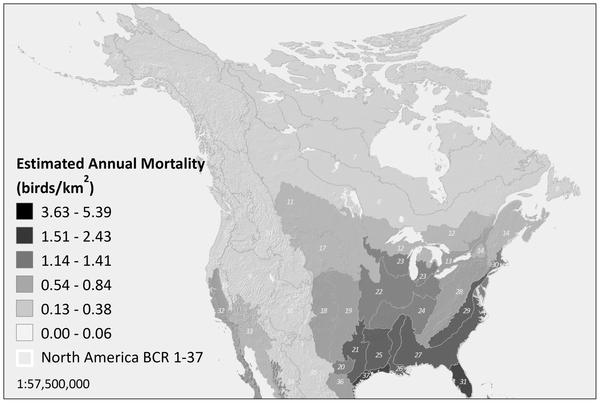 The U.S. Fish and Wildlife Service estimates that up to 50 million birds are killed each year at communications towers. Window crashes, by comparison, kill between 100 and 900 million birds a year, and are still by far the largest human-related cause of bird death. The aviation warning lights on the towers disrupt the birds’ celestial navigation and draw them into a halo of light. The birds then become trapped and circle endlessly, colliding with each other and the tower, or eventually dropping to the ground from exhaustion.

At least 231 species have been affected, with neotropical migrants making up a large proportion of all species killed. WatchList species killed in significant number include the Wood Thrush, Golden-winged Warbler, Cerulean Warbler, and Seaside Sparrow.