Over the past several weeks, heavy seasonal rain caused major flooding throughout much of Colombia. Heavy rainfall in recent weeks have caused major flooding of the nearby . The resulting floods of Bogota and Chic0 rivers have affected more than 2,000 families in the region, forcing most to evacuate to higher ground. Heavy siltation of the Chico river bed has caused the easy re-routing of the flow of the river towards agricultural lands and settlements on both sides of the river. There are dozens of hectares of titled rice and corn lands that were already washed out due to flooding. The increase in rainfall raises the probability of flooding in different areas of the county, as well as help produce landslides.

Local officials reported flood waters as deep as 13 feet in some areas in the town of Cota, which is located just north of Bogota. In the Valle del Cauca Department, in western Colombia, local officials have reported more than 500 homes flooded. More heavy rain is expected across the country over the next few weeks as the rain season continues. 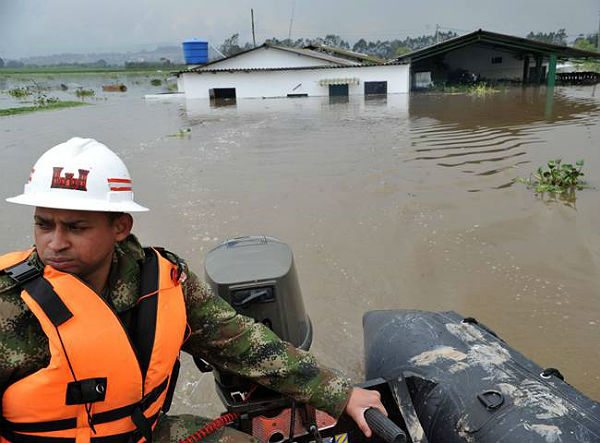 The National Unit for Disaster Risk Management (UNGRD) has reported that the seasonal rains have claimed the lives of 19 people and have left over 60,000 people homeless throughout the country. UNGRD reports that these numbers are  85 percent lower than in the same period in 2011 when 134 Colombians lost their lives, while more than half a million people were affected.

Featured image: A truck and a home sit under flood waters after heavy rains triggered the Chico River to overflow its banks in Cota, Colombia.

Featured image: Cota was one of the towns flooded when the Bogota and Chicu rivers overflowed in central Colombia