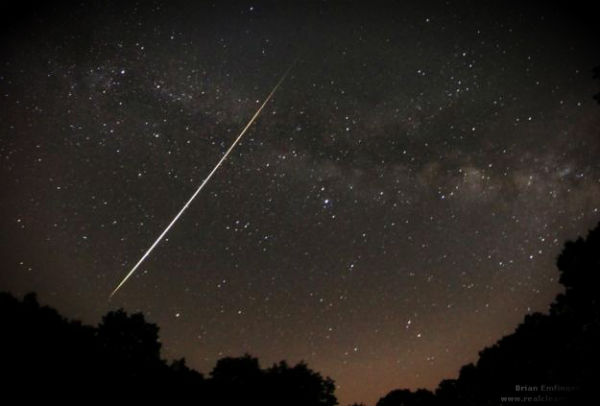 Earth Day in 2012 coincided with the Lyrid maximum. Many observers were pleasantly surprised thanks in part to the lack of a bright moon.! According to the International Meteor Organization, the Lyrid meteor shower peaked on April 22nd around 0000 UTC with a maximum between 20 and 30 meteors per hour.

The Lyrid meteor shower has been observed by humans for more than 2,600 years and occurs each year in mid-April when the Earth passes through a stream of dust left behind by the comet Thatcher (C/1861 G1). The comet dust can reach speeds of up to 110,000 mph (177,027 kph) as it slams into Earth’s atmosphere, causing it to ignite as dazzling meteors. 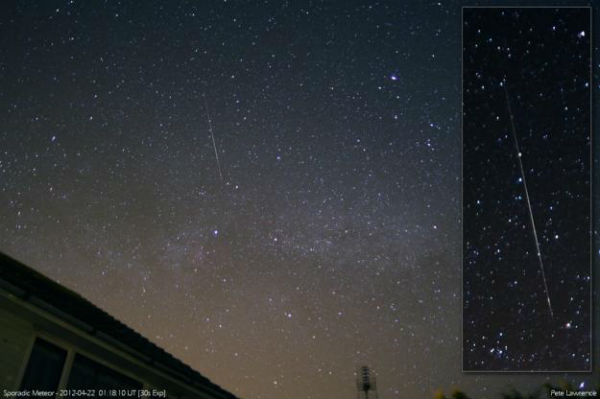 A team of students from Union High School and Home Street Middle School in Bishop, Calif., launched the camera-equipped balloon late Saturday night (April 21). And up in space; the Lyrids were expected to be visible to astronauts on the International Space Station. NASA meteor expert Bill Cooke at the agency’s Marshall Space Flight Center in Alabama coordinated efforts to track meteors on the ground, by the student balloon and by station astronauts to create an unprecedented look at the Lyrid meteor shower. The Marshall center posted video and images of the student balloon launch online, along with camera views of Earth from the station, but whether Lyrid meteors were actually seen by astronauts remains to be seen. Cooke also led an NASA webchat and video stream on the agency’s website that provided live views from meteor cameras for observers plagued by bad weather. (Space.com)

In May, the Eta Aquarids — one of two annual meteor showers created by remnants of the famed Halley’s comet — will peak between May 5 and 6, according to a NASA guide.