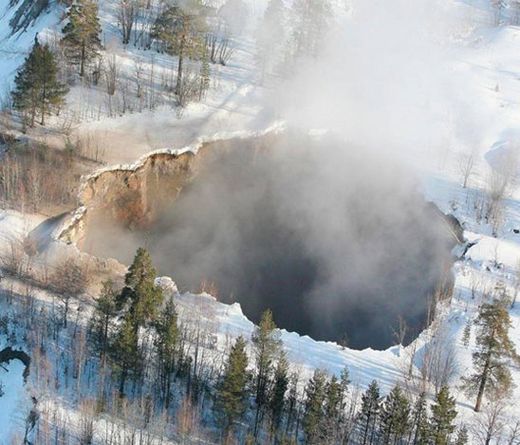 Giant sinkhole that opened on Tuesday, March 20, 2012 in Sweeden keeps expanding. The pit, called the “Fabiangropen” (Fabian pit) is more than 150×150 meters high. It is located at Gällivare, 75km from Kiruna, Sweden and was created when the ceiling of the “Fabian” part of the Malmaberget iron mine collapsed,

According to the local residents the tremors from the pit can last up to 45 minutes and many residents are annoyed because of the loud noises.

It is believed that the cause of the collapse was heightened activity at the iron mine. The collapse has not affected the work in the mine and no injuries have been reported. The actual breakthrough or collapse process is said to have been a fairly peaceful event. Vibrations have been felt in the community “Kilen” nearby.

The mining company LKAB is continually taking new pictures of the pit.

“I’m scared, I do not want to be alone in the house when it happens. It is so loud and it only gets louder and louder. It is like having an ariplane flying low above the house. It is just like the beginning of a volcano eruption, ” said Berit Hannu who lives very close to the pit.

Malmberget is known as a major site for the extraction of iron ore from deep mines by the company LKAB. The iron ore mining started in 1741 at the Illuvaara mountain, later known as Gellivare malmberg and eventually just Malmberget. The first train transporting iron ore was loaded in 1888 – this was the beginning of the great iron ore rush which would change the entire area of Northern Lapland. In Malmberget there were lots of job opportunities but no dwellings – a striking resemblance to the conditions during the gold rush in North America. During the first years, workers lived in shacks built from wasted dynamite crates.