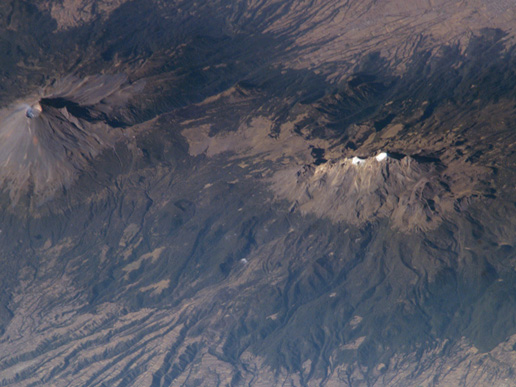 The most serious occurred just after 9 a.m. Sunday, sending a vapor cloud a mile (1.6 km) into the air.

Mexico’s National Disaster Prevention Center issued a precautionary warning to residents, advising them to stay alert for a worsening situation and to keep at least seven miles away from the volcano’s crater.

The service predicted continuing “moderate exhalations, some with ash, sporadic low to moderate explosions with likely burning fragments emitted close to the crater, and flaming magma within the crater visible at night.” Popo’s latest fuming comes amid a series of earthquakes striking southern and central Mexico in the past three weeks. Several 6 magnitude quakes struck Wednesday, but no damage.

A midday 7.4 quake on March 20 damaged hundreds of buildings in Oaxaca and Guerrero states and sent hundreds of thousands of residents scrambling into Mexico City’s streets.

The volcano, whose full name means Smoking Mountain in the Nahuatl tongue of the Aztecs, is a fairly active volcano, with such exhalations occurring regularly.

Popocatepetl is one of Mexico’s most active volcanoes. After almost 50 years of dormancy, “Popo” came back to life in 1994 and has since then been producing powerful explosions at irregular intervals.
In the past centuries befor European invasions, large eruptions produced giant mud flows that have buried Atzteque settlements, even entire pyramids.

Events like Sunday’s serve to prevent more dangerous pressure from building inside the volcano, scientists say. Popo experienced similar moderate activity several times in 2011 and again at the beginning of this year. Though more than 40 miles from downtown Mexico City, Popo and its adjoining snow-capped sister mountain, Iztaccihuatl dominate the Valley of Mexico and the surrounding highlands, home to some 25 million people.

at left. The neighboring volcano is Iztaccíhuatl (the "Woman in White&quot

. The faint plume emanating from Popocatepetl’s summit crater shows the ever-present hazard the volcano represents to the 25 million people living in the region, including the nearby city of Amecameca, as well as the metropolitan centers of Mexico City to the northwest and Puebla to the east. Credit: NASA” >

Mexico City’s teeming working class suburbs now lick at the mountains’ base. The city of Puebla, home to 1 million people, stands a few dozen miles from the volcano eastern slopes. Aztec legend held that Popocatepetl was a warrior deeply in love with Izta, whose silhouette can resemble a sleeping woman from the right angles. Sent by her father to battle to prove his worth, Popo was falsely reported killed. Iztaccihuatl died grief-stricken. When he returned from battle, Popo hunched next to her body, bowed his head and died of heartbreak.