A steam plume flows blows south from the peak of Pagan Island’s northernmost volcano in this photograph by an astronaut on the International Space Station (ISS). Pagan is part of the Commonwealth of the Northern Marianas, an island chain of volcanoes that form the margin between the Pacific Ocean (to the east) and the Philippine Sea (to the west). Pagan is made up of two stratovolcanoes separated by an isthmus, and it is one of the more volcanically active islands in the Marianas. The island was completely evacuated in 1981 when a large eruption forced the small Micronesian community to flee. Before the early months of 2012, the most recent eruption occurred in 2010. 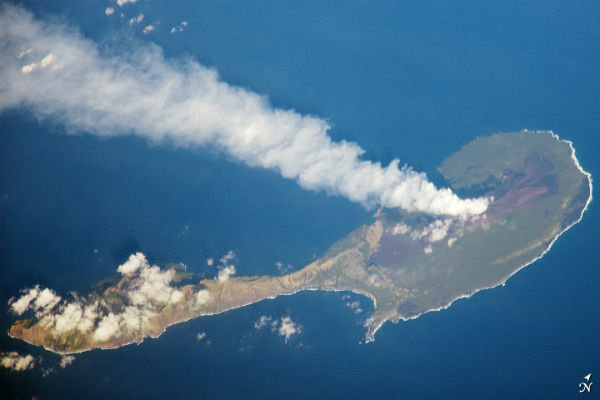 The islands themselves mark the tectonic boundary where the old, cold Pacific plate is being subducted at the Marianas trench beneath the younger, less dense crust of the Philippine Sea. The subduction results in substantial volcanic activity on the upper plate, forming the island arc of the Marianas. Considered to be one of the classic examples of an oceanic subduction zone, the Marianas Trench includes the deepest spot in the Earth’s oceans (more than 10,000 meters). (EarthObservatory) 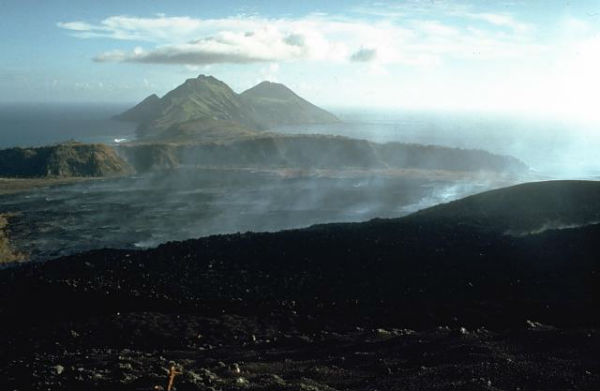 Featured image: A prominent eruptive fissure cuts across the summit of North Pagan volcano on May 15, 1981, on the opening day of the 1981 eruption. It is seen here on May 26, 1981, looking across a north-flank cinder cone that formed along the fissure during the 1981 eruption. The foreground trees are from a devastated coconut plantation. (Credit: Norm Banks, 1981, U.S. Geological Survey).