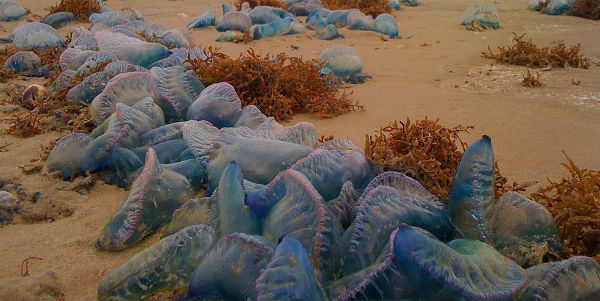 Thousands of ocean dwellers that look like jellyfish  were seen washed ashore this weekend on the sands of the north end of South Padre Island in Texas. They have been identified as the Portuguese Man-of-War, a poisonous siphonophore. Officials points that it was a rare incident and is extremely uncommon in such large numbers. The concentration of jellyfish that was reported was in an isolated area several miles north of County Beach Access No. 6.

The animals are often found in warm waters in groups of 1,000 or more. They have no means of propulsion and rely mostly on wind and ocean currents for movement, which may be what caused them to end up in the sand. Due to high tides on Saturday and Sunday, the beached creatures remained a sight to see until Coastal Resources crews arrived Monday.

Contrary to popular belief, the Portuguese Man O’ War (Physalia physalis) is actually a colonial hydroid. Each individual animal (zooid) specializes in function and are joined together and physiologically integrated to the point where they would not survive separately. Though the invertebrate looks like a jellyfish, it is a colony of organisms that work together and are capable of delivering a venom-filled sting. The venom, used to kill fish and other small organisms, is rarely deadly to humans but can inflict excruciating pain. Contact should be avoided with any Man-of-War regardless of its size. Should a sting occur, meat tenderizer can be applied to the affected area for pain relief.

Different years bring different invasions of marine life, and even mysterious oil spills. One year it was large droves of starfish, and one year there were  hog-nose rays and stingrays the bottom looked paved with ’em. Offshore storms sometimes bring in some kind of odd whip-looking kelp. Yes, we’ve even gotten whales – though pygmy sized ones – on the beach. We also had a bird fallout one year in which the beaches were covered in small migratory birds. It is always a mystery to me. 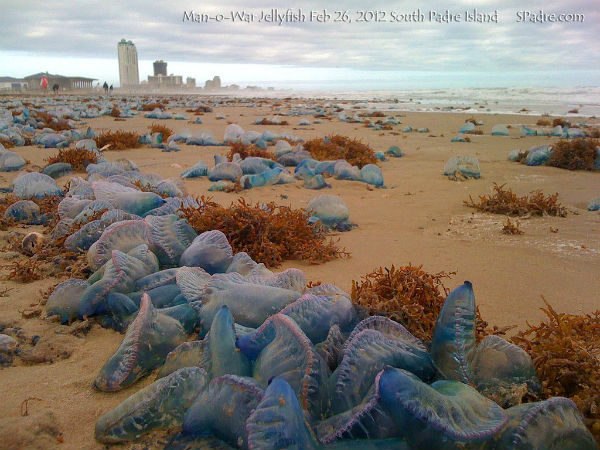 The Portuguese man o’ war lives at the surface of the ocean. The gas-filled bladder, or pneumatophore, remains at the surface, while the remainder is submerged. Since the man o’ war has no means of propulsion, it is moved by a combination of winds, currents, and tides. Although it can be found anywhere in the open ocean (especially warm water seas), it is most commonly found in the tropical and subtropical regions of the Pacific and Indian oceans and in the northern Atlantic Gulf Stream. The man o’ war has been found as far north as the Bay of Fundy and the Hebrides.

They wash ashore along the northern Gulf of Mexico and east and west coasts of Florida. An abundance of Portuguese men o’ war can be found in the waters of Costa Rica, especially in March and April, while they are also found off of Guyana,Colombia and Venezuela. They wash up on the shore during certain months of the year. They are reported abundantly in the waters near Karachi, Pakistan in the summer months, and are also common in the ocean off parts of Australia, where they are known more commonly as ‘blue-bottles’, and New Zealand. During these months, they come ashore in the Gulf of California after rain, where they are known as agua(s) mala(s) by locals. They are also frequently found along the east coast of South Africa, particularly during winter storms if the wind has been blowing steadily on-shore for several hours, as well as around the Hawaiian Islands.

Strong onshore winds may drive them into bays or onto beaches. It is rare for only a single Portuguese man o’ war to be found; the discovery of one usually indicates the presence of many, as they are usually congregated by currents and winds into groups of thousands. Attitudes to the presence of the Portuguese man o’ war vary around the world. Given their sting however, they must always be treated with caution, and the discovery of men o’ war washed up on a beach might lead to the closure of the whole beach. (Wikipedia)