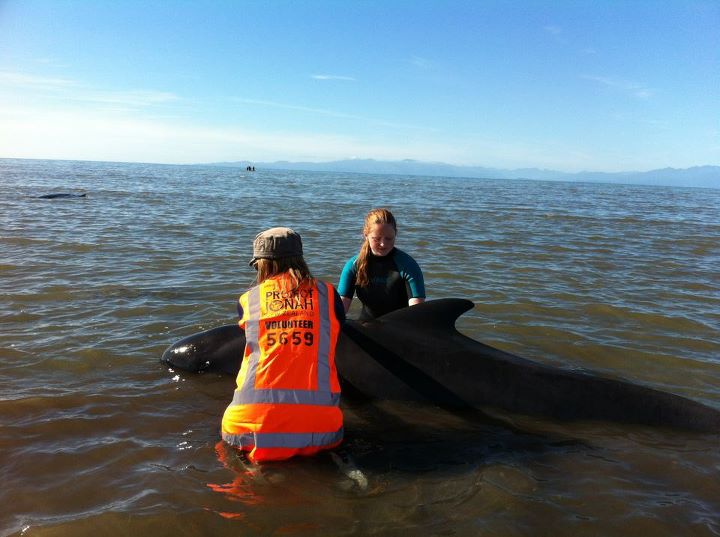 Project Jonah Marine Mammal Medics in the Golden Bay and Nelson areas have been called yesterday to give immediate first aid to estimated 90 whales that were seen milling close to the shore and have grounded on a receding tide, Project Jonah CEO Kimberly Muncaster said yesterday. “It’s tragic to see another stranding so close to the last one on Farewell Spit, but we’ll be doing  our best to save as many of these whales as we can”, she said.

Yesterday’s stranding happened seven kilometres along Farewell Spit, and just two kilometres from the mass stranding many of our medics attended earlier this month in which 25 whales beached.

Of the 99 that stranded around yesterday afternoon, 22 have died. Department of Conservation staff, Project Jonah medics and members of the public have worked hard through the afternoon to give the remaining 77 the best chance of surviving the night.

Lack of light and a quickly moving tide meant volunteers had to abandon the whales, hoping some would refloat themselves on the high tide and others would survive until morning without volunteers there to keep them alive.

“It has been an anxious wait,” Kimberly says. “Our medics arrived throughout the day yesterday from as far away as Invercargill, Auckland and Australia. All they could do overnight was camp out and wait, hoping the morning would bring a pleasant surprise rather than further tragedy.”

But, despite the heroic efforts volunteers at Farewell Spit, the 39 whales that were refloated on Tuesday night high tide have restranded by afternoon.  The tide dropped very quickly and although there was a huge effort from volunteers to stop the animals restranding, they grounded again. “The remaining live whales scattered a bit overnight, but they are still in the same general location,” Kimberly said.  “We’ll be desperately trying to keep them alive until nightfall and we hope they may refloat themselves at high tide.”

Tragic as it may seem, this kind of restranding is not unusual for Golden Bay with its fast receding and incoming tides. Although the animals were refloated they didn’t move quickly enough in the right direction and got caught on the sand as many have before them.

On a happier note, the pod of about 17 whales that refloated themselves continue to make their way out of the bay and were last reported to be swimming strongly with about 28 metres of water beneath them. 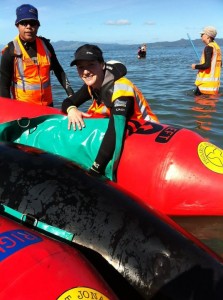 Project Jonah is a New Zealand registered charity. We exist for one simple reason – marine mammals desperately need our help. Our vision is to create a world where these animals are respected and protected. And to achieve this we need your support.

Our strength comes from our volunteers; everyday Kiwis that give up their time to help marine mammals through our rescue, action and protection programs. Whether they’re picking up litter on beaches or getting hands on in rescuing stranded whales, they’re out there helping. Whatever the weather.

We’re a New Zealand organisation, with a distinct flavour and feel. We pride ourselves on being passionate, honest, open and down to earth – things that Kiwis are well known for, both here and overseas.

Visit their site for more information, help and donation.