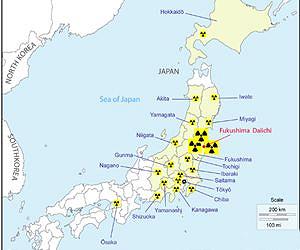 French nuclear monitor said that the amount of caesium 137 that leaked into the Pacific from the Fukushima disaster was the greatest single nuclear contamination of the sea ever seen. But, confirming previous assessments, it said caesium levels had been hugely diluted by ocean currents and, except for near-shore species, posed no discernible threat.

From March 21 to mid-July, 27.1 peta becquerels of caesium 137 entered the sea, the Institute for Radiological Protection and Nuclear Safety (IRSN) said. One peta becquerel is a million billion bequerels, or 10 to the power of 15. Of the total, 82 percent entered the sea before April 8, through water that was pumped into the Fukushima’s damaged reactor units in a bid to cool them down, it said.

“This is the biggest single outflow of man-made radionuclides to the marine environment ever observed,” the agency said in a press release.

Caesium is a slow-decaying element, taking 30 years to lose half of its radioactivity. The IRSN said large quantities of iodine 131 also entered the sea as a result of the disaster, caused by the March 11 9.0-magnitude quake that occurred off northeastern Japan. But iodine 131 decays quickly, having a half-life of eight days, and the contamination swiftly diminished.

The IRSN said that, for the Pacific generally, caesium levels would ultimately stabilise at 0.004 becquerels per litre thanks to the diluting effect of powerful ocean currents. This is twice the concentration that prevailed during atmospheric nuclear testing in the 1960s.

Significant pollution of seawater on the coast near the damaged plant could persist, because of continuing runoff of contaminated rainwater from the land. Maintaining monitoring of marine species taken in Fukushima’s coastal waters is justified.

The IRSN cited deep-water fish, fish at the top of the marine food chain and molluscs and other filtrating organisms as “the species that are the most sensitive” to caesium pollution. (TerraDaily)