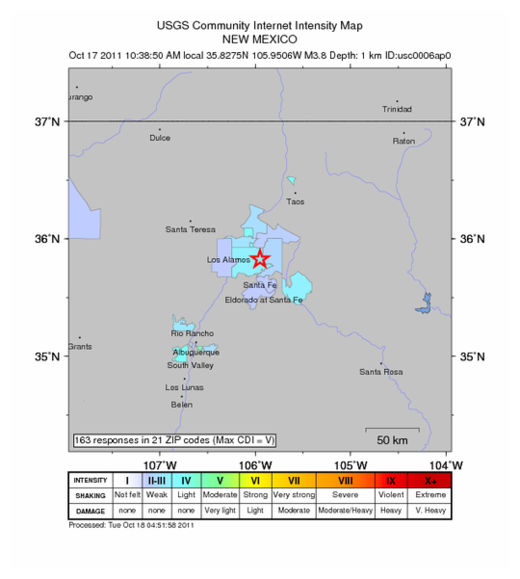 The U.S. Geological Survey is confirming that an earthquake happened at 10:38 a.m. Monday, Oct 17, in Santa Fe, Northern New Mexico. The center of the 3.8 magnitude earthquake was 9 miles north of Santa Fe, two miles west of Chupadero, four miles southeast of Cuyamungue and 62 miles northeast of Albuquerque with depth of around 0.7 miles.

A 3.8 magnitude earthquake “is unusual for this area, historically,” Richard Aster, a professor of Geophysics at New Mexico Institute of Mining and Technology, wrote the New Mexican in an email Monday. 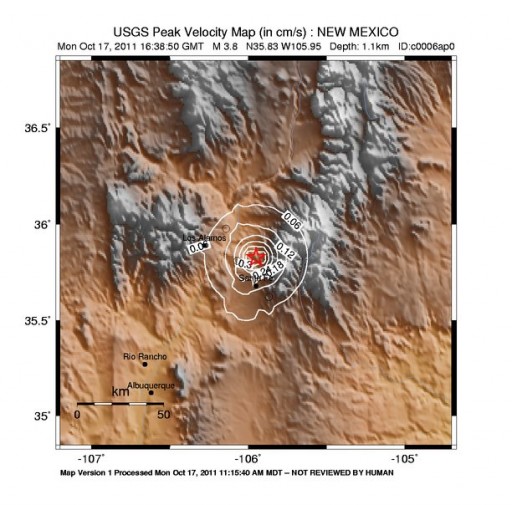 This is a large enough event that there may be felt aftershocks.” Monday’s temblor, at 3.8, is small compared to the earth-moving quakes recorded in Japan, California or other hot zones. But in New Mexico, 3.8 is a major event. There were the two earthquakes around Socorro in 1906, including one in November of that year that shook four chimneys and plaster off the Socorro County Courthouse and a cornice fell on the northwest corner of the two-story adobe Masonic Temple was thrown onto its first floor.More recently, there was a 5.0 quake 25 miles west of Raton and a 4.2 magnitude temblor on Dec. 19, 2005 near Carlsbad, according to the U.S. Geological Survey. It appears the largest quake was a 5.1 trembler near Dulce in 1966.

Elvira Garcia and Becky Romero of Nambe knew as soon as they heard their dishes and glasses tinkle and windows rattle Monday morning, they were experiencing something new. 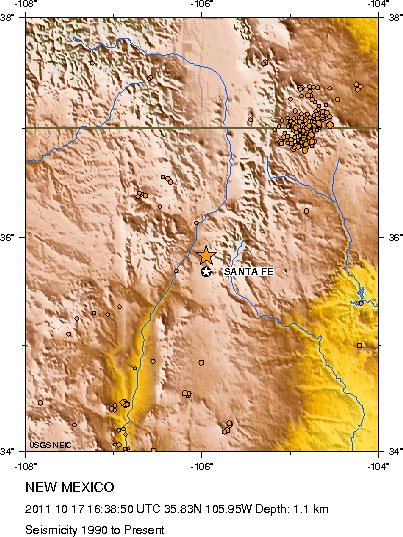 “We hear experimental explosions from the lab,” Romero said of the Los Alamos National Laboratory. “We hear sonic booms and crashes on (State Route) 503. But this was totally different. When things started shaking, that really frightened me. I could hear the dishes and glasses tinkling.”

Garcia heard the rumble while she was on the telephone with her sister. “The cat ran across from one room to the other,” Garcia recalled late Monday morning.

The shaking knocked a photograph and several knickknacks off shelves along with rattling her nerves. “I’ve been through the big floods in the arroyos with the pigs rolling down,” Garcia said.

Searching for an analogy, Garcia turned to Hollywood and the 1990 film Tremors, which featured gargantuan earth-burrowing creatures that shook the ground before they popped up out of the earth.

“I expected one of those things to come up,” Garcia said. 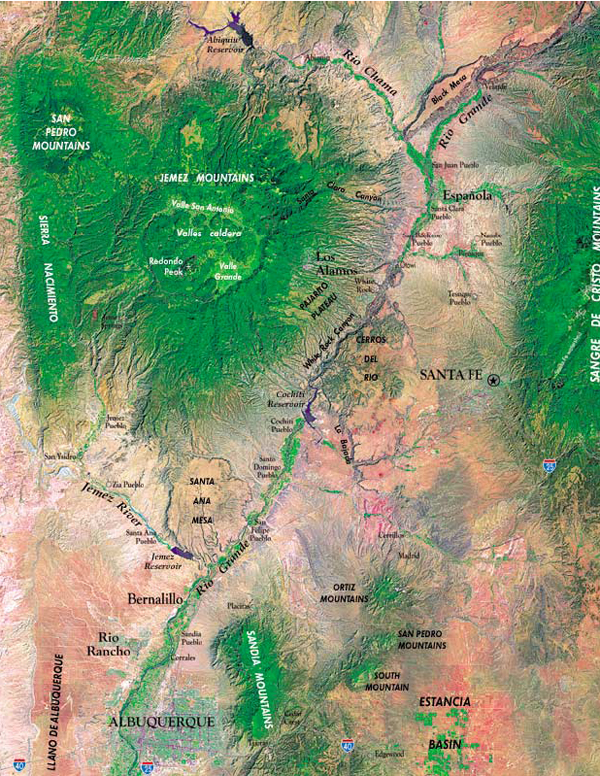