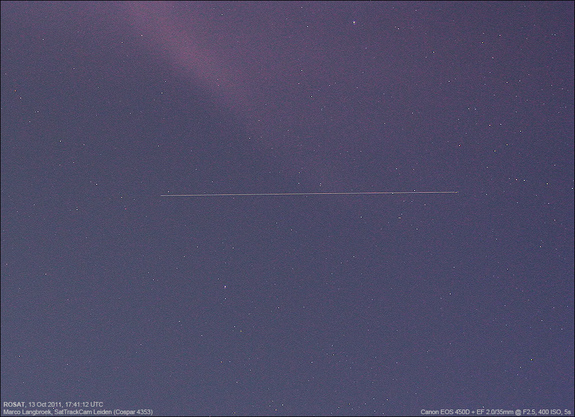 The massive ROSAT X-ray space telescope continues to descend toward Earth. Latest estimates place the re-entry around noon Universal Time on Oct. 23rd. Uncertainties exceed 10 hours, which makes it impossible to say exactly where ROSAT will re-enter. Many sky watchers are seeing ROSAT in the night sky shining about as brightly as a 1st magnitude star. (SpaceWeather)

The ROSAT system of mirrors comprises four nesting Wolter mirrors with a focal length of 2.4 meters. Each of the ring-shaped mirrors measures 50 centimeters in length, and the largest has a diameter of 84 centimeters. The mirrors, manufactured by Carl Zeiss, possess the smoothest mirror surfaces ever produced. 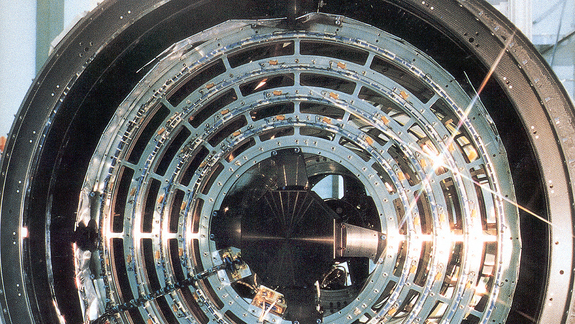 Where to watch for ROSAT?

With a magnitude of +1 (about as bright as the brightest stars in the sky such as Deneb and Arcturus, and brighter than the Big Dipper stars) it is easily visible to the naked eye even in deep twilight. You have to keep a close watch on the relevant parts of the sky though, as it is gone again before you know it. The satellite has to pass over your locality in twilight in order to see it.  The satellite is at its brightest when right above you and while descending to the eastern horizon (as it then is “opposite” the sun and almost fully illuminated). So observers should look for it right above them and/or eastwards in the sky, not west, during a pass.  Around October 20th, very close to decay, the US east coast will get good twilight passes. (Space.com)