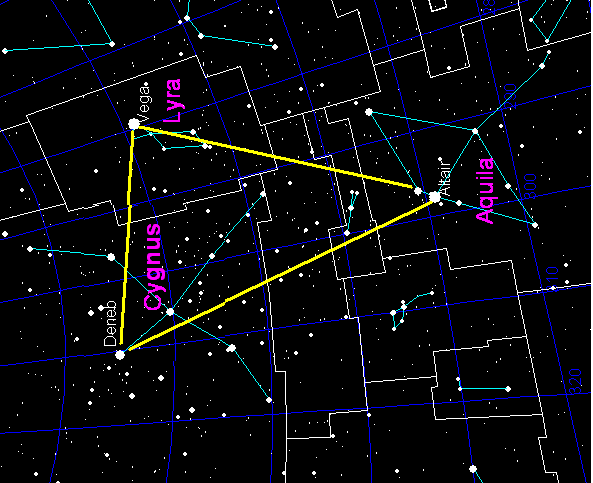 During the summer sky watchers in the Northern Hemisphere can observe the famous "Summer Triangle" which form stars Vega, Altair an Deneb. Actually, the triangle can be seen from the mid-northern latitudes throughout the year, but it is especially visible during the summer season.

As for their luminosity astronomers know Vega is without a doubt more luminous than Altair, even though it is 25 light years away from Earth, 8 more than Altair.

This means that the light we see from Vega began its journey to our planet in the year 1988, while the light from Altair "departed" in 1996.

Deneb is a huge, supergiant star that is 1500 light years away from our planet and more than 85000 times more luminous than the Sun.

The name Altair has been used since medieval times. It is an abbreviation of the Arabic phrase النسر الطائر, an-nasr aṭ-ṭā’ir (English: The flying eagle). The term Al Nesr Al Tair appeared in Al Achsasi Al Mouakket catalogue, which was translated into Latin as Vultur Volans. This name was applied by the Arabs to the asterism of α, β, and γ Aquilae and probably goes back to the ancient Babylonians and Sumerians, who called α Aquilae the eagle star. The spelling Atair has also been used.

Wega (later Vega) comes from a loose transliteration of the Arabic word wāqi‘ meaning "falling" or "landing", via the phrase an-nasr al-wāqi‘, "the falling eagle". The term "Al Nesr al Waki" appeared in the Al Achsasi Al Mouakket star catalogue and was translated into Latin as Vultur Cadens, "the falling eagle/vulture". The constellation was represented as a vulture in ancient Egypt, and as an eagle or vulture in ancient India. The Arabic name then appeared in the western world in the Alfonsine Tables, which were drawn up between 1215 and 1270 by order of Alfonso X.

Medieval astrolabes of England and Western Europe depicted Altair and Vega as birds.

To observe the Summer Triangle, as the night falls, locate the brightest star in the eastern sky. When you have found Vega, to the lower left of Vega you can locate Deneb, and to the lower right is Altair.