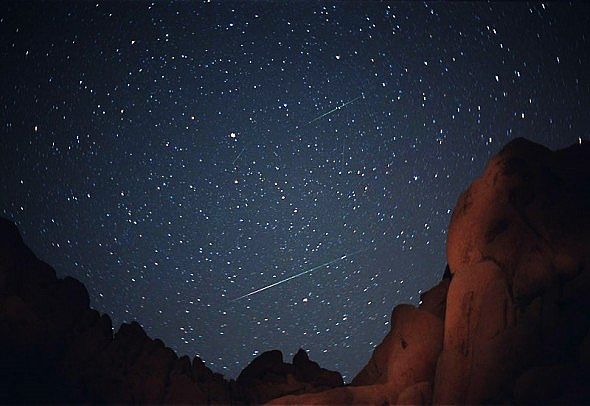 Every year in late April Earth passes through the dusty tail of Comet Thatcher (C/1861 G1), and the encounter causes a meteor shower–the Lyrids. This year the shower peaks on Friday morning, April 22nd. The best time to look, no matter where you live, is during the hours before dawn. Forecasters expect 10 to 20 meteors per hour visible from dark-sky sites.

Lyrid meteors appear to stream from the bright star Vega in the constellation Lyra:

In fact, Lyrids have nothing to do with Vega. The true source of the shower is Comet Thatcher. Every year in April, Earth plows through Thatcher’s drawn-out dusty tail. Flakes of comet dust, most no bigger than grains of sand, strike Earth’s atmosphere traveling 49 km/s (110,000 mph) and disintegrate as streaks of light–meteors!

Lyrid meteors are typically as bright as the stars in the Big Dipper, which is to say of middling brightness. But some are more intense, even brighter than Venus. These “Lyrid fireballs” cast shadows for a split second and leave behind smokey debris trails that linger for minutes.

Occasionally, the shower intensifies. Most years in April there are no more than 5 to 20 meteors per hour during the shower’s peak. But sometimes, when Earth glides through an unusually dense clump of comet debris, the rate increases. Sky watchers in 1982, for instance, counted 90 Lyrids per hour. An even more impressive outburst was documented in 1803 by a journalist in Richmond, Virginia, who wrote:

What will the Lyrids do this year? The only way to know for sure is to go outside and look. 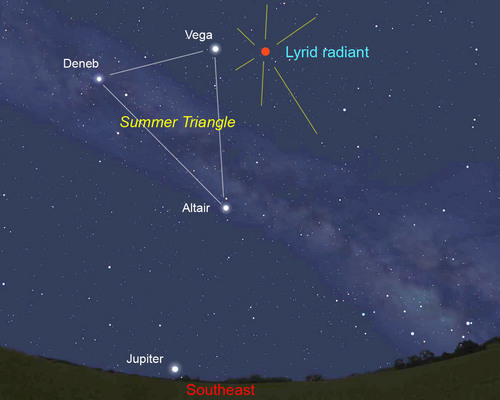 Experienced meteor watchers suggest the following viewing strategy: Dress warmly. Bring a reclining chair, or spread a thick blanket over a flat spot of ground. Lie down and look up somewhat toward the east. Meteors can appear in any part of the sky, although their trails will tend to point back toward the radiant–i.e., toward Vega.

Vega is a brilliant blue-white star about three times wider than our Sun and 25 light years away. About 14,000 years ago Vega was the North Star. Earth’s spin axis wanders: Now it points at Polaris, then it pointed at Vega. You might have seen Vega in Carl Sagan’s movie Contact. It was the source of alien radio transmissions to Earth. (SpaceWeather)

Set your alarm for some crazy good astronomy (AstroBob)

The Lyrids have been linked to Comet Thatcher, C/1861 G1. This comet was discovered on April 5th, 1861, by A.E. Thatcher of New York at a magnitude of 7.5 in the constellation of Draco, and according to Kronk, was described as “a tailless nebulosity 2 arcmin in diameter with a central condensation.” The orbit of this parent comet was determined to be elliptical, with a period of about 415 years.

The history of the Lyrid meteor shower can be traced back through historical records to 687 B.C. It is the oldest shower to be mentioned in ancient records. Outbursts, when there are much higher rates, have been seen in a
number of years including, in recent times, 1803, 1922, and 1982. Lovell, in his writings, states that the many centuries the shower has been active is “no doubt due to the high inclination (80 degrees) of the orbit which makes planetary perturbations improbable.” It is interesting to read about recent attempts to determine the periodicity of the meteor stream. The orbit determination relies heavily on photographic and radar results, which are seldom obtainable every year – hence gaps in the data and our knowledge of the shower. Studies of the years with higher Lyrid activity have found however, that outbursts of fainter meteors occurred prior to the normal meteor maximum.

The historical references to the Lyrids are interesting to read. A newspaper in Richmond, Virginia on April 23rd, 1803, described the shower as follows: “Shooting stars. This electrical phenomenon was observed at Richmond and its vicinity, in a manner that alarmed many, and astonished every person that beheld it. From one until three in the morning, those starry meteors seemed to fall from every point in the heavens, in such numbers as to resemble a shower of sky rockets…” Another published report lists an observer as having “counted 167 meteors in about 15 minutes, and could not then number them all.” Observers should keep in mind that this shower is indeed capable of outbursts…

The Lyrids are the first main shower of spring. The moon is first quarter, and the nights should be a little warmer for North American observers. So, get out there observing – and clear skies to all! (ScienceNasa)