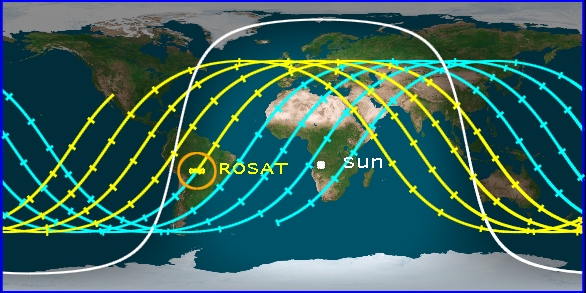 Another huge piece of space debris, a 2.6-ton, defunct German telescope called the Roentgen Satellite (ROSAT), will crash back to Earth Saturday or Sunday (Oct. 22 or 23), and the chances it will hit someone are even greater this time around. The odds are 1-in-2,000 that a chunk of ROSAT will strike a person. For the UARS satellite that fell into the southern Pacific Ocean in September, the odds were 1-in-3,200. According to Heiner Klinkrad, head of the European Space Agency’s Orbital Debris Office, ROSAT poses a higher risk than UARS because more of its mass is expected to survive atmospheric re-entry and reach Earth’s surface.

Typically, when a satellite crashes to Earth, only 20 to 40 percent of its mass survives; the rest burns up from heat generated by friction between the satellite and particles in the atmosphere, Klinkrad said. Because ROSAT’s mirrors – which collected X-rays and extreme ultraviolet light emitted by celestial objects – resist heat, they reduce the percentage of the spacecraft that will burn up, and over half of the spacecraft’s mass, about 1.7 tons of it, is expected to reach the surface.

According to scientists in NASA’s orbital debris office at Johnson Space Center in Houston, calculating the risk of space debris hitting someone requires first working out how much debris makes landfall. Analysts then make a grid of how the human population is distributed around the globe. Oceans, deserts and the North and South poles are largely devoid of people, for example, whereas coastlines are brimming with them. In short, the analysts must figure out which patches of Earth have people standing on them.

Throwing in a few more minor details, such as the latitudes over which satellites spend most of their time orbiting – ROSAT will most likely fall between 53 degrees north and 53 degrees south latitudes – the scientists calculate how likely it is that a piece of space junk will strike the ground where a person happens to be. This time around, the odds are 1-in-2,000, and there’s a one-in-several-trillion chance that not only will a person get hit, but that person will be you.

Two dead satellites have crashed to Earth in as many months, after years of gradually getting dragged down to lower and lower orbits. More will re-enter the atmosphere in the future. With this in mind, you may be interested to know the overall risk of getting struck in a given year, or in your lifetime.

The annual risk of a single person to be severely injured by a re-entering piece of space debris is about 1 in 100 billion.

In the course of a 75-year lifetime, then, the odds of getting injured by space junk would be a little less than 1 in 1 billion. If this sounds scary, it probably shouldn’t. By comparison, “the annual risk that a single person gets struck by a lightning is about a factor 60,000 higher, and the risk of a serious injury from a motor vehicle accident is about 27 million times higher than the risk associated with re-entry events.” (Space.com)

The doomed ROSAT X-ray space telescope continues to descend toward Earth. Multiple experts agree that re-entry should occur on Oct. 23rd, with most favoring the early hours of the day. Decay time uncertainties exceed 8 hours, so it is still impossible to say exactly where ROSAT will disintegrate. (SpaceWeather)

Sky watchers say ROSAT is bright and easy to see, but photographers are having a hard time catching it. Until then, sky watchers should be alert for a fast-moving light in the night sky. To catch ROSAT, check Spaceweather’s Satellite Tracker for local flyby times. You can also turn your smartphone into a field-tested ROSAT tracker. 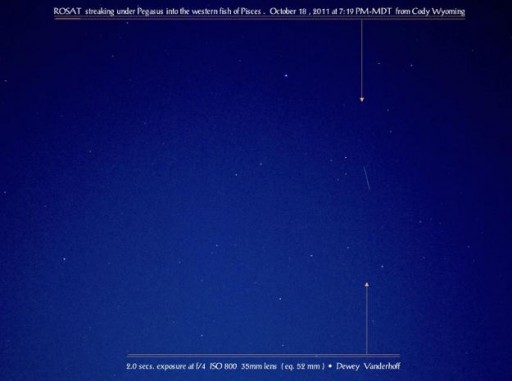 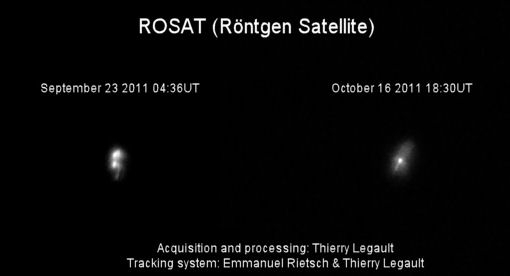 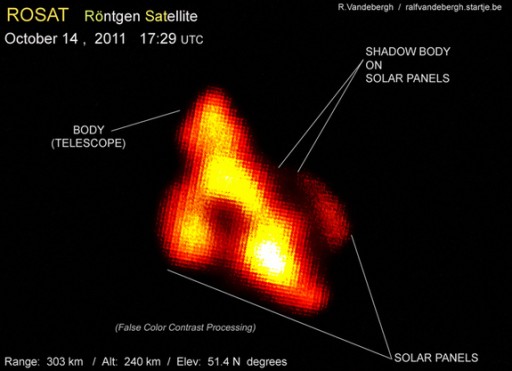 The orbit extends from 53 degrees northern and southern latitude, and all areas in that region could be affected by its re-entry. The bulk of the debris will impact near the ground track of the satellite, but larger parts of the satellite, including its 32 inch, 400 kg mirror, could fall to Earth in a 80-kilometer-wide path along the track. (UniverseToday)

The re-entry of the ROSAT satellite and the risks