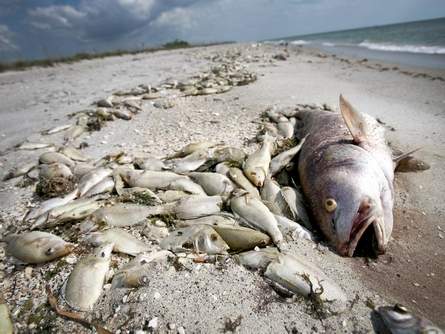 Thousands of dead fish have washed ashore on a small stretch of shore from Englewood Beach to Stump Pass due to a red tide bloom. Ocean currents are shifting again and most of the dead fish — along with the red tide bloom that killed them — will be heading away from Sarasota County.

A red tide bloom — caused by toxic algae — is lingering offshore from Englewood south to Sanibel Island. The bloom is forecast to move to the southeast over the weekend and could get pushed out to sea by Sunday or Monday, said Jason Lenes, a research associate with the Center for Prediction of Red Tides at the University of South Florida.

After a 5-year hiatus, red tide began to proliferate for the first time about three weeks ago off the coast of Manasota and Venice beaches. The bloom moved south to Lee County and then slightly north again this week. The bloom reportedly killed thousands of fish, most of which are floating offshore.

Karenia brevis, the algae that causes red tide, produces a powerful fish-killing toxin that also makes people on the beach cough and wheeze. When winds are blowing onshore during a red tide bloom, people with respiratory illness, such as asthma, should avoid the beach.

Several residents in Englewood reported the fish kills to the state wildlife hot line on Friday. Among the dead species were pinfish, catfish, lady fish and red fish. (HeraldTribune)

Red tide is a common name for a phenomenon also known as an algal bloom (large concentrations of aquatic microorganisms), an event in which estuarine, marine, or fresh water algae accumulate rapidly in the water column and results in discoloration of the surface water. It is usually found in coastal areas.

These algae, known as phytoplankton, are single-celled protists, plant-like organisms that can form dense, visible patches near the water’s surface. Certain species of phytoplankton, dinoflagellates, contain photosynthetic pigments that vary in color from green to brown to red.

When the algae are present in high concentrations, the water appears to be discolored or murky, varying in color from purple to almost pink, normally being red or green. Not all algal blooms are dense enough to cause water discoloration, and not all discolored waters associated with algal blooms are red. Additionally, red tides are not typically associated with tidal movement of water, hence the preference among scientists to use the term algal bloom.

Some red tides are associated with the production of natural toxins, depletion of dissolved oxygen or other harmful effects, and are generally described as harmful algal blooms. The most conspicuous effects of these kind of red tides are the associated wildlife mortalities of marine and coastal species of fish, birds, marine mammals, and other organisms. In the case of Florida red tides, these mortalities are caused by exposure to a potent neurotoxin called brevetoxin which is produced naturally by the marine algae Karenia brevis. (Wikipedia)