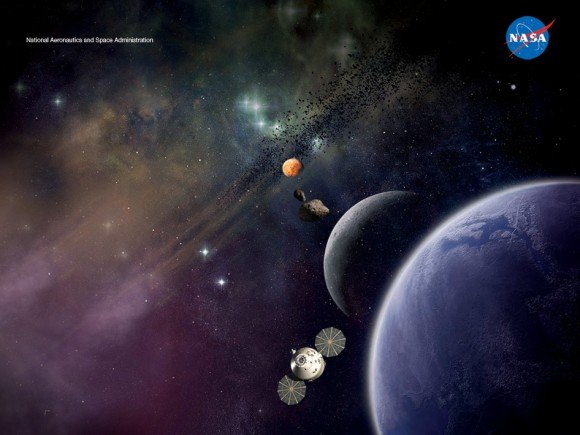 With NASA’s announcement of its new, mammoth Space Launch System (SLS), preparations can begin in earnest for the first human mission to an asteroid. The SLS will take the Orion Multipurpose Crew Vehicle (MPCV) on the first human forays into deep space, out of the Earth/Moon system.

Lockheed Martin has been working on the Orion MPCV, which was originally part of the Constellation program to return to the Moon. But NASA has now been given a presidential directive to land astronauts on an asteroid by 2025, a mission that some say represents the most ambitious and audacious plan yet for the space agency. Orion is now being re-worked and updated for “stepping stone” missions that will take humans to possible destinations such as lunar orbit, the Lagrange points, asteroids, and potentially the moons of Mars. The ultimate destination in this path is to send humans to the Red Planet. 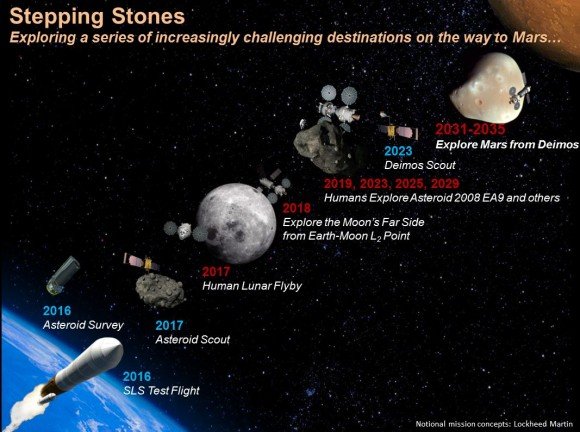 Billed as the biggest rocket ever built, the first incarnation of NASA’s SLS heavy-lift booster — which was unveiled on Sept. 14, 2011 – will stand over 30 stories tall, have a mass of 2.5 million kg (5.5 million pounds) and use a liquid hydrogen and liquid oxygen propulsion system, with 5 space shuttle main engines and an improved J-2X engine for the upper stage. The SLS will have an initial lift capacity of 70 metric tons (mT), or about 69,853 kg (154,000 pounds) of payload into low Earth orbit. For reference, that’s more than double the lift capacity of any current launch vehicle, and it is estimated to be able to generate 10% more thrust than the Saturn 5 rockets produced at liftoff, the launchers that sent the Apollo missions to the Moon.

To send the Orion and a service module out into space, the SLS would add two more RD-25D/E engines on the first stage, and the “evolved” architecture would be able to lift 130 metric tons, or 129,727 kg (286,000 pounds) of mass to low Earth orbit. This would increase the mass of the stack to 2.6 million kg (6.5 million pounds) and it would stand as tall as a 40-story building. This configuration would enable thrust of 4.2 million kg (9.2 million pounds), 20% more than the Saturn 5. But Lockheed Martin is still in the initial stages of learning about the capabilities and timelines of the new launch system so they can produce the best version of Orion to pair with the SLS.

There are several differences between SLS and Constellation, with SLS having potentially a liquid booster with solid strap-ons instead of a solid first stage.  In factoring the capability of how much mass the SLS can launch to deep space, Lockheed Martin can now work on how they would manifest the various parts of the mission. 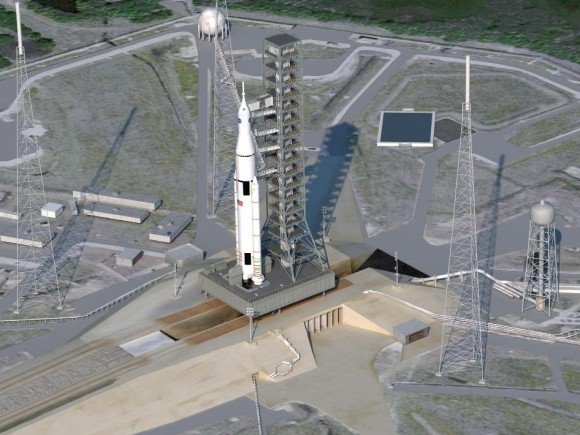 If the two are launched separately, then you’d have to allocate a few days in orbit to have the two hook up, or one scrubbed launch could ruin the attempt. So those are the top level kinds of things we are looking forward to finding out from NASA. At the detailed level, we’re working on things like what the flight environments will be like, how much load will the spacecraft see. What we’ve inferred from the studies we’ve been doing is that we think that Orion is already designed to a pretty rigorous set of acoustics, dynamic pressure and G-loads during ascent.

Lockheed Martin is targeting late 2013 or early 2014 for their first flight test of the Orion MPCV and they have reserved a Delta 4 Heavy for an unpiloted launch from Kennedy Space Center, but they are still evaluating what launcher would be best. As far as actually sending humans to an asteroid, there are many details to be worked out, and NASA and Lockheed Martin must allow for all the unknowns of flying humans in deep space, including a very important one of making sure humans can endure the radiation environment in space.

Redundant systems for keeping humans safe are an integral part of Orion’s design, but NASA might also first send a robotic scout mission to visit an asteroid. There’s much to be worked out to actually send humans to an asteroid. But one initial item of importance is knowing the timing of when SLS will be ready to do a human deep space mission, as that would determine what asteroids we’d be able to go to.

And finding an asteroid that is just right is going to be a challenge, too. We’ll discuss that in the next in our series of articles on a human asteroid mission. (UniverseToday)