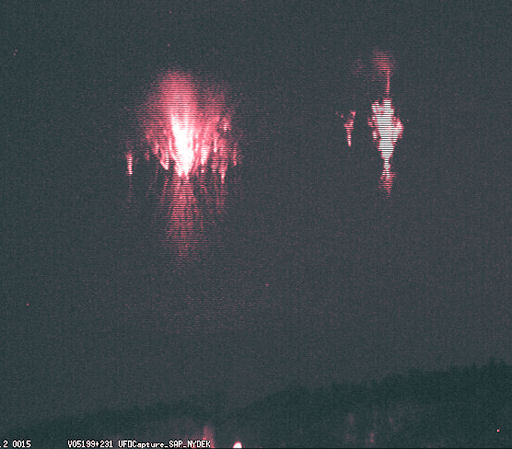 High above Earth in the realm of meteors and noctilucent clouds, a strange and beautiful form of lightning dances at the edge of space. Researchers call the bolts "sprites"; they are red, fleeting, and tend to come in bunches. Martin Popek of Nýdek in the Czech republic photographed these specimens on August 27th:

"Sprites develop in mid-air around 80 km altitude, growing in both directions, first down, then up. This happens when a fierce lightning bolt draws lots of charge from a cloud near Earth's surface. Electric fields 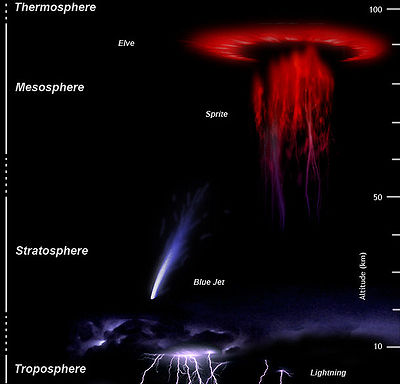 Sprites are large-scale electrical discharges which occur high above a thunderstorm cloud, or cumulonimbus, giving rise to a quite varied range of visual shapes. They are triggered by the discharges of positive lightning between the thundercloud and the ground. They normally are colored reddish-orange or greenish-blue, with hanging tendrils below and arcing branches above. They can also be preceded by a reddish halo. They often occur in clusters, lying 50 miles (80 km) to 90 miles (140 km) above the Earth's surface. Sprites were first photographed on July 6, 1989 by scientists from the University of Minnesota and have since been witnessed tens of thousands of times. Sprites have been held responsible for otherwise unexplained accidents involving high altitude vehicular operations above thunderstorms. (wiki)

If sprites are only barely detectable by the unaided human eye, in intensified television images obtained from the ground and from aircraft they appear as dazzlingly complex structures that assume a variety of forms. (http://elf.gi.alaska.edu/)