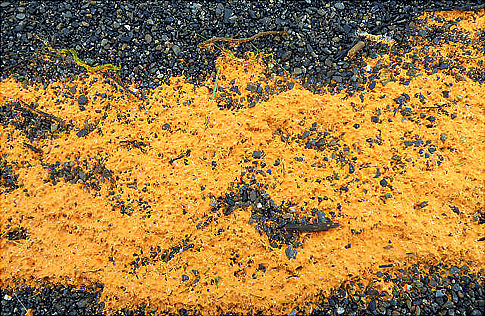 A massive patch of bright orange material washed up on the Alaskan coast, and has scientists baffled. The substance, which experts don’t believe is man-made, could possibly be algae, but a kind no one has seen before.

A strange orange substance raining down from the skies has left villagers in one of the world’s most remote areas mystified.  The alien invader was found in rain buckets in Kivalina, an Eskimo community in Alaska, and floating in the harbour, creating 100ft-by-10ft swathes of what one resident described as ‘bright neon orange’.

The news attracted all the townspeople, keen to get a glimpse of the phenomenon that covered much of the harbor and then began washing ashore on Wednesday. On Thursday it rained, and residents found the orange matter floating on top of the rain buckets they use to collect drinking water. It was also found on one roof, leading them to believe whatever it was, it was airborne, too. By Friday, the orange substance in the lagoon had dissipated or washed out to sea, and what was left on ground had dried to a powdery substance.

Residents, who have been left mystified by these events, have been advised to boil drinking water and to keep children away from the substance. The Coast Guard already has ruled out that the orange material, which some people described as having a semi-solid feel to it, was man-made or a petroleum product.

Village administrator Janet Mitchell has said that algae is the best guess. She voiced the main concern of the villagers, which is that the substance might be harmful: ‘What will it do to fish, which villagers will soon start catching to stock up for winter, or the caribou currently being hunted, or the berries? We rely 100 percent on subsistence.‘ 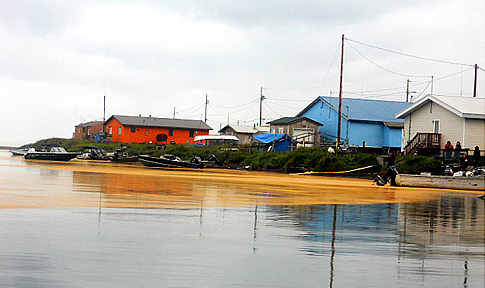 A further complication is that reserves are running low in the city’s two water tanks. The tanks need to be filled this summer from the Wulik River to make it through the winter. Pumping cannot resume until the orange substance has been identified.

Portions of the samples will also be sent to the University of Alaska Fairbanks and to a National Oceanic and Atmospheric Administration lab in South Carolina for testing.

Swan helped collect some samples for testing, and grabbed some of the substance in his gloved hand.

‘It was really light, with a powdery look to it, and it was just floating on there, all bunched up together,‘ 63-year-old Kivalina resident Austin Swan said. ‘It looked like it could blow away very easily.’ Swan added that some of the material had an oil-like sheen to it.

The orange material was also found some two miles away at a pumping station on the Wulik River. There was also a report some 150 miles away that the Buckland River was not its normal color, and had an orange color to the water. Since the substance was unknown, city officials cautioned residents to keep children away from the orange goo and for residents to boil their water before drinking it. (DailyMail) 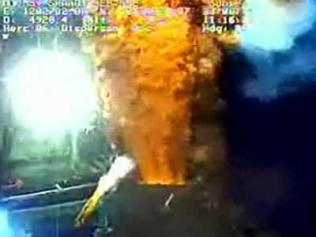