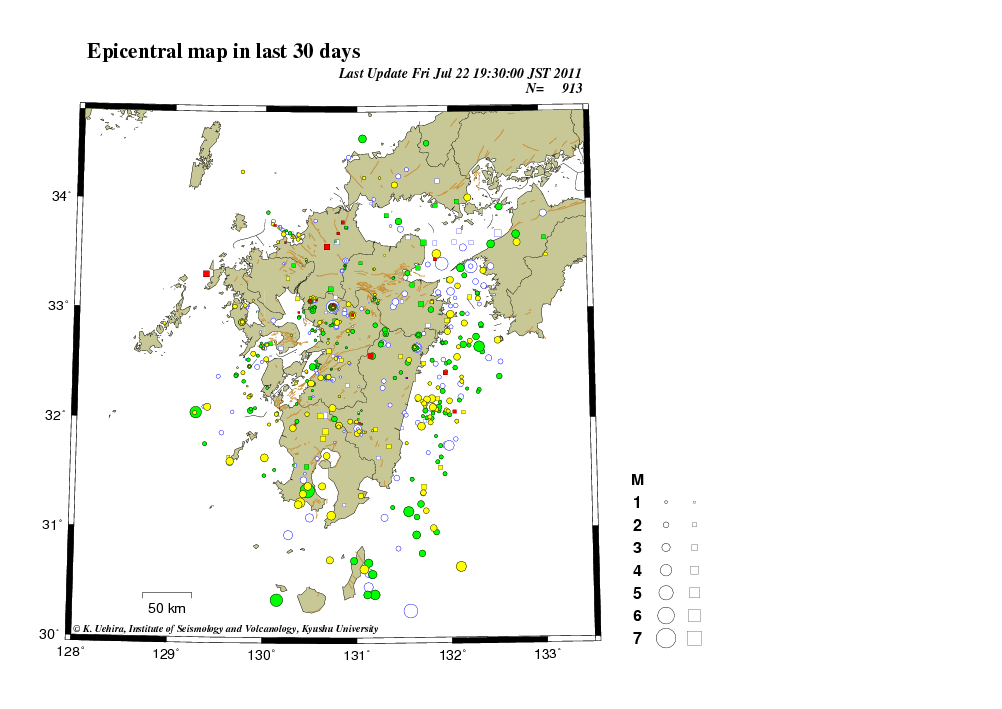 Strong activity is seen again at Showa crater on Sakurajima volcano. People reporting a few big explosions. For now there is no further information but we bring you a few webcams and earthquake reports from Japan Meteorological Agency. 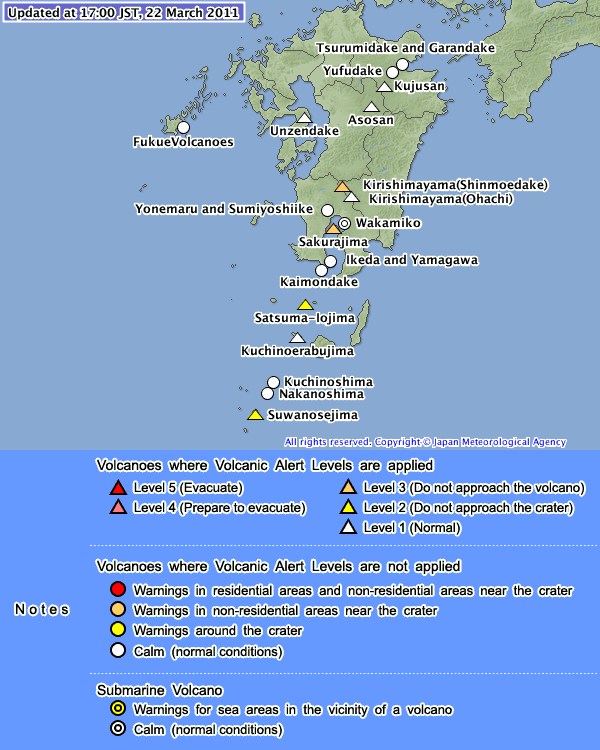 Sakurajima volcano is a geologically young stratovolcano consisting of two N-S aligned and adjoining edifaces, Kita-dake (1117 m) and Minami-dake (1040 m). Naka-dake (1069 m) is a lateral vent of Minami-dake and lies between the two main edifaces. Construction of the volcano is thought to have begun about 13,000 years ago at the southern perimeter of the Aira Caldera which formed as a result of a massive eruption approximately 22,000 years ago. “Old Kita-dake” was active shortly after the Aira Caldera eruption, becoming inactive about 20,000 years ago (Okuno et al. 1997. Nucl. Instr. Meth. Phys. Res. B 123, p.470-474). This was followed by the “Young Kita-dake” stage which involved several eruptions over the period from about 11,500 before present (BP) to 3500 BP. Since then, Kita-dake summit crater has been inactive, and numerous eruptions resulting in the construction of the Minami-dake ediface which partly overlies the south flank of Kita-dake. Historical activity has all been focussed at Minami-dake or vents on the flanks of both edifaces. (PhotoVolcanica) 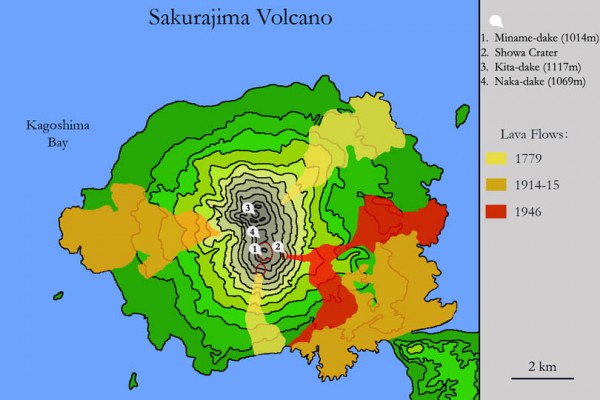 Sakurajima volcano has frequently produced eruption plumes with significant visible electrical discharges (volcanic lightning). This poses an additional danger to those closely approaching the vent. The distribution of electrical charges in volcanic plumes has been studied in detail at Sakurajima and compared to data collected at other volcanoes (Miura et al. 2002. Bull. Volc. 64, p.75-93). In general it was found that a typical volcanic plume consisted of an upper part rich in positively charged volcanic gases, a middle part with predominantly negatively charged fine ash, and a lower part rich in positively charged larger ash particles. This was designated the PNP model.

It is noted that during our observations, whilst activity appeared of similar magnitude, no lightning could be observed until the final 2 days of observation, when at least minor discharges accompanied almost every eruption (8,9 Jan). It seemed conceivable that atmospheric factors may influence the level of lightning activity. Also, most discharges were very short intracloud discharges, suggesting that even over short distances in the ash-cloud there are significant charge differences. 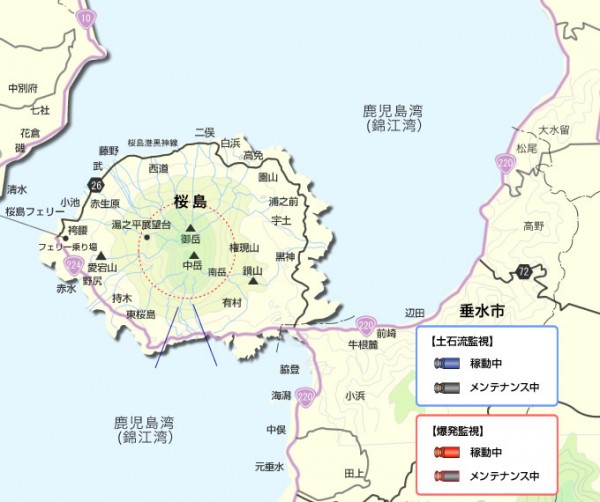 Major historical eruptions occurred in 1471-76, 1779, 1914-15, and 1946. Each of these emplaced large andesitic lava flows which modified the coastline of Sakurajima, indeed connecting the SE corner of the former island to the Oosumi Peninsula in 1914. To the west, still separated by about 4 km of water, lies the major city of Kagoshima, which frequently suffers from ashfall from the volcano.

Volcanism in the area can be attributed to the steep subduction of the Philippine Plate beneath the Eurasian plate. The frequently active Aso and Suwanosejima volcanoes are found about 200km to the north and south (in the Ryukyu Arc), respectively, and all are aligned approx. 120-250km from the plate boundary to their southeast. 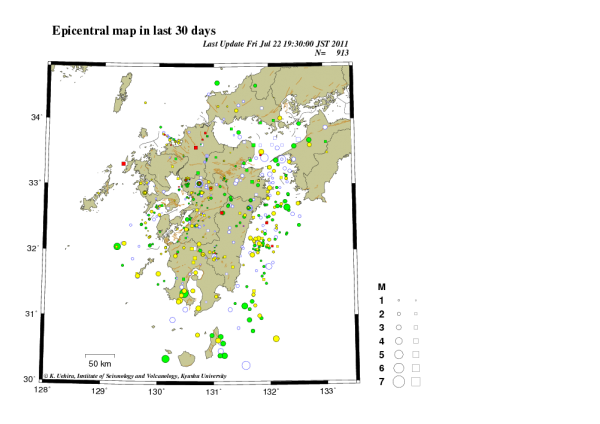 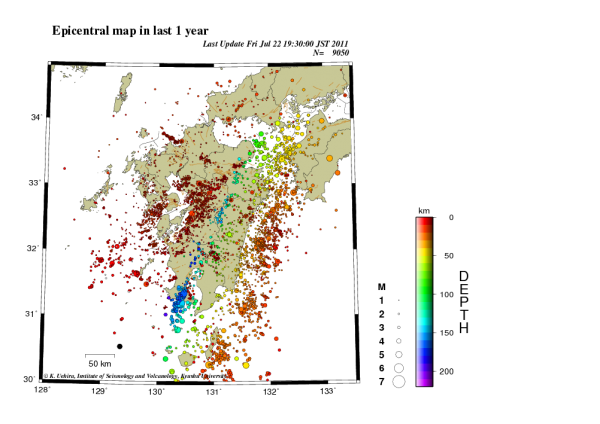