The sand along the south-western coastal rim of Norway has drifted for more than 9000 calendar years. This was triggered by sea-level changes and human activities, new research has found.

Researchers in countries such as Denmark, the Netherlands and Poland study sand drift, but most of them are focusing on sand dunes along the coastline, not on the plains further inland.

“Sand dunes are dynamic. For all we know, they may have been formed last year. But sand plaines are much older and in periods more stable. Thin organic layers present in sands are interesting, when trying to understand sand drift in pre-historic times,” says botanist Lisbeth Prøsch-Danielsen at the University of Stavanger’s Museum of Archaeology.

Together with her colleague, geologist Lotte Selsing, she studies the transportation of sand to the plains behind the sand dunes on the beaches along the coast of Jæren in the south-western part of Norway: Why and when it first occurred, and in which areas it is most prevalent.

Pre-historic sand drift Aeolian sand consists of particles, usually quartz, which has been transported by the wind. As a result of having collided with each other and thereby acquired a rounded shape, sand particles which have been shifted around by the wind over a long period of time, have a characteristically faint surface. Keeping the sand grains moving requires a certain wind force – around 12-15 metres per second. Such wind forces may occur at any time of the year in Jæren since deglaciation. 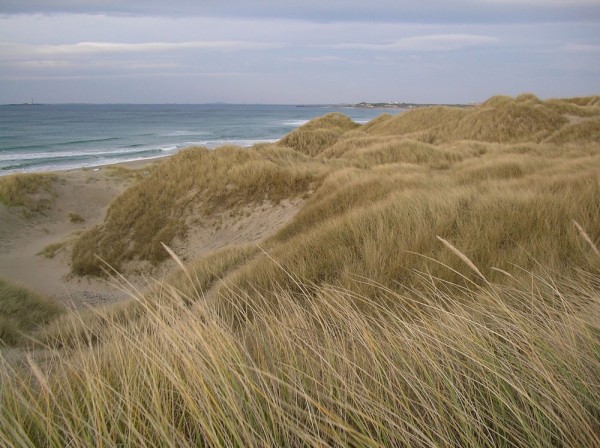 Several archaeological excavations have shown aeolian activities. They date back as far as 9000 calendar years. In some places, layers of aeolian sand are quite thick.

“When Stavanger Airport was extended during the 1980-ies, a large area was surveyed archeologically. The site was covered by as much as two metres of sand, which had simply levelled out the entire landscape,” says Selsing.

The coastal landscape in Jæren was fundamentally altered by sand drift, and the original topography obscured. Finding pre-historic settlements in areas covered by aeolian sand is thus very difficult. But this new research has enabled us to point out the location of cultural monuments more accurately. The findings indicate that the common occurrence of sand drift in Jæren may be attributed to sea-level changes, and human activities which have influenced the local environment and climate.

Between 7500 and 5500 years ago, the coast line was one kilometre farther inland from today. The big, shallow fiords and estuaries were filled with sand, deposited during sea-level changes. This sand, dating back to the Glacial and late Glacial times, is the origin of today’s beaches along Jæren. When the sea-level eventually, large areas of sand were exposed, and the wind could play around with the sediments again. For sand drift to occur, a number of factors have to be present. Sandy material has to be available, together with a lack of vegetation cover and a good measure of wind to transport the sand.

Near the Salthelleren prehistoric site in Ogna, there are traces of sand drift dating back approximately 7000 years -prior to any agricultural activities. Human activities tore away the vegetation cover, exposing soil to the wind and thereby reinforcing sand drift.

Early settlers began logging and burning the trees to provide pasture for animal husbandry – resulting in large moors, tended by grazing and slash-and-burn agriculture. In a span of 1500 years, the Jæren forests were completely gone. The coastal heaths were predominant until the Second World War, when modern agriculture finally gathered ground.

This human-made transition from forests to coastal heath land changed the local climate significantly, especially along the coast. There were no trees left to protect the soil from the strong winds coming in from the sea, and because of the wind’s cooling effect, temperatures felt lower. 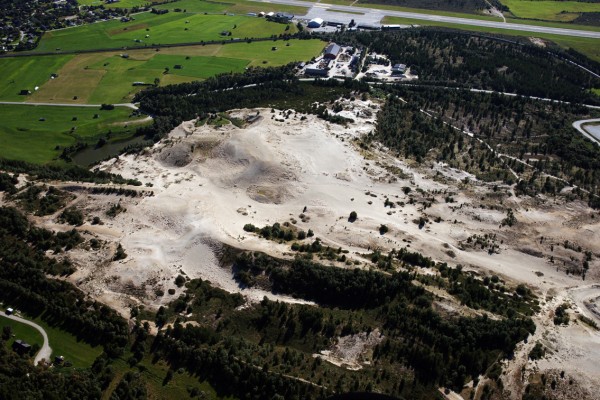 When agriculture was introduced in Rogaland 6000 years ago, the aeolian activity increased even further. Human settlements enforced environmental degradation by exposing the coastal landscape to erosion and desertification. As the first farmers ploughed their fields to sow barley and wheat, they tore up the soil and exposed the sand underneath, thereby sparking off sand drift. The scientists have uncovered plough marks in layers dating back to the Iron Age. There are also signs of farmers having been forced to move their pastoral fields as a result of sand destruction.

The impact of deforestation on the local climate and environment was severe. It is comparable to the situation we are facing today, the two scientists observe. But unlike pre-historic human-made environmental changes, modern interventions are more far-reaching and difficult to rectify. Sand drift and profound environmental changes to the Jæren landscape continued during the Middle Ages until today. There are local pockets of desertification, matched by few sites in Norway. One is Kvitsanden near Rørøs, which is the country’s only inland desert – and the result of logging to fire the former copper mining industry. (ScienceDaily)