On June 14th around 08:10 UTC, a magnetic filament near the sun's eastern limb became unstable and erupted. The resulting blast hurled a bright and massive CME into space.

The expanding cloud was observed by 3 spacecraft: STEREO-A, STEREO-B and SOHO. Researchers at the Goddard Space Flight Center's Space Weather Lab assembled data from the fleet to create a 3-dimensional model of the expanding cloud: movie. 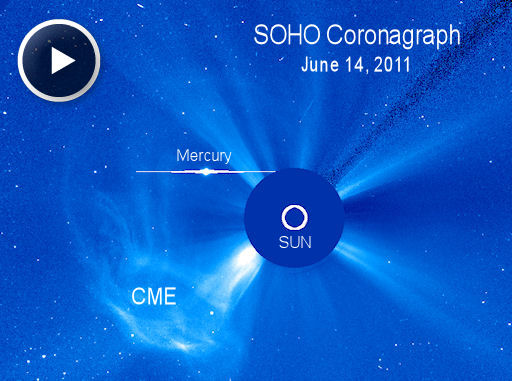 According to their analysis, the cloud blew away from the sun at a speed of 830 km/s and it could deliver a glancing blow to Earth's magnetic field on June 17th at 10:50 UT (plus minus 7 hours). The impact is not expected to provoke strong geomagnetic storming. Nevertheless, high-latitude sky watchers should be alert for auroras when the CME arrives. (SpaceWeather) 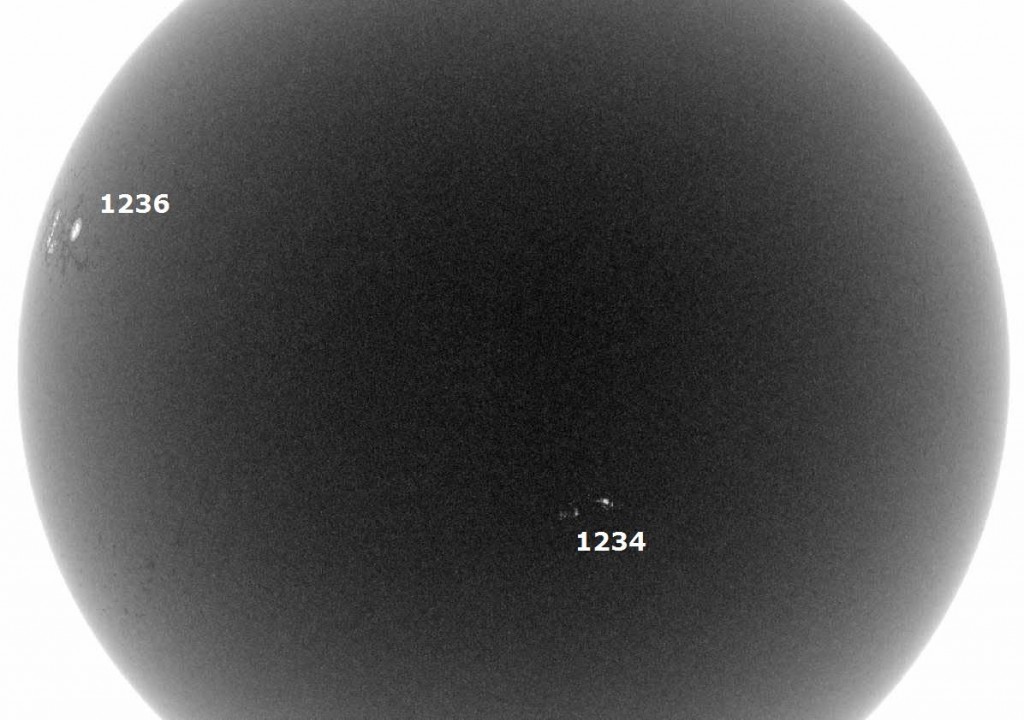 An M1.3 Solar Flare took place at 21:47 UTC Tuesday around Sunspot 1236 which is rotating into view on the eastern limb.

A large new sunspot now numbered 1236 is rotating into view on the eastern limb and is producing C-Class flares and has produced one M-Class flare. Stay tuned for further activity.

Existing sunspot 1234 which is located in the southern hemisphere continues to slowly re-expand. Sunspot 1235 in the north has faded once again.

Solar activity was at low levels during the period. New Region 1236 (N17E64) rotated onto the disk as a D-type spot group and produced two low-level C-class events. A north-south oriented filament channel, located near the SE limb, erupted during the period. SDO/AIA 193 imagery revealed material movement along the large channel, first visible at 14/0609Z, and movement continued through about 14/1500Z. Associated with the filament eruption was a partial halo CME off the east limb, first visible in STEREO-Behind COR2 imagery at 14/0810Z. A plane-of-sky velocity was estimated at about 750 km/s. This CME does not appear to be Earth-directed.

The geomagnetic field was at quiet to unsettled levels with an isolated active period observed between 14/0900 - 1200Z. This activity was due to continued effects from a recurrent coronal hole high speed stream. During the period, solar wind velocities rose steadily from near 450 km/s to about 550 km/s. The Bz component of the interplanetary magnetic field varied between +/- 8 nT while Bt varied between 5 and 10 nT. The greater than 10 MeV proton enhancement, present since 11 June, decayed to background levels early on 14 June.