Large swarms of locusts have laid waste to vast tracts of northwest China's Xinjiang Uygur Autonomous Region, with authorities expecting the plague to worsen as the weather heats up. The locust plague began in the pastureland of the Ili River Valley and Taer Basin in late April, said Wang Xinchang, an official with the animal husbandry bureau in Tacheng Prefecture, on Tuesday. 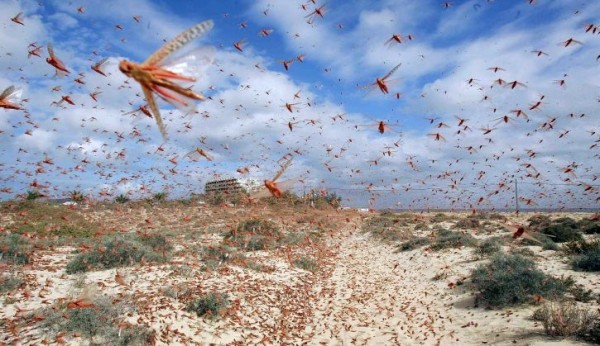 Locusts have infested nearly 100,000 hectares of pastureland in Tacheng Prefecture. As the summer heat persists, the situation might still worsen next month. At least 400,000 hectares of pastureland could become infested. Xinjiang's regional headquarters of locust and rodent control said an estimated 15.7 million hectares of pastureland would suffer from the locust plague this summer. The local governments in Ili and Tacheng have stepped up monitoring of the plague and have launched a pesticide spraying campaign to stop it spreading. Xinjiang has more than 100 kinds of locusts, one of the major menaces to the health of its grassland. It has a history of using chickens, ducks and other birds to fight the insects. (ChinaDaily)