A 6.1 magnitude earthquake has struck the Kermadec Islands just north of New Zealand. The quake struck at a depth of 19 km. Seismic tension and volcanic activity has been steadily increasing in the area since the 2010 Cantebury earthquake struck New Zealand. A intermittent string of quakes have also rippled across Australia. 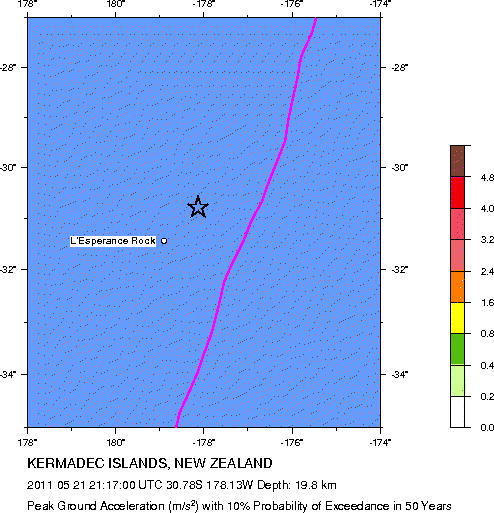 The Kermedec region includes outstanding examples of major stages in the geological evolution of the Earth. In geological terms, its value includes an entire cross section of the collision of two tectonic regions (the Pacific Plate and the Australian Plate), a large portion of the deepest sea-floor region in the southern hemisphere, and a major chunk of the longest submarine volcanic arc on the planet. 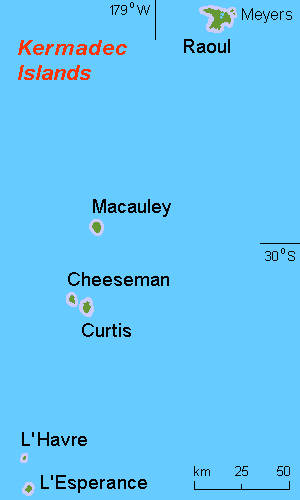 The volcanic islands of Raoul, Macauley, Curtis and L’Esperance are the emergent summits of large, complex stratovolcanoes that form part of a volcanic arc and subduction system extending from temperate New Zealand to tropical Tonga as part of the Pacific Ring of Fire.

The Kermadec Islands and associated submarine volcanoes along the Kermadec Arc are superlative natural phenomena. They display significant ongoing geological processes in the development of arc-styled volcanism, submarine hydrothermal venting and geomorphic features. In addition, the arc’s seamounts include a variety of volcanic landforms such as cones and calderas.

In recent years, six deep-sea expeditions have been undertaken to describe and survey the area in detail. Since 2002, several sea-floor geological voyages have mapped all the larger volcanoes of the Kermadec Arc from White Island in the Bay of Plenty to the Kermadec Island group (including the submarine flanks of Macauley and Raoul islands), and northward to southern Tonga. More than 50 new submarine volcanoes have been discovered in the past decade.

Many of the Kermadec submarine volcanoes are comparable in size and form to the more visible terrestrial New Zealand volcanoes, such as Mount Taranaki and Mount Ruapehu. At least eight of the Kermadec seamounts are over 2,000 m in elevation. One rises to within 65 m of the sea surface, while the summits of others reach no higher than 1,500 m below the surface. The largest volcano is 25 km in diameter, and at least 16 are more than 10 km in diameter. Macauley Island is part of a large volcanic complex at least 35 km in diameter. The island itself represents less than 5% of the emergent portion of the volcano, and the rim is capped by more than 30 vent cones that have emitted recent lava flows both into the caldera and down the outer-rim flanks.