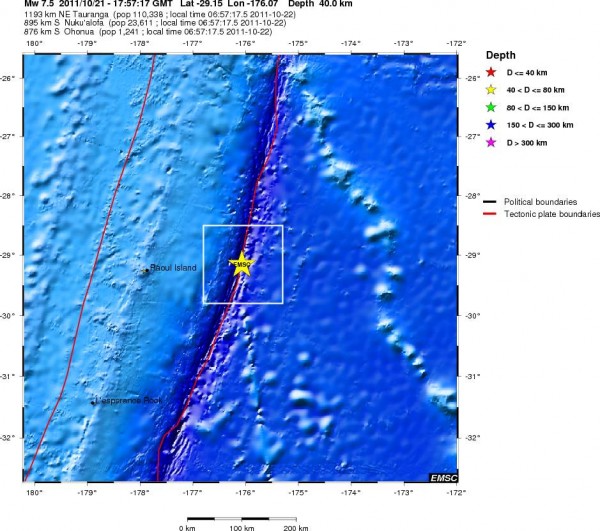 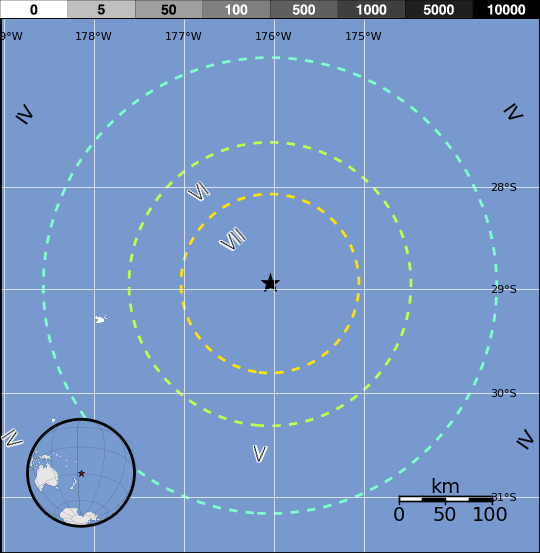 There were no reports or warnings about tsunami for now. On July 6 2011 an almost similar earthquake (M 7.6) also created a limited local tsunami without being dangerous for populated islands.

AN EARTHQUAKE HAS OCCURRED WITH THESE PRELIMINARY PARAMETERS

NO DESTRUCTIVE WIDESPREAD TSUNAMI THREAT EXISTS BASED ON
HISTORICAL EARTHQUAKE AND TSUNAMI DATA.

HOWEVER – EARTHQUAKES OF THIS SIZE SOMETIMES GENERATE LOCAL
TSUNAMIS THAT CAN BE DESTRUCTIVE ALONG COASTS LOCATED WITHIN
A HUNDRED KILOMETERS OF THE EARTHQUAKE EPICENTER. AUTHORITIES
IN THE REGION OF THE EPICENTER SHOULD BE AWARE OF THIS
POSSIBILITY AND TAKE APPROPRIATE ACTION. 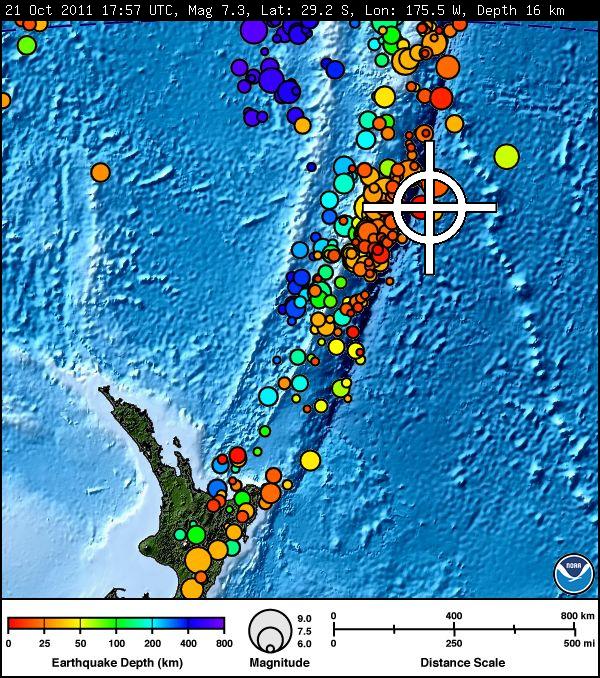 Swimmers, divers and recreational boat users are advised to be cautious as abnormally strong currents may be experienced in some locations in the north island of New Zealand.

The October 21, 2011 Kermadec Islands region earthquake occurred near the Kermadec Trench where the Pacific Plate begins its decent into the mantle beneath the eastern edge of the Australian Plate. At the latitude of this earthquake, the Pacific Plate is converging with Australia in a westward direction at a velocity of approximately 61 mm/yr. The preliminary mechanism and depth of the event suggest it ruptured a reverse fault within the oceanic lithosphere of the Pacific Plate; the initial location indicate a source slightly to the east of the trench, outboard (seaward) of the subduction zone itself, and thus not on the thrust interface between the Pacific and Australian plates.

The October 21 earthquake struck in an oceanic region with few nearby populations, approximately 500 km south of Tonga and 700 km north of New Zealand. This region of the Tonga-Kermadec subduction zone experiences reasonably high levels of seismic activity, with nearly 50 events of M 6.5 and above over the past 38 years, and 5 greater than M 7.5. Two of these, M 7.8 and M8.2 earthquakes on the same day in 1976, occurred just over 100 km west-northwest of todays event; an M7.8 event in 1978 struck nearly 250 km to the southwest, and an M 8.3 event occurred in October 1986, about 80 km to the north. None of these events have recorded damage or casualties.

In July of this year, a M 7.6 event occurred approximately 45 km to the south-southwest of the October 21 earthquake, breaking a normal fault within the subducting Pacific plate also very close to the Kermadec Trench. This event was notable because it triggered a large number of thrust-faulting aftershocks to the west of the plate boundary, on or close to the interface between the Pacific and Australian plates. The October 21 earthquake may be related to that aftershock sequence.