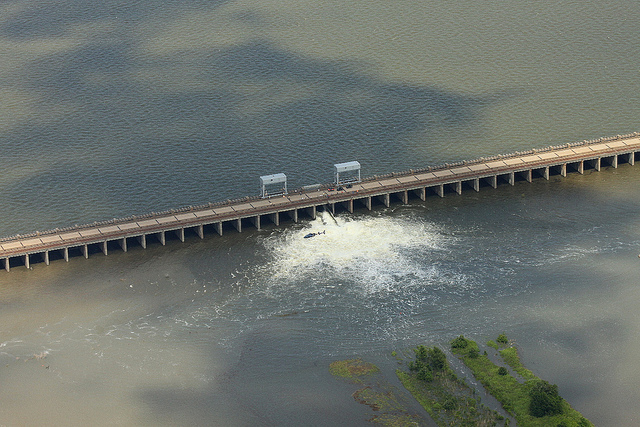 On May 14, 2011, the U.S. Army Corps of Engineers opened the Morganza Spillway in an attempt to ease flooding along the Mississippi River in Louisiana. The decision was made to protect the heavily populated areas and infrastructure around the ports of Baton Rouge and New Orleans. The decision is not without cost, however, to the thousands of people who are likely to lose homes and farms within the flood plain downstream.

On May 15, the Advanced Land Imager (ALI) on NASA’s Earth Observing-1 (EO-1) satellite captured this natural-color image (top) of the Morganza Floodway. The image was acquired at 11:20 a.m. Central Daylight Time, one day after the spillway was partially opened. The lower photo was taken on May 14 by the Army Corps, several hours after water began streaming onto the floodway. 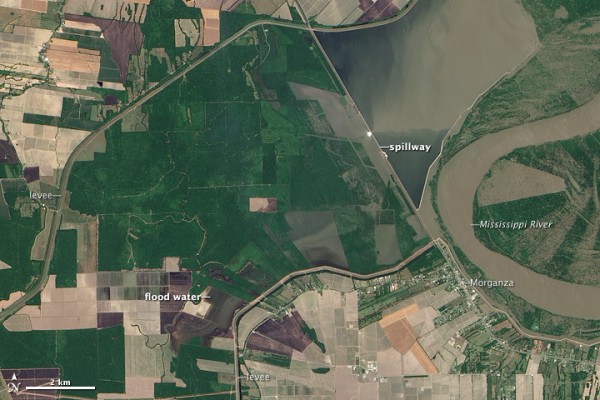 The flood control structure, or spillway, includes 125 gates, 11 of which had been opened as of noon on May 16. In the satellite image, the white pixels near the spillway are whitewater churned up by the flow through the gates; the downloadable large image shows this in much finer detail. Square and quadrilateral shapes on the landscape show areas that were cleared for farming or perhaps shaped for flood control earthworks. 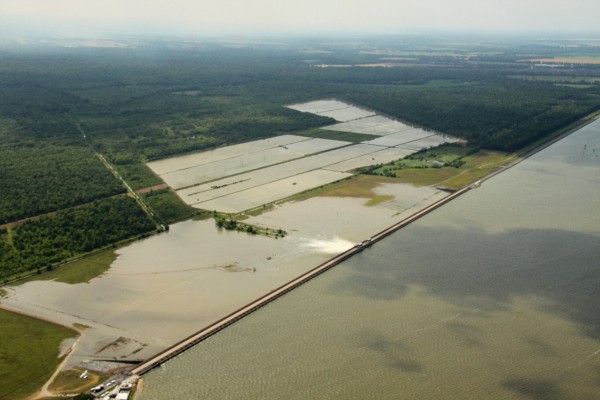 In the natural color satellite, water ranges in colors of olive, tan, black, and gray, reflecting the different loads of muddy sediment churned up from the bottom; darker areas might also reflect deeper water. Past the spillway, water is more readily apparent along the levee on the south and east side of the floodway, suggesting that there are fewer trees and perhaps lower elevations in those areas. Potential inundation maps (PDF) from the Army Corps appear to confirm that, as water levels are projected to rise to 10–15 feet (3–4.5 meters) in the southern and eastern areas and 5–10 feet (1.5–3 meters) in the northern and western areas in the image above.

Green areas do not necessarily mean a lack of water. As the aerial photo shows, much of the floodway is covered with trees that will shield the water below from the eyes of satellite sensors. Water is somewhat easier to spot in the near-infrared and shortwave infrared image linked below the top photo.

Video of the opening of the Morganza Floodway can be viewed online here. The floodway was last opened in 1973, the first and only time it was used before 2011. (EO)

Spring Floods in the U.S. Midwest and Canada Image Gallery