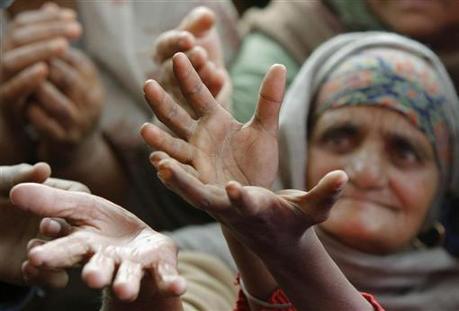 Driven in part by higher fuel costs connected to events in the Middle East and North Africa, global food prices are 36 percent above their levels a year ago and remain  volatile, pushing people deeper into poverty. According to the latest edition of the World Bank’s Food Price Watch, a further 10 percent increase in global prices could drive an additional 10 million people below the $1.25 extreme poverty line. A 30 percent price hike could lead to 34 million more poor. This is in addition to the 44 million people who have been driven into poverty since last June as a result of the spikes. The World Bank estimates there are about 1.2 billion people living below the poverty line of US$1.25 a day.

The president of the World Bank has warned that the world is “one shock away from a full-blown crisis”. 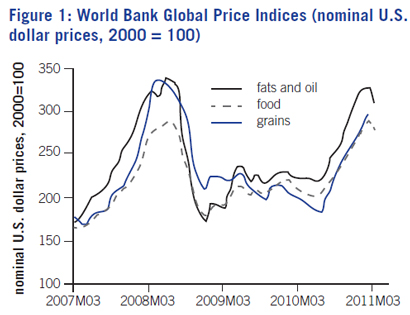 Robert Zoellick cited rising food prices as the main threat to poor nations who risk “losing a generation”. He was speaking in Washington at the end of the spring meetings of the World Bank and International Monetary Fund. Meanwhile, G20 finance chiefs, who also met in Washington, pledged financial support to help new governments in the Middle East and North Africa. Mr Zoellick said such support was vital.

“The crisis in the Middle East and North Africa underscores how we need to put the conclusions from our latest world development report into practice. The report highlighted the importance of citizen security, justice and jobs,” he said.

He also called for the World Bank to act quickly to support reforms in the region. He added that waiting for the situation to stabilise will mean lost opportunities and that’s why revolutionary moments the status quo is not a winning hand. 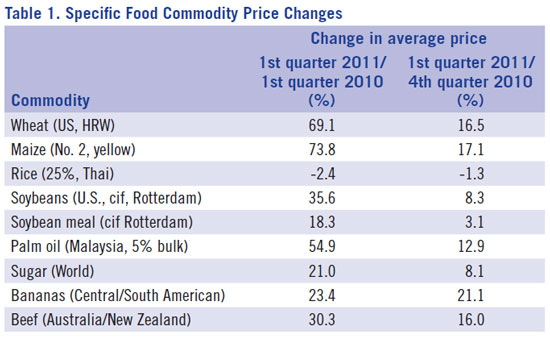 Global Food Crisis, Not Only Speculation

The World Bank’s food price index rose by 15% between October 2010 and January 2011, is 29% above its level a year earlier, and only 3% below its June 2008 peak (figure 1). A breakdown of the index shows that the grain price index remains 16% below its peak mainly due to relatively stable rice prices, which are significantly lower than in 2008. The increase over the last quarter is driven largely by increases in the price of sugar (20%), fats and oils (22%), wheat (20%), and maize (12%). (FoodPriceWatch)

Food prices around the world have been rising sharply. And with floods hitting farmland in places such as Australia, which exports its wheat and sugar cane around the world, there are fears that they could continue to rise. In January, the wholesale cost of food hit its highest monthly figure on record, according to the UN’s Food and Agriculture Organization (FAO). Prices were higher than their peak in 2008, when a food crisis prompted riots and demonstrations around the world. What’s more, oil prices are also edging up, reaching their highest level in two years.

In 2010, severe weather in some of the world’s biggest food exporting countries damaged supplies. That has helped to push food prices almost 20% higher than a year earlier, according to the FAO. (The 2010 figure was slightly below the annual measure for 2008 as a whole.) Flooding hit the planting season in Canada, and destroyed crops of wheat and sugar cane in Australia. In addition, drought and fires devastated harvests of wheat and other grains in Russia and the surrounding region during the summer, prompting Russia to ban exports.

Rice, which is a staple in many Asian countries, hasn’t risen by as much as other commodities because a record harvest is expected this year. Some countries which don’t rely on supplies from disaster-hit exporters haven’t experienced the same price squeeze. Prices of maize in East Africa, for example, where it is the most important food crop, have fallen by up to 50% following bumper harvests. 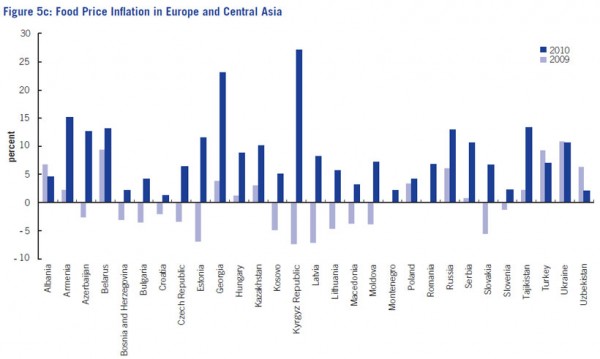 There have also been more localised weather problems. They have received less coverage – but are no less important to farmers and consumers in those areas. Onion prices have soared in India in the past month, following heavy rains in the west, where much of its supply comes from. Like many governments around the world, the government has come under severe pressure to act, as onions are such an important part of the Indian diet.

In Central America, lack of rain has damaged bean crops and caused the biggest individual price rises, according to a recent FAO report. The price of red beans, part of the staple diet in the region, has almost trebled in the past year in El Salvador and Honduras.

Like food, it is difficult to escape the impact of the rising crude prices. It not only directly affects the cost of fuel and energy, but also feeds into the prices of other goods by raising the cost of production and transportation. As many economies around the world struggle to recover from a painful global recession, wages aren’t rising to keep pace. So many are really feeling the squeeze. 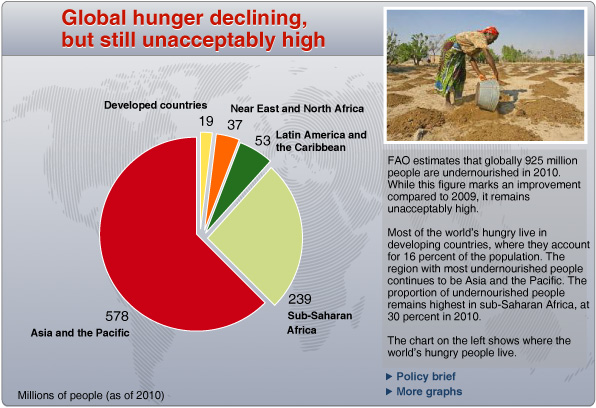 Behind the hunger statistics lie grim realities. About 3.5 million children under 5 in developing countries die from undernutrition-related causes each year. Those who survive aren’t likely to achieve their full potential if their food lacks adequate nutrients, and access to health services, clean water and sanitation is beyond their reach. Nutritionists say there is only a 1,000 day window between pre-birth and age 2 to change the course of a child’s life. “If we miss that opportunity, we miss an entire generation because the damage that happens in the early months is irreversible,” says World Bank Health and Nutrition Specialist Meera Shekar on a World Bank blog.

Economic losses in developing countries with the highest burden of maternal and early childhood undernutrition amount to between 2 and 3% of gross domestic product (GDP). The result is a “vicious cycle where poverty causes malnutrition, and malnutrition perpetuates poverty, “says Tamar Manuelyan Atinc, vice president of the World Bank’s Human Development Network. 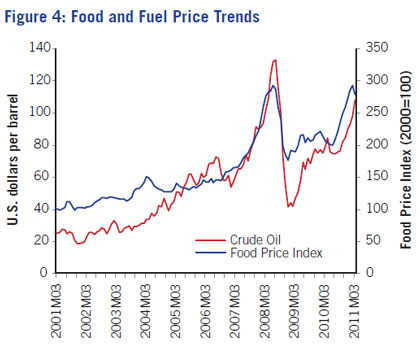 Solutions include not only nutrition-specific measures such as vitamin A supplements, deworming and breastfeeding, but investments that improve food security and agriculture, social protection, health, education, water supply and sanitation, says Atinc.

Adds World Bank Health Specialist Tamer Samah Rabie: “We need to look at the link between the food crisis, poverty and nutrition. The most affected are the poor – those who are already vulnerable to under-nutrition. It’s important to focus on the children who are the future, who will be responsible for most of the productivity in development.” 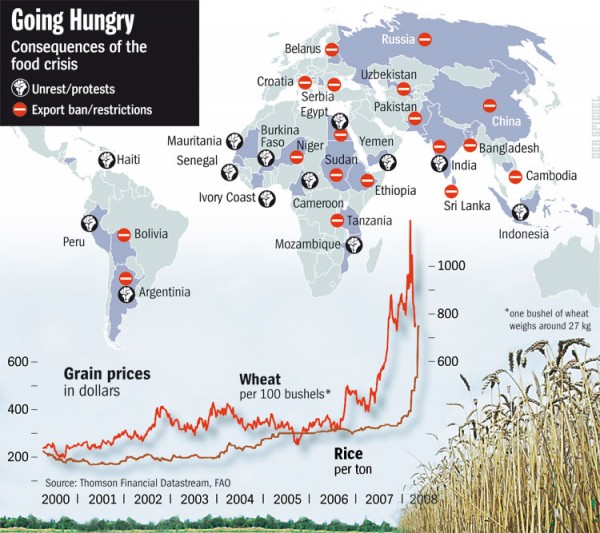 Malnutrition prevalence, weight for age (% of children under 5)

More than one billion people went to bed hungry during the 2008 food crisis. The number stands at more than 925 million now — higher than before the food crisis. The UN’s Food and Agriculture Organization estimates two-thirds live in just seven countries – Bangladesh, China, the Democratic Republic of the Congo, Ethiopia, India, Indonesia and Pakistan – with over 40% in China and India alone. About 30% of Africa’s population is undernourished.