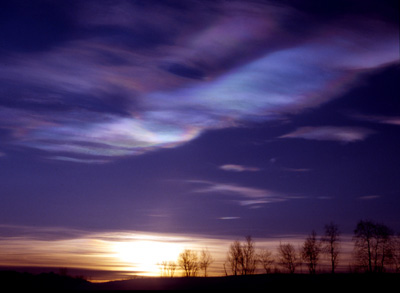 Over the past few days ozone-depleted air masses extended from the north pole to southern Scandinavia leading to higher than normal levels of ultraviolet (UV) radiation during sunny days in southern Finland. These air masses will move east over the next few days, covering parts of Russia and perhaps extend as far south as the Chinese/Russian border. Such excursions of ozone-depleted air may also occur over Central Europe and could reach as far south as the Mediterranean.

At an international press conference by the World Meteorological Organisation (WMO) in Vienna April 5, atmospheric researcher Dr. Markus Rex from Germany´s Alfred Wegener Institute for Polar and Marine Research in the Helmholtz Association (AWI) pointed out that the current situation in the Arctic ozone layer is unparalleled.

"Such massive ozone loss has so far never occurred in the northern hemisphere, which is densely populated even at high latitudes," AWI researcher Markus Rex describes the situation.

The ozone layer protects life on Earth's surface from harmful solar ultraviolet radiation. Because of the low inclination angle of the sun, exposure to ultraviolet radiation is not normally a public health concern at high northern latitudes. However, if ozone-depleted air masses drift further south over Central Europe, south Canada, the US, or over Central Asiatic Russia, for example, the surface intensity of UV radiation could lead to sunburn within minutes for sensitive persons, even in April. Whether and when this may occur can be forecasted reliably only in the short term. People should thus follow the UV forecasts of regional weather services.

"If elevated levels of surface UV occur, they will last a few days and sun protection will be necessary on those days, especially for children," Rex recommends."The expected UV intensity during these short episodes will, however, remain in the range of typical exposure at the height of summer and below the values that occur during holiday trips to the tropics. Extreme caution is therefore unnecessary. "The concern is that people don't expect to get sunburn so rapidly early in the year and consequently don't take sun protection as seriously as in the middle of summer or while on vacation," states Rex. 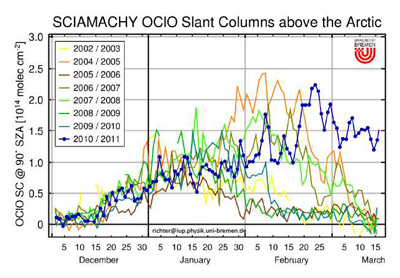 Any sunburn increases the risk of developing skin cancer later in life and this adverse effect is particularly pronounced in children.

"But provided that UV-protection is used it is safe and even healthy to exercise normal outdoor activities even during low ozone episodes. Particularly in countries high up in the north people tend to suffer from vitamin D deficit after the dark winter and Sun is a natural source of it," adds Dr. Esko Kyrö from Arctic Research Center at Finnish Meteorological Institute.

The air masses with very low ozone concentrations will eventually disperse, as the sun warms the stratosphere and the winds change, as happens every year in spring. This will lead to somewhat lower ozone in spring and early summer this year, as the low ozone from the Arctic mixes with other stratospheric air throughout the northern hemisphere. This effect will be small, due to the large dilution of the ozone depleted air masses in background air.

As noted some weeks ago, the Arctic stratosphere has been unusually cold this winter, resulting in a transformation of chlorine supplied by industrial compounds into other forms that aggressively remove ozone. Since then the ozone removal process gained additional momentum by the return of sunlight to the Arctic, which is needed for the chemical processes to occur. The current amount of ozone depletion above the Arctic is far beyond that recorded for any other spring, over the time when ozone has been measured by modern instrumentation. These findings are based on an international network of 30 ozone sounding stations in the Arctic and Subarctic that is coordinated by the Alfred Wegener Institute. 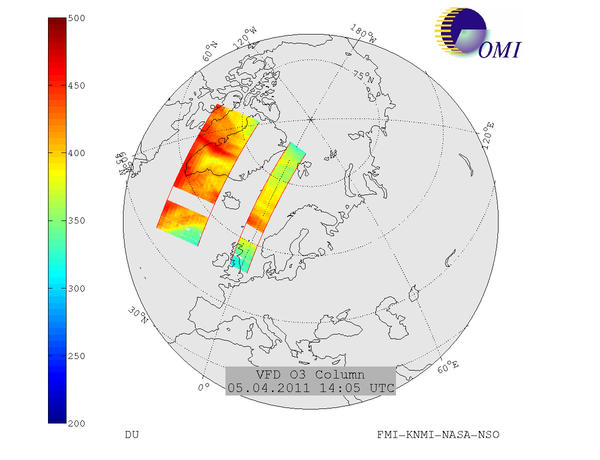 This year's Arctic ozone depletion is caused by industrial CFCs and related compounds. Production of these chemicals was banned by the Montreal Protocol. Ozone loss was particularly large this winter due to unusually low temperature, which results in the presence of clouds in the polar stratosphere. Reactions on the surface of these clouds transform chlorine containing breakdown products of CFCs into compounds that aggressively remove ozone. Even though the Montreal Protocol has successfully banned the production of CFCs and related compounds, chlorine levels in the Arctic stratosphere are only about 5% below the prior peak level, due to the long atmospheric lifetime of CFCs (removal takes 50 to 100 years). The Arctic ozone layer will remain vulnerable to depletion for the next several decades, particularly following unusually cold winters. In contrast, temperatures within the Antarctic stratosphere are cold enough, each winter, to lead to widespread occurrence of stratospheric clouds that are part of the chain of events that causes the Antarctic ozone hole that occurs each spring.

The stratosphere has been observed to cool, following the rise of greenhouse gases (GHGs), because heat that would otherwise reach the stratosphere is trapped below, warming the surface. The situation for the Polar Stratosphere is more complicated because of dynamical heating by waves generated in frontal systems. For several years, however, scientists have noted that the coldest winters in the Arctic stratosphere are getting colder, a development that enhances the ozone-destroying efficiency of the remaining CFCs and could be linked to rising levels of GHGs. "The current winter is a striking continuation of this tendency. Hence, we are not surprised by the fact that such massive ozone depletion has now occurred above the Arctic," says Rex. "Determining the role that GHG driven climate change might play for Arctic ozone loss is a great challenge and the subject of on-going research throughout the international atmospheric sciences community" states Ross Salawitch of the University of Maryland. The European Union contributes to financing this research in the RECONCILE project, a 3.5 million euro research programme in which 16 research institutions from eight European countries are working towards improved understanding of the Arctic ozone layer.

"On the basis of international agreements on protection of the ozone layer, the specifically the Montreal Protocol and its amendments, we expect, however, that ozone depletion due to CFCs will finally become passé towards the end of the century. This is an impressive success of international environmental policy under the umbrella of the United Nations. This success is only temporarily clouded by the record ozone loss above the Arctic this year," says Rex. For several decades, however, the fate of the Arctic ozone layer each spring will be closely linked to the evolution of temperatures in the polar stratosphere. (ScienceDaily)