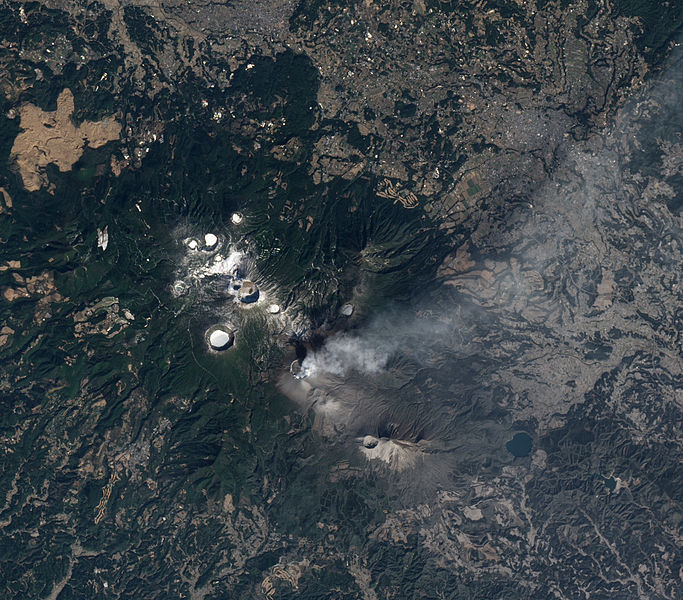 The strongest activity at southern Japan’s Shinmoedake volcano in 52 years shattered windows 6,5 km away, sending hundreds of people fleeing the area. Ash and other volcanic debris soared more than 2 km into the atmosphere above Kyushu Island, about 1500km from the epicenter of the catastrophic 9.0 magnitude quake off Honshu two days earlier.

Officials said it was unclear if the volcanic blast was related to the temblor. Shinmoedake’s last blast was on Feb. 1. Its rumblings resumed on Jan. 19 after the peak had remained dormant for two years.Authorities have maintained a volcano warning at a level of three out of five, restricting access to the entire mountain.

Vulcanologists have been warning that a lava dome was growing inside the volcano’s crater, but were not certain if it was a sign of an impending eruption. Shinmoedake is one of several geologically active peaks in the Kirishima mountain range.(EarthWeek)

During February 2011, a lava dome formed in Shinmoedake’s crater. On February 17, an evacuation advisory was put in place for the Miyakonojo area for 2,500 people after heavy rains threatened to produce lahars, and at least 63 people evacuated.

Shinmoedake is a volcano in Kagoshima Prefecture, Kyūshū, Japan, and a part of the Mount Kirishima cluster of volcanoes. Volcanic experts have sounded an ominous warning about the recent eruptions on Shinmoedake peak, saying they closely resemble highly destructive blasts that occurred there nearly 300 years ago. One of more than 20 volcanic peaks in the Kirishima mountain range on the Kagoshima-Miyazaki prefectural border, Shinmoedake is believed to have formed between 7,300 and 25,000 years ago. 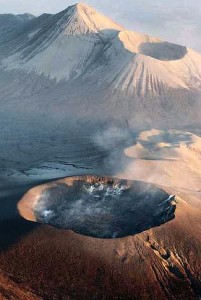 According to experts the eruptions that have taken place since January are explosive eruptions characteristic of phreatomagmatic explosions, which are caused when magma and underground water directly interact. Traces of small pyroclastic flows going down 500 to 600 meters have also been observed on the southwestern side of the volcano.

The magma at Shinmoedake is relatively viscid, according to the experts, as it contains a large amount of silica, a main ingredient of volcanic ash. When the volcano erupts, a great amount of ash is also ejected. The magma also is viscid at Fugendake peak in the Unzen mountain range in Nagasaki Prefecture, where large pyroclastic flows were observed 20 years ago. A large lava dome was observed in the crater at that time, and was the source of pyroclastic flows for a long time. A lava dome sometimes grows larger and larger due to a continuous supply of magma, although there are exceptions. For example, on Mt. Showa Shinzan in Sobetsucho, Hokkaido, lava domes cooled as soon as they formed, raising the height of the peak from 1944 to 1945.

In 1792, Mount Unzen, another Kyushu volcano situated near Shimabara, Nagasaki Prefecture, erupted. The volcano and a resulting tsunami killed around 15,000 people. But an even more powerful volcano in the Kikai Caldera, a series of underwater volcanoes off the island’s southern coast, erupted between 8,000 and 9,000 years ago. Known as the Akahoya eruption, it discharged an estimated 150 cu. km of lava and ash that reached southern Kyushu, causing massive environmental destruction.