2010 - A year of extremes in Changing Climate

The Australian Bureau of Meteorology's Annual Climate Summary for 2010, released yesterday, confirms the year was one of extremes for many parts of the country. 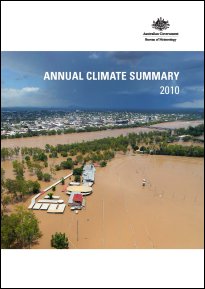 *The year, which began with El Nino conditions in the Pacific before rapidly transitioning to La Nina conditions during the autumn, was Australia's second-wettest on record, after 1974 (also a La Nina year);
*Heavy rains fell in the second half of the year across northern and eastern Australia, making it Queensland's wettest year on record;
*Parts of southeast Australia recorded above-average rainfall for the first year since 1996, providing relief from the long drought;
*It was the driest year on record for southwest Western Australia, continuing a long-term drying trend;
*The widespread heavy rainfall was associated with 2010 being Australia's coolest year since 2001, although it was still warmer than the 1961 to 1990 average;
*The past decade (2001-2010) was the warmest on record for Australia;
*Sea surface temperatures around Australia were the highest on record;
*Globally, the World Meteorological Organization ranks 2010 as the world's equal warmest year, with 2005 and 1998; and
*Global sea levels reached a new high in 2010.

Tropical Cyclone "Seroja" made landfall as a Category 3 storm south of Kalbarri, Western Australia with wind gusts up to 170 km/h (106 mph) on Sunday, April 11, 2021. According to the Bureau of Meteorology (BOM), the storm caused widespread damage, left...