Cascades Volcano Observatory geophysicists have detected a subtle increase in the rate of uplift of the ground surface about 5 km (3 miles) west of South Sister volcano, Oregon, U.S. Episodes of increased uplift have been observed in this area before, and the volcano’s alert level and color code remain at NORMAL / GREEN.

Data from satellite radar images show an uplift of about 2.2 cm (0.9 inches) occurred between the summer of 2020 and August 2021 across an area of 20 km (12 miles) in diameter. GPS data from a volcano monitoring station near the center of uplift measured at least 0.5 cm (0.2 inches) of uplift since August 2021.

Additionally, seismologists observed brief bursts of small earthquakes in October 2021, December 2021, and January 2022. Most of these shallow earthquakes are too small to locate precisely; those located are inside the uplifted area.1, 2 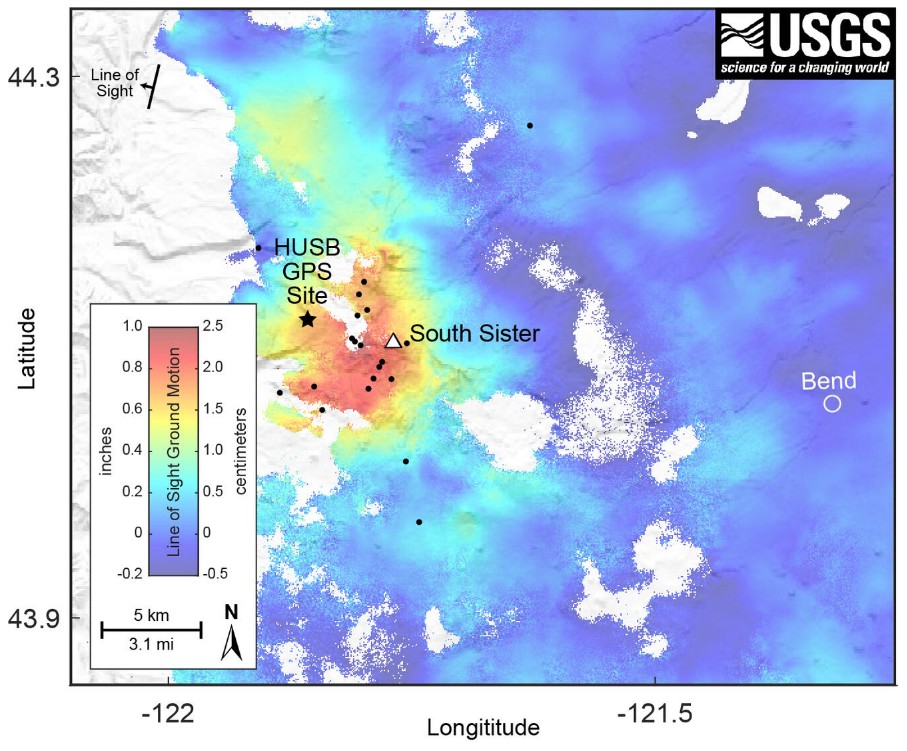 Satellite radar interferogram spanning June 19, 2020, to August 13, 2021, and showing the ground motion in the direction of the satellite. The maximum uplift, indicated by the red color, is about 2.2 cm (0.85 inches), and it is located to the west of South Sister. The HUSB continuous GPS site is marked by a large black dot. Earthquakes that occurred during the time period spanned by the interferogram are indicated by small black dots. Image credit: USGS

The present uplift area is in the same general location where uplift was first seen in the mid-1990s and has continued at a generally slowing rate through 2020.

During the 25 years between 1995 and 2020, the area rose approximately 30 cm (12 inches) at its center. Although the current uplift rate is slower than the maximum rate measured in 1999-2000, it is distinctly faster than the rate observed for several years before 2020. 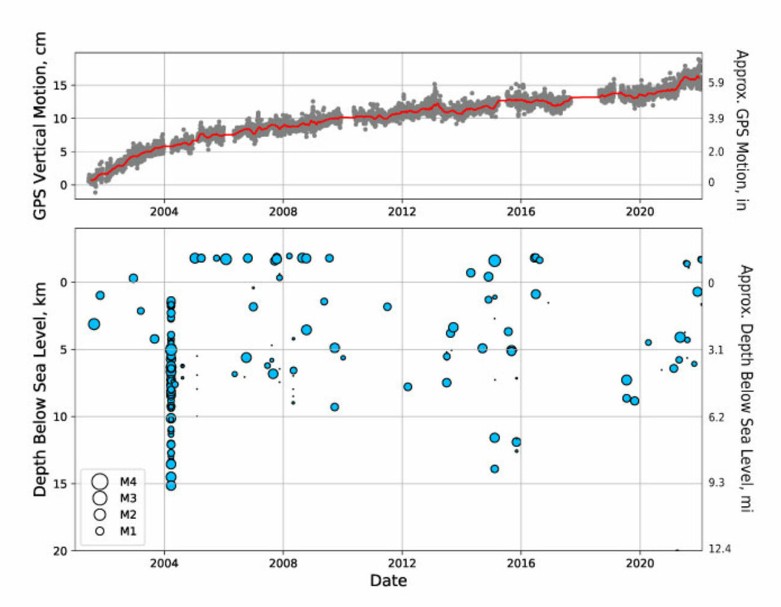 Comparison of vertical GPS motion measured at station HUSB (top) with earthquake depth (bottom). Red line is a 60-day average of the cleaned GPS time series plotted in gray. Earthquakes are plotted with respect to their magnitudes. The swarm in 2004 represents the vast majority of earthquake in the vicinity of the deforming region. Earthquake information is from the Pacific Northwest Seismic Network. Credit: USGS (public domain) 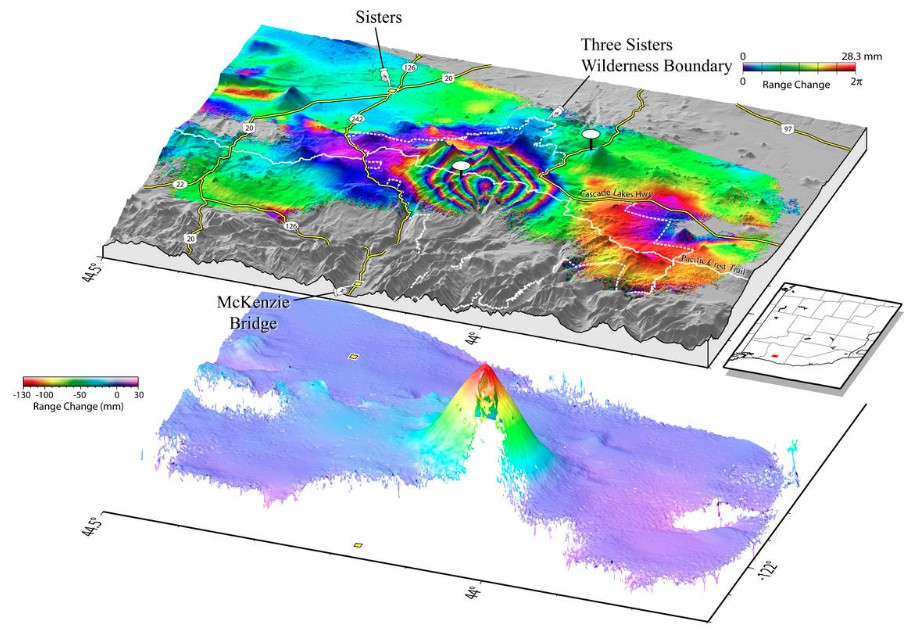 About 130 mm (5 inches) of peak uplift from 1995 to 2001 is shown in this interferogram in the Three Sisters Wilderness. Magma accumulating at about 7 km (about 4.5 mi) depth is the likely cause of uplift. The area of uplift, about 20 km (12 miles) in diameter, is almost entirely within the wilderness area. The two white "thumbtacks" show the location of continuous GPS instruments installed by Cascades Volcano Observatory personnel to monitor the uplift. The last volcanic eruption in the area was about 1500 years ago. Image credit: USGS, Wicks, C.W. et al., 2002

Because the Three Sisters region is a volcanic area (the most recent eruption was about 2 000 years ago near South Sister), the uplift may reflect a small amount of magma emplaced at around 7 km (4 miles) deep.

The idea of repeated intrusions at Three Sisters is supported by a USGS study in 1990 that found evidence that heat and gases from magma had influenced water temperature and chemistry of springs located in the uplifted area. This research was published before satellite volcano monitoring began and well before the current uplift episode.

"In that context, we view periods of increased uplift like the current one as a continuation of episodic, deep magmatic intrusions that have likely been occurring for centuries or millennia in the Three Sisters area," CVO geophysicists said.

While any magmatic intrusion could eventually lead to a volcanic eruption, an eruption would likely be preceded by detectable and more vigorous earthquakes, ground movement (deformation), and geochemical changes. In general, as magma moves upward during an intrusion, it causes continued or accelerated uplift, fractures rock to generate swarms of earthquakes, and releases significant amounts of volcanic gases, such as carbon dioxide.

"We do not detect any of these signs currently."

Glaciers have deeply eroded the Pleistocene andesitic-dacitic North Sister stratovolcano, exposing the volcano's central plug. Construction of the main edifice ceased about 55 000 years ago, but north-flank vents produced blocky lava flows in the McKenzie Pass area as recently as about 1 600 years ago.

Middle Sister volcano is located only 2 km (1.2 miles) to the SW and was active largely contemporaneously with South Sister until about 14 000 years ago. South Sister is the highest of the Three Sisters.

It was constructed beginning about 50 000 years ago and was capped by a symmetrical summit cinder cone formed about 22 000 years ago.